The New Jersey Devils by Corsi After the First 6 Games

Share All sharing options for: The New Jersey Devils by Corsi After the First 6 Games

Vic Ferrari's Time on Ice hosts a number of useful scripts that take the official NHL reports and parses out stats to make it easier to analyze players. One of my favorites, which isn't directly accessible on the front page of Time on Ice, is the Corsi script.   It works mostly in the same way.  Take the game number - the last 5 digits of the boxscore URL of any NHL game - append it in to this URL (an example) and the script will output shot information at even strength play.  It'll not only count shots for and against for when the player was on the ice, but blocks, goals, and missed shots.  It even calculates Corsi and Fenwick (Corsi minus blocked shots), making it useful for game information.

Both Corsi and it's variation Fenwick are good stats to get an idea of who had a positive on-ice impact on puck possession and territorial control in that game.    The main idea is that when a team attempts a shot, they are doing so from an attacking position. Rarely does a team unload shots from the neutral zone or their own end. So even if they miss the net or have the shot blocked, the team at least did the work to get the puck in an attacking situation.  Given that this only counts even strength situations, the team that does that more than other can be said to be the better team.   A player who's driving the offense will have high numbers; a player who's being beaten or in a primarily defensive role with have negative numbers.

Now, it's not a wonder-stat, Corsi and Fenwick just explain a facet of the game.  There's no count unless there is a shot being attempted.  A team that just takes the puck to the corner, pins a team back, but doesn't shoot would have possession and territorial advantage that goes uncounted.  Similarly, Corsi and Fenwick doesn't take into account whether a player is responsible for a shot, miss, block, or goal - just that they are on the ice when it happened.  It's essentially plus-minus for shooting attempts.

As the Devils have struggled, to say the least, I figured it could be somewhat informative to get an idea of who's had the most positive on-ice across all 6 games when it comes to possession.  Take all of the reports so far for New Jersey, sum them up, and see what's up with the team.  Perhaps we can learn a little more about how Alexander Urbom or other players have done so far in this early season.  I'm aware that this would be a lot more meaningful with more games played.  At a minimum, though, I can at least get feedback on what to do when I revisit these totals throughout the season.

Plus, it'll give some insight into what I will be discussing given the team's woes on Rink Side Radio, tonight at 9 PM.

These are raw counts based on reports from Vic Ferrari's scripts at Time on Ice.  For Corsi rates, please visit Behind the Net.   All numbers are for even strength situations, with both goalies in net.

Alexander Urbom was sent down to Albany today, as reported by Tom Gulitti.  Truthfully, Urbom didn't do too bad in his 6 games in New Jersey.  Most of the team is just above even in terms of Corsi; he managed a positive Fenwick; and the Devils outshot their opposition by a bit when he was on the ice.  The three goals against stick out like a sore thumb; but it's not nearly as bad as Henrik Tallinder and Andy Greene.   I don't think Urbom being sent down to the AHL is a bad thing.  Even if he stays there for the rest of the season, he'll still be able to develop his game further against a higher level of competition than the WHL.

Incidentally, I don't know who is more impressive based on this chart: Colin White actually as a plus in 5-on-5 hockey or the Devils having outshot their competition by 10 when Taormina has been the ice.  While Tallinder and Greene have the superior Corsi numbers, their goal differential has been bad (not to mention Greene's sub-zero Fenwick total).  Perhaps it was no accident that John MacLean split up that pair in practice today per Gulitti? 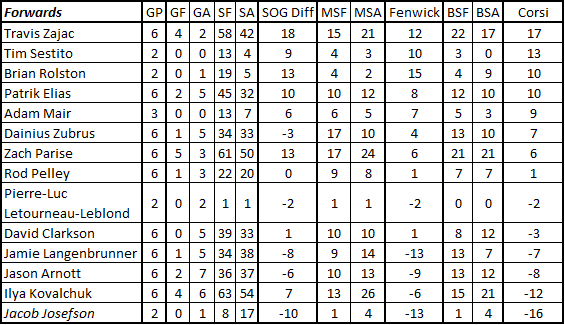 I know some of you are looking at this and about to freak out over current team leading scorer Ilya Kovalchuk being next to the bottom in Corsi.  Before you do, the real culprit here is the sample size.  Kovalchuk was actually positive up until Saturday's game.  In that one, for some inexplicable reason, MacLean moved him with rookie Jacob Josefson and so-far-inconsequential David Clarkson.  Boston beat on that line like a drum, and Kovalchuk suffered with a -15.

The reverse situation of where one player has a higher Corsi total just due to one game happened in that same game.  Dainius Zubrus ended the night at +10, shooting him up into positive numbers.  Not coincidentally, he played against Boston as the right wing to Zach Parise and Travis Zajac.

Back to Kovalchuk, if MacLean kept him with ZIP or put him with some players who are better at possessing the puck, he could have remained above zero and closer to Zach Parise on this chart.   Alas, one game where he was misused and he's this far in the hole in terms of total Fenwick and Corsi count. The strike of small sample sizes, if you will.

Fortunately, MacLean has seemed to wisen up and slot Ilya Kovalchuk with Patrik Elias and Jacob Josefson in today's practice.  Forget the ZIP line, the second line of Elias, Jason Arnott, and Jamie Langenbrunner wasn't working well as a unit.  Elias was getting forward as evidenced in the SOG Diff, Fenwick, and Corsi.  Arnott and Langenbrunner just lagged behind.   It's not ideal since Josefson is a rookie and ultimately a known unknown in terms of his game.  Though, in theory, Elias can be the one driving the play up, Josefson can assist him somehow, and Kovalchuk won't have the weight of the unit on his shoulders alone to generate shots.    It's an improvement over what we saw on Saturday.

Of course, this doesn't give me much hope in a line of Rod Pelley, Jason Arnott, and Jamie Langenbrunner given that Pelley's been the best among the three in Corsi.  If you're looking for players to do the traditional "step up," look no further than the veteran pivot and the captain.

There's some other interesting observations to be had.   Zajac has been the premier puck-mover, not Parise; but as long as they stay together, they'll be back closer together at the top.  While both only played two games and had wildly different ice times, Tim Sestito has so far been more useful than Pierre-Luc Letourneau-Leblond in getting the puck up ice.  Adam Mair had the benefit of a third game, but he's shown his worth over Leblond already.

In any case, I do know that 6 games may not tell us a whole lot in terms of Corsi, Fenwick, or even just straight-up shot on goal difference.   But do share whether you found this interesting, whether you'd like to see more of this feature throughout the season, and what other observations you have based on these numbers.  Please let us know in the comments. Thanks for reading.