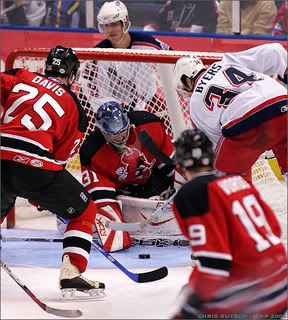 Hockey doesn't come cheap too often, so a chance to see the Lowell Devils of the AHL take on the Hartford Wolfpack - farm team of Our Hated Rivals - for $15 at the Prudential Center was too good for myself and a buddy of mine to pass up.  We got more than our money's worth, getting treated to a night of tense, tough and tenacious hockey, culminating in a 3-2 Lowell win in the final minute... oh, and a line brawl featuring goaltender Jeff Frazee, who was solid in the winning effort, making 28 saves.

After a mostly even first period, Lowell got on the board on the power play early in the second.  Defenseman Matt Taormina wristed one toward that may have been tipped on route, but nonetheless made it's way past troubled former Ranger goaltender Steven Valiquette, who was routinely and mercilessly taunted by the sparse but passionate crowd of 3,276.

Lowell struck again four minutes later, when a harmless drop pass by Matt Corrente (down from the NHL Devils for one night only) to Nick Palmeiri led to a shot that somehow found it's way past Valiquette to make it 2-0.  It also featured one of the two assists on the night for the well-liked Tim Sestito, who also asserted himself as a terrific penalty killer, as Hartford went 0-for-7 on the man advantage tonight.  The second period also featured a fight between Louis Robitaille and Michael Sauer, with Lowell's Robitaille not only handily beating his opponent, but coming out of it all smiles.

Hartford struck quckly in the third, first on a rebound cashed in on by Paul Crowder, and then on an admittedly sweet tip by Dale Weise past Frazee to make it 2-2.  But credit Frazee with maybe the turning point of the period and the game, coming up with a huge save going post-to-post to glove down a Weise chance, a seemingly impossible save.  No one in the crowd came away overwhelmed with the young goaltender, but certainly no one was disappointed with how he played.

The Devils got a goal with a minute to go to win the game, as Palmieri went down the right wing and fired a bad angle shot that somehow made it's way past Valiquette.  It was Palmieri's second of the game, and team leading 14th of the season.  I'll say what I said to my friend after we celebrated that goal, in that it had a distinct odor to it.  Valiquette was not awful tonight, but clearly whatever problems that caused him to get sent down to Hartford have not yet been righted.

Hartford charged at Frazee with the empty net in the final minute, but could get no damage done, even after a misplay by Corrente led him to taking a delay of game minor with 13 seconds remaining.  The game ended with the two teams going at it in a line brawl.  As it was 6-on-4 with the extra skater, Frazee had to get involved too.  The entire bench had smiles on their faces as they came out to greet their victorious goaltender, and most of the fans in the stands did as well.

NOTES: Lowell remains in 3rd place in the Eastern Conference behind Hershey and Manchester, and 2nd in the Atlantic Division behind the Monarchs.  The three stars of the game were Wolfpack d-man Ilkka Heikenen, Sestito and Palmieri.  Hartford and Lowell will meet again at The Rock on February 3rd.  I can wholeheartedly recommend checking it out, and I'm sure Fischer will as well.