As you may or may know, I am a full season ticket holder of the New Jersey Devils.  From time to time, I've got some pretty sweet deals as well as letters from the team explaining what's going on.  In a letter dated January 27, 2010, I received today (that's 3 days later) my 2009-10 Playoff Invoice.  No, seriously.

This may seem like a big pile of hubris.  After all, it's not even the end of January yet and already the team is offering playoff tickets?  That's bold, to put it nicely. However, keep in mind the Devils have made the playoffs in every season since the 1995-1996 season.  Moreover, their record is currently 35-16-2 and 72 points.  Per Sports Club Stats' predictions, the Devils are pretty much a lock to make the playoffs. In James Mirtle's most recent playoff projection from Tuesday, the Devils would need to suffer a major collapse to miss the postseason.

So it's a pretty safe bet that the Devils will make the playoffs this season at this point.

Therefore, season ticket holders, be they full or for a half-season, are getting these invoices in advance to get the first opportunity at securing tickets for the first two rounds of the NHL playoffs.  Per the enclosed letter, they have frozen or reduced playoff ticket prices from last season. This is consistent to what the team did for most tickets at the Rock for this season; which is good to see, in my opinion.  Per the letter, the team is offering a lower price per game  for the first two rounds if the invoice is sent and paid in-full by February 26, 2010.  Let's see how much lower these tickets are as well as if there's any other reason why a ticket holder like myself should pay for the playoffs well in advance of April.

The letter says right at the top that one can save up to 33% if you purchase tickets by February 26.  Let's see how accurate that is.  Here's how the pricing breaksdown, along with the percentage of savings one will actually save.  If you don't know what these sections refer to at the Rock, the official team site has a map of where each section is located. 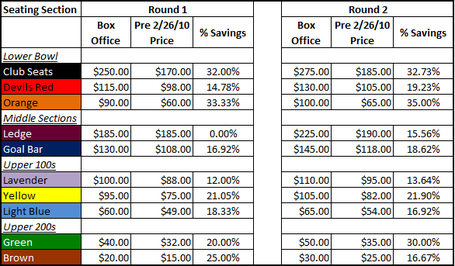 Well, the only way to hit that 33% savings is if you have tickets in the Orange sections and only for round one.  Admittedly, the Devils highlight a savings up to 33%, so they're not wrong.  But given that the savings is larger for the Orange section for round two, it's 35%.  Why not advertise saving up to 35% since that's also technically true?   And is it any wonder what section the team really wants to see filled?  Pretty much every section will see some savings unless you're in the ledge for round one.  Why they'll see savings for round two and not round one is entirely beyond me.   Even the club seats owners get some serious savings, why not the ticket holders in the Ledge for round one?

Aside from that section of the arena for the first round, anyone who pays for the playoffs early will save a significant amount of money per game.  In terms of percentages, the lowest amount of savings in a non-Ledge-in-round-one section is the Lavender sections which yields 12%. In terms of gross savings, the lowest non-Ledge-in-round-one savings is $5 and that's for the cheapest seats in the entire arena, the Brown sections.  These aren't minor cuts for ticket prices for each game of the respective playoff rounds.

My only real complaint about this pricing set up is for the Ledge ticket owners for the first round.  If were willing to pay $185 for playoff seats in the Ledge, then I'd call up the Devils ticket office (the letter includes the phone number) and ask to be upgraded to the Club Seats.  There, I'd get a small savings for the first round ($15 less per game for round one) and access to the Fire or Ice lounges.  Other than that, I appreciate the Devils are giving the season ticket holders a big break in terms of pricing.  They're offering savings and they are serious about them for the most part.  Given that I sit in an Orange section, I really appreciate the savings.

Incidentally, does anyone have a listing of the box office ticket prices from last season? I'd like to know whether a cut in prices was truly made for this season at the box office.  Lastly, I wonder if those on a mini-plan are getting these as well?  I remember getting something like this when I was a half season ticket holder two seasons ago, so I assume they'll get these invoices shortly.  Is anyone else included?

Anyway, to quote a late pitch man, "But wait, there's more!" As an additional incentive for the season ticket holders, anyone who gets these invoices are registered automatically for what the team calls a Fabulous Fifteen Days of Suite Giveaways.  The big one is for February 12, where someone will win a suite to the March 17, 2010 Devils-Pittsburgh game and if I understand this correctly, 10 additional red and green commemorative Devils jerseys will also be given away to 10 other fans. 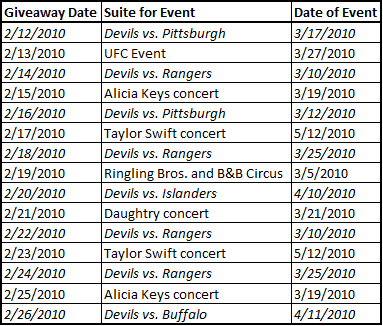 I italicized those dates where games are given away. think it's great that the Devils are giving away suites to mostly rivalry games, and the Devils-Buffalo game is the last date of the season which should prove interesting by itself as both teams are very good this season.  So in case getting cheaper playoff tickets wasn't enough of a draw, winning a suite to a game in the future should help with that.  And if you're interested in the other events, well, all the better.  I personally don't care for the concerts, the circus, or UFC, but I can see where others would jump at the chance to go to those events - much less from a suite.

Plus, I don't think the Devils accidentally scheduled most of these giveaways to take place during the Olympic break.  Good move to give some people a reason to go the official site during those two weeks.

Personally, just with the cheaper prices, I'm going to submit my invoice in shortly.  To that end, the Devils' sell-job for postseason tickets worked.  But then I'm a season ticket holder and clearly a hardcore fan (do you think a casual fan would write this much about the Devils?).  It's not difficult to sell me on the Devils, really.  Therefore, I now turn the issue over to you, the community, for your opinion.  Are you surprised that the Devils are offering playoff tickets already?  If you're a season ticket holder of some sort, do you also like the price reductions?  If you're not a season ticket holder, does this make you want to become one in the future?  Do you like the giveaways?  Please share your thoughts in the comments.