Quick Aside: I hope you enjoyed your Labor Day weekend.  In case you missed it, I did some price comparisons for the Devils' partial plans and mini-packages that they have offered.  You may want to read that before trying to get individual tickets on Sept. 9.

The Hockey News regularly puts out one of the best pre-season magazines with their annual yearbook.  It offer interesting articles, a ranking of players throughout the league, and comprehensive previews of each of the 30 NHL teams.  At a minimum, they provide details about the team's offense, defense, goaltending, rookies, coaching, strengths, weaknesses, and an overall rank.  On top of that, the throw in a ranking of the team's top 10 prospects as well as listing of all players on the roster at the time of print.  It's a good read in advance of the summer.

Now, before I get into the preview properly, I want to point out three things.  First, some disclosure.  I was recently quoted in the Sept. 7th issue of The Hockey News in an article by Adam Proteau about what Devils fans will be excited about for the upcoming season.   I only found out that it got printed after I checked out the Yearbook.   That I got quoted by THN is something I truly appreciate, but it will not affect my thoughts on the preview in their Yearbook about the New Jersey Devils.

Second, in case the Yearbook isn't in your local bookstore, supermarket, library, etc., you can easily get it online through the online magazine retailer Zinio.  Here's the direct link to the Yearbook with the cover for the NY/NJ market.  (And here's the direct link to that Sept. 7th issue I was quoted in, I'm on page 28, for what it's worth.) This leads me to the third item to be pointed out. Look at this cover and tell me what is missing: 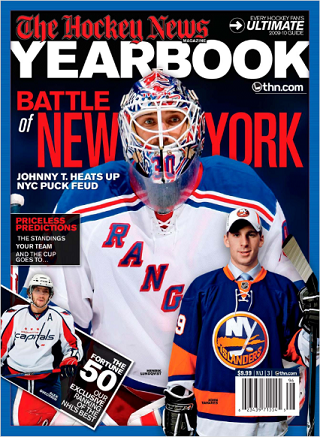 Oh, yes, the New Jersey Devils!  The 2008-09 Atlantic Division Champion New Jersey Devils!   The NY/NJ area hosts a world-class hockey team who has achieved so much success in recent years and is that team on the cover specifically designed for this market?  No!  They aren't referenced at all!  No respect!

I see the point of putting a Ranger (Henrik Lundqvist) and the Islanders' great new hope, John Tavares.  I even see the point at sticking Alexander Ovechkin, one of the league's biggest stars, on the cover. Yet, where are the Devils?! Would it have killed the THN staff to put a picture of, say, Zach Parise on the cover? You know, the Devils' top scorer, the league's 5th best scorer last season, and someone who makes so many ladies "squee" when he's out and about?   talk about a careless error!  Fortunately, this could very well be my biggest slight against the Yearbook.

Now, no one at THN actually did the preview for the New Jersey Devils.  As indicated in the title to this post, they secured the help of Rich Chere, who actually is credited with the preview.  This was an excellent move by THN.  Chere has been covering the Devils for decades for the Star-Ledger.  Like Tom Gulitti, he has a presence online at NJ.com where he reports on Devils news as it happens at the Devils beat reporters blog.    Quite simply, Chere knows the New Jersey Devils very well and won't come up with anything outlandish about how the team will perform.  Since THN got someone who knows the team well, the Yearbook has a well-written, solid team preview.

The main points of the preview are what you would expect from someone who has been covering the Devils for so long. Chere listed the Devils' strengths including the blossoming of forwards like Zach Parise, the importance of Martin Brodeur's goaltending who is completely healthy, and that there's promise on defense due to prospects competing for jobs.   I felt he was a bit vague here; but he nails the weakness section correctly.

Chere wrote that the Devils' biggest weakness is at the center position, specifically noting that the loss of John Madden could be a big one given how important of a role he played for the team.  Interestingly, he didn't dismiss Zubrus out of hand, but wrote that "he can play for short periods, but not an entire season."  Hopefully, Zubrus can step up and do so, because I'd rather see that then Patrik Elias or Brian Rolston play center.   Yet, I can't help but agree that filling in Madden's spot is a potentially big problem.

I'm glad Chere highlighted the issues at center as opposed to, say, doom-saying about Jacques Lemaire.  There is reason to be concerned how Lemaire will perform as head coach, whether or not he will hold the offense back.  Chere did not write that Lemaire absolutely will revert back to a defensive style, stating that it is "doubtful" that he will use tactics similar to Brent Sutter.  This language is an important distinction as no one outside of Lemaire and Lou is really sure how Lemaire will run the team.  It's shows thoughtfulness as Chere did not revert to just assuming that Lemaire will absolutely be an ultra-defensive head coach.

Overall if you've been following the team very closely, then the preview won't give you too many new insights.  You know that it will be important for the defense to stay healthy, especially with the likelihood of Rod Pelley taking over John Madden's spot.  You know that the Devils has and will likely keep their cap space to make a trade should it be necessary.  But it's great that Chere pointed all this out for those who haven't been following the team closely through the summer, as well as reminding the die-hards what the situation is for the team.   That's the sign of a great team preview: it's a comprehensive reference of the team's assets, issues, and concerns without droning on and on.

THN has set up a great template to provide all this information, and Chere did a great job providing all of this information in a brief, two-page manner.   I wouldn't be surprised if this turns out to be the best Devils preview I have read before the season.

Earlier in August, THN's website revealed where they predict where the Devils will finish: 5th in the Eastern Conference.   I don't know if this was Chere's prediction or the THN staff's prediction, but when it went public online, I said it was a reasonable prediction.  Given what I read in the preview, I still feel that way.   Most of you did not, as the poll revealed that 64% of readers felt the Devils will finish higher than fifth place  Well, the THN Yearbook previews did have an excellent spin on the prediction you may be more agreeable with.  Each prediction also offers a "best case" and a "worst case" scenario with a quick blurb as to what would lead to those two positions.  A minimum and maximum predicted finish, if you will.

The prediction is still fifth in the Eastern Conference; however, if "Rolston scores 30, and Brodeur stays healthy" then the Devils could end up in second place.  Again, I think those of you in that 64% will be pleased with second place in the conference. Yet, if "Lemaire style stifles rising offensive stars," then the Devils could end up in eighth place - something not too many would be satisfied with.  Because of the format of these rankings indicates a range, it allows for leeway in arguments for the best or worst case scenarios.  I don't agree that the Devils will necessarily drop so far if Lemaire's style is stifiling; but I do agree that if Rolston becomes an impact player on offense, then the Devils could certainly place higher than fifth.   Regardless of the particulars, let me point out that whoever came up with the predicted finish has the Devils making the playoffs in either case.   I don't know whether Chere did contribute to this prediction or not, but whoever came up with it certainly isn't doubting Lou. Always a smart choice.

Again, this is a well-written Devils preview, which should surprise no one as it came from Rich Chere.  Again, good job to Chere and good job to THN for getting him to do the preview.  If you're looking for a solid reference on how the Devils  - or any other team for that matter, the other previews are pretty good from what I read - are doing going into 2009-10, then you won't be disappointed with the 2009-10 THN Yearbook. Well, except for the cover of the magazine.  I really enjoyed the preview that Chere put together, and I don't know if I'll see a better one this month.

Now it's time to have your say.  Have you checked out the 2009-10 THN Yearbook, and if so, what do you think of the Devils preview?  Do you agree that Chere did a fine job, or not?  Do you like the prediction range THN offers?  Were there any points Chere made that you don't agree with? Are you annoyed as I am that there are no Devils on the cover for the NY/NJ market? Let me know what your thoughts are about this preview in the comments.