Share All sharing options for: The New Jersey Devils' Best Draft Year Ever: 1990

Today at From the Rink, Mirtle has highlighted the 1989 draft class by the Detroit Red Wings, arguably the single best draft year by a team in terms of games played.  Of all 14 players picked, 7 players got to the NHL and 4 of them topped 1,000 games in their career.  Mike Sillinger, Dallas Drake, Nicklas Lidstrom and Sergei Fedorov are the class of the, well, class and look for Lidstrom at a minimum to continue adding to that total number of games played.  That class was boosted by a solid career from Bob Boughner and Vladimir Konstantinov, who was definitely skilled enough to play for ages if it wasn't for that awful accident he was in.   Still, all the players from that draft by Detroit played in a combined 5,721 games - and counting provided Lidstrom and/or Fedorov keep playing.

Just breaking into the NHL is difficult enough as-is.  OK, Sillinger and Drake were never stars; but to stick in the league as long as they did is a testament to their skills and work ethic.  If a prospect is able to make it into the league and stick around for even a little bit, you can call that pick a success if only because so many aren't able to crack a NHL roster.  Still, 5,721 games from 7 players is not only a record but most likely an unbreakable one for the foreseeable future!

So this got me thinking, what was the best draft year by the New Jersey Devils in terms of games played?  No year by the Devils comes close to 5,000 combined games much less 5,721; but the Devils have a good reputation for drafting, so it's an interesting question.  After checking the numbers at HockeyDB, it was also the same draft year where the Devils had the most of their picks play at least 1 NHL game.  I am talking about the famous 1990 draft by the New Jersey Devils, where 10 out of the 14 picks made it into the NHL.  The 10 players - 3 goalies and 7 skaters - combined for 4,016 games (and counting due to Mr. Brodeur). 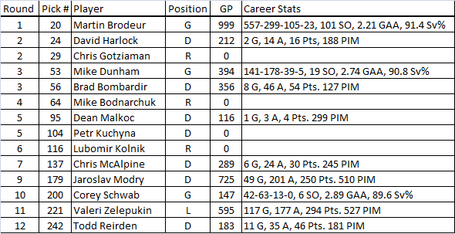 There's so many remarkable points to make about this draft.  The biggest one is that all of 10 of the players who eventually did break into the NHL played at least 100 games.  That's not just something small like Frederik Bremberg's 8 NHL games (he was the third player from the 1991 Devils' draft to make it, the other two being Scott Neidermayer and Brian Rolston).  No, these are players who were able ply their trade for a little while. That's some excellent foresight and projection the Devils scouting department, even if the players didn't play those games in Devils red.

That this list includes three goaltenders is also really impressive.  Think about it. Goaltenders don't play every game to begin with.  They generally take longer to develop, needing experience to truly get better before stepping into the biggest hockey league in the world.  Even Martin Brodeur saw significant time in the minors and didn't really break through until the 1993-94 season, 3 seasons after this draft.   Then you had Dunham and Schwab sitting behind Brodeur!  Yet, all three eventually found playing time elsewhere - Dunham was a starting goalie for Nashville when they entered the league, Schwab became a backup goaltender.  Combined, they represent a remarkable 1,540 games, or 38.3% of the total amount of games by this draft year.  The Devils may not have drafted many goalies since then - only 12 after 1990 - but in hindsight, they really didn't need to draft many more!

Third, notice all of those defensemen!  7 were selected out of the 14 in 1990; and only Petr Kuchnya didn't make into the league!  The most recognizable names from this year are Jaroslav Modry and Brad Bombardir; yet the other 4 did make their respective marks in the league.  Clearly, they (and the goalies, of course) fared better than the forwards.  Valeri Zelepukin is not just only the offensive leader from this draft class, but also the only forward from the 1990 draft year to make it to the league!  Zelepukin was a useful forward, good for secondary scoring; and that helped him stick around for nearly 600 games.

Still, you really can't complain about a draft year where 10 out of the 14 prospects selected eventually make into the NHL and play at least 100 games, especially when it's featured by the one of the greatest goaltenders ever: Martin Brodeur, who will break 1,000 games this season.

This leads me to another point: while the players from this draft combined for a total of 4,016 games, as of right now, it's the only draft year (out of 7) by the Devils where the players combined for over 2,500 games that does not have a player that played a 1,000 or more games.  Martin Brodeur will break that mark in 2009-10 for sure.  Yet, that  the total topped 4,000 without one player taking 1,000+ games speaks to the spread of games across all the players.  The closest total to this mark was the 1992 draft year, led by the now-retired Jason Smith (1,008 GP) and assisted by Stephane Yelle (921), Sergei Brylin (765), and Cale Hulse (619) - the players from that year combined for 3,638 games.  That's an extremely successful draft by itself, it's not dominated by one player; yet I think it puts a total of 4,000 combined games in perspective.

10 out of 14 picks making into the NHL and those 10 combining for 4,000 games - it's a rare feat and it should be respected as such.  The 1990 draft by the Devils is the best draft year in franchise history and should be regarded as one of the best in NHL history.

Finally, just for kicks, I put together the total games played by all of the Devils draft picks by draft year, from 1982 to 2004 (I stopped there as prospects are still coming in from 2005 onward).  The draft years from 1993 and onward will add to their game counts as the Devils did unearth a few veterans.  Feel free to look upon this chart in awe of how the Devils did in the 80s and early 90s, get a better feeling about the 1996 draft (thank Colin White and Willie Mitchell) and 2000 drafts, and lament how bad the 1997 draft ended up. (Note: Had Clemmensen not play all those games in 2008-09, then Jiri Bicek would be the leader from that year. Yes, Jiri Bicek.)

Again, all Devils draft history and stats came from HockeyDB except for the career goalie stats, they came from NHL.com.    Let me know what you think about all of this in the comments.  Again, thanks for reading!