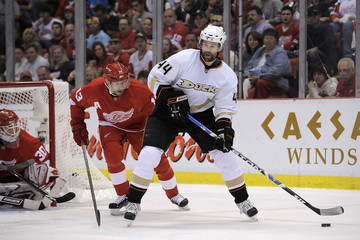 As Tom Gulitti pointed out, the Devils have finally found a depth centerman to help out while Patrik Elias is out, as well as a potential replacement for John Madden as the team's checking pivot.  The Devils have signed free agent Rob Nidermayer to a contract, the terms of which have yet to be disclosed.  General Manager Lou Lamoriello comments, as per Gulitti:

"I felt that we needed a little size and strength down the middle and now with Travis [Zajac] and [Dainius Zubrus] and Robbie I think we've got three pretty good size-strength center icemen.  We know Robbie very well, of course. We played against him in the Stanley Cup [in 2003 with Anaheim. He's one of those forwards that can be used in different roles."

Niedermayer is a Stanley Cup Champion (he played a big, defensive role in Anaheim's '07 Championship) and definitely feels like a Devil-type signing.  I'm alright with this.  I'm sure Fischer will throw in his two cents later.  But this is a good depth move.  It's safe to say that as a team, we are equal at the center position from last year.  I know it may be sacrilege to say, but Niedermayer's as good a defensive center as Maddog was, and is also solid on faceoffs.  We'll likely have more on this later in the day, particularly if we hear more from Lou, Lemaire or even Niedermayer himself.  Stay tuned, and give us your thoughts in the comments.