How Young is Too Old? The Debut Ages of Current New Jersey Devils

Share All sharing options for: How Young is Too Old? The Debut Ages of Current New Jersey Devils

Aside: Welcome Steve Lepore to ILWT in his first post.

With the New Jersey Devils not making much movement in free agency this past summer, this September's training camp is particularly important for a number of prospects in the system.   Whereas the Devils had all 12 forward and 6 defensemen spots already filled as well as extras ready last September, there are spots for the taking the roster.  Nicklas Niclas Bergfors, Matt Halischuk, Matt Corrente, Pierre-Luc Letourneau-Leblond, and others have a more reasonable chance staying up in New Jersey with a good training camp and a good preseason.

In fact, 19 year old center Patrice Cormier has been centering two veterans in camp for the past two days. According to Gulitti's reports today, Cormier's not reading too much into it and Jacques Lemaire says that these will not be the team's lines in games - with a line of Zach Parise-Travis Zajac-Brendan Shanahan, I believe Lemaire. This is the right attitude; these are just practices, drills, and scrimmages right now.  Important ones to do your best to impress the coaches and be slotted for preseason action, but they aren't signs that he'll be on the roster come October.

The New Jersey organization is known for being patient with their prospects.  It's not completely unheard of for a Devils draft pick to make it in New Jersey before hitting 20 - Petr Sykora and Scott Gomez being quick examples that come to my mind.  But more often than not, the Devils will keep their prospects in junior/college/Europe until they feel they are ready for AHL hockey or until they get too old.

So it's entirely possible - probable? - that Cormier would return to Rimouski for his final year of junior hockey.  With respect to Lowell prospects like Bergfors and Corrente, is it fair to think that this is a make-or-break camp?  Would starting in Lowell for another season be seen as a failure?  Is it truly now-or-never for these prospects?  To answer that question, let's see how old current Devils were when they debuted and stuck in the NHL.

Now, last season, the Devils had 14 players on the roster who made their NHL debut with New Jersey at one point or another.  The idea is to see old these Devils were when they played their first NHL game and when they had their rookie season, where they played at least 23 games.  This way we can see about when we should see prospects start becoming players or not, such as Niclas Bergfors (age 22), Matt Corrente (age 21), Tyler Eckford (age 23), and Matt Halischuk (age 21).

To keep things simple, I am only looking at their age by years as well as Devils who started within the franchise. That's why you'll see undrafted players like John Madden, Johnny Oduya, and Andy Greene; as well as Brian Rolston and Brendan Shanahan; but not Bobby Holik, Dainius Zubrus, or Mike Mottau (debuted with Our Hated Rivals).

Lastly, I'm focusing on skaters - goaltenders will be called up to fit need instead of performance issues.  Plus, I'm not confident that Jeff Frazee will unseat Yann Danis for the back up spot. 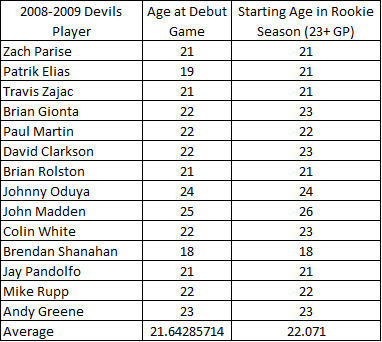 Now, there are some extremes here - Brendan Shanahan jumped right into the league whereas John Madden started his college career late and got some seasoning in the minors before becoming a regular.  Yet, for the most part, if the Devils think you're ready for the NHL and there is room on the roster, then you'll be playing after a few years of development.  Paul Martin, Zach Parise, Travis Zajac, Jay Pandolfo and Johnny Oduya were examples of this phenomenon. The average age for a Devils' debut game with the team is about 21-22 years old, with the average finishing just over 22 years old for a full season.   This fits with the idea that the Devils don't rush their prospects; Shanahan being an exception because, well he's Shanahan.

Come to think of it, I think the last Devil to debut and make it as a regular player before turning 20 was Scott Gomez.

Incidentally, the only player on the current Devils roster to have had a 2 year separation between first NHL game and their rookie season with the team is Patrik Elias.  Should Niclas Bergfors make the New Jersey Devils and stick with them for at least 23 games, he'll be the second as Bergfors played his first game for New Jersey at age 20 two seasons ago.  Devils prospects who played their first NHL game last season include Halischuk (age 20), Patrick Davis (20), Petr Vrana (23), and Pierre-Luc Letourneau-Leblond (23).

Tyler Eckford should be comforted by the fact that Andy Greene, John Madden, and Johnny Oduya are "late bloomers."  Actually, all the prospects should be so comforted as if they're willing to work hard and look to improve, then they may eventually get a NHL regular spot. Mike Mottau is living proof in this regard.  Incidentally, they should also look to Pierre-Luc Letourneau Leblond (currently 24) and Ilkka Pikkarainen (28, no NHL games) as examples.  They are two older players who could very well make and stay on the team to some respect (and it could have been 3 if Petr Vrana stayed over here).  At a minimum, they'll raise these averages considerably!  Still, the larger point is that there isn't always a set age that a player has to "make it" by.

Of course, there's always an exception to that as I think the time is now for Bergfors, who I think has the most pressure being a former first round draft pick and he's been through this process many times before.  I don't think the Devils should necessarily quit on him if he doesn't show enough to make the team, but you have to wonder why he didn't when the Devils are going through a "youth movement." There are spots available on the bottom six at least, and his offensive skills do set him apart on paper from tough guys like Leblond and Pikkarainen as well as fellow Lowell forwards Halischuk and Vladimir Zharkov.    He's made his debut in the NHL, he has shown he's got enough talent to get some NHL games, now it's up to him to prove he can handle the load for more than just call-up duty.  If not now, then when?

For the other prospects, there are mitigating factors to consider.  Some prospects are still in college, like Brendan Burlon, David McIntyre, and Matt Hoeffel.  They won't be available in camp until they graduate or if the team feels they're ready to step in.  Others are still new to professional hockey like Alexander Vasyunov, Patrick Davis, and Zharkov, who just finished their first years in the AHL. There aren't so many spots for Corrente and Eckford available with the number of defensemen on the Devils roster, so while they can make their case, another year in Lowell wouldn't be as bad.  Per the Devils' cap chart at CapGeek, there very well could be multiple spots available on defense next September for these two (and others?) to step in.  As for Frazee, well, goaltenders take longer to develop anyway so he's got all the time in the world as Martin Brodeur continues running the show in net for New Jersey.

Regardless, based on the past history of recent Devils regulars, being 21 to 22 years old seems to be the right time to play your first NHL game as a New Jersey Devil as well as to play significant amount of games.  There are exceptions in both directions of the age scale and there's no "set time" you have to make it by.  That said, this really should be the camp for Bergfors given how many chances he's had, his skill set, and the fact that the Devils want to try out the youth.  Likewise, other prospects should have a good chance to either make their NHL debut or get some significant time in New Jersey should they earn it training camp and in preseason as most of them are 21-23 years old.

And Patrice Cormier will live on to fight for a spot another day should he end up back in junior.