Introducing: Steve Lepore of Puck the Media to In Lou We Trust

Share All sharing options for: Introducing: Steve Lepore of Puck the Media to In Lou We Trust 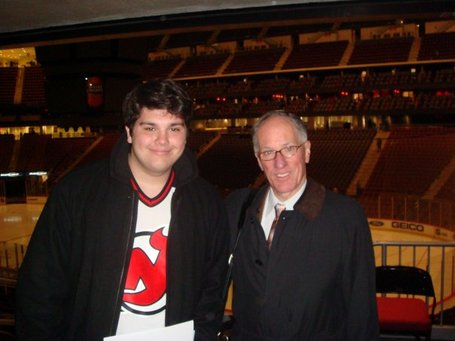 Hi there.  I am Steve Lepore, the editor for Puck the Media, a premier blog about the media coverage of the NHL.  If you want to know a little bit about my personal history as a Devil fan, check out this post.

I'm basically here to be the third man in, the middle-man between Tibbs' awesome morning stuff and Fischer's rocking around the clock.  This will be around the time of day you'll see some of my stuff.  Game threads, immediate pre- and post-game stuff (For example, if an injury or lineup change occurs after Fischer's pre-game rallying, it'll be me) and immediate game reactions, in addition to what will be the continuing of Fischer's fantastic post-game wrap-ups.

Not enough?  Well, here's a breaking story on my first post: The Devils-Islanders pre-season game on September 23rd will be produced by the Islanders and televised by MSG Plus in HD.  Meaning the Devils have two (count 'em, two!) pre-season games on TV.  That's just the kind of inside info we hope to give you all.  Every now and then, that is.

I'm really looking forward to the opportunity to write about the Devils again.  I've been feeling a little on empty at Puck the Media, with so little to report about the media and so much going on in Devil-land that I couldn't use that entity to comment on.  Rest assured, I'm sticking at Puck the Media.  It's not that hard to do.  But this will become a priority for my editorializing and general hockey stuff, unless there's a story about Doc and Chico.  Which I'm totally hoping for.

Our first assignment?  I'm headed to the L-Devs - Wolfpack game on Wednesday at The AmeriHealth Pavillion (a.k.a. the Devils' practice rink, the Mini-Rock), so I'll have thoughts (maybe photos?) from that event on Wednesday.

Finally, a little general personal info: I will post music videos occasionally, because I'm totally Buccigross-ian in my belief that Patrick Marleau will be traded hockey and rock and roll go together like Patrick Marleau and another team peanut butter and jelly.  I work at the Meadowlands.  Remember that place?  I'm an usher at Giants Stadium and the former arena (the Continental Airlines Arena Izod Center), where I work games and concerts.  I may use those experiences to talk about the Devils here (i.e. the atmosphere at Nets games vs. Devils games).  My favorite Springsteen song is "Tenth Avenue Freeze-Out".  I love punk rock, Mr. Show, and cute girls with a sense of humor.  My e-mail address is SMLepore AT comcast DOT net if you need to know anything else.  Thanks to Fischer and Tibbs for welcoming me and letting me invade their home ice, and I'll be talking to you all again soon!