Chuck Gormley wrote last summer's New Jersey Devils preview for The Sporting News' 2008-09 Hockey Yearbook, which is available for sale online through Street and Smiths.   In it, he wrote the preview itself as the magazine slotted the Devils to finish fourth in the Atlantic Division. On the old site, I reviewed that preview here; I found it to be a bit pessimistic as Gormley had fairly positive things to write about the team yet the prediction was that the team will finish either just barely in or out of the playoffs.
A season of 51 wins and an Atlantic Division later, Gormley has written the Devils' preview for this summer's Sporting News Hockey Yearbook. How does the magazine rate our favorite hockey team prior to preseason?
First and foremost, the Sporting News' yearbook can really call itself a "hockey" yearbook as it does have a few features such as a preseason ranking of college teams.  However, the meat and potatoes of the yearbook is the NHL.  One thing the magazine got right over The Hockey News' NHL Yearbook is the cover for the NY/NJ market: 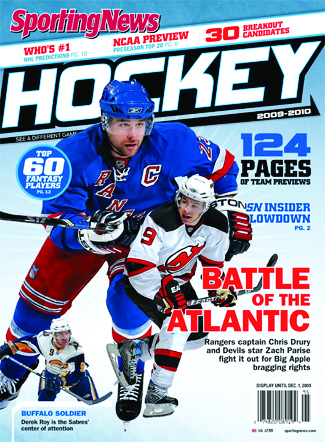 See? There's actually a New Jersey Devil on the cover.  One of the most popular, in fact, it's Mr. Zach Parise.  Seemingly skating away from Chris Drury and his gigantic contract (and ignoring the tiny Derek Roy in the corner).

Now, let's get into it with Gormley's actual words within the preview.  Gormley, by my count, wrote the previews for 10 NHL teams - the Atlantic and Northeast divisions.  From what he's written, I'd say it's somewhat competent. I wouldn't say he is as knowledgeable as Rich Chere, who wrote the preview for The Hockey News.  But I think that's OK, as Gormley doesn't follow the Devils regularly like Chere does; he is the beat writer for the Philadelphia Flyers for the southern New Jersey-based Courier Post.

That said, Gormley gets most of the Devils right.  He notes who did well (Parise, Elias), who didn't (Rolston), and tips David Clarkson as the team's prime candidate for a breakout season.   With respect to coaching, it should be forgiven that he assumed Jacques Lemaire would make the Devils a more defensive team.  He, like most other writers of these previews, wrote them in advance of what we're just learning about how Lemaire is handling the team.   I'd give Gormley points for stating the basic truth - a begrudging one to a point - that coaching alone won't make the team better.

Overall, the preview has a bit of a pessimistic tone.   There are multiple statements of players getting older and getting worn down.  After stating how disappointing Brian Rolston was last season, Gormley doesn't even entertain the possibility of him having a comeback season. Perhaps he implied it?  I don't know.  He notes the Devils defense is run of the mill behind the first pairing.  And the preview ends by stating that Martin Brodeur hasn't taken the Devils beyond the second round since the lockout.  (Aside: This is a statement that can be but won't be made for Henrik Lundqvist or Roberto Luongo. Also, I didn't know it was Brodeur's fault alone the Devils didn't advance?)  It's not that these are untrue statements; but it is a more negative look at the team.

However, there are a few head-scratching moments for Gormley's preview.  First and foremost, apparently Paul Martin and Colin White were the Devils' top pairing on defense last season.  I guess Johnny Oduya is only "run of the mill" on the Devils' blueline? I thought it was obvious that he was a revelation on the Devils' D last season. But this is a serious error, especially when you consider that Martin's partner was Oduya for over 42% of Martin's ice time last season according to Dobber Hockey.  Even if you didn't follow the team all last season, all you had to look at the Devils' defenseman average time on ice at NHL.com.  Martin and Oduya were the only ones to average over 20 minutes of ice time and the two were often featured together on even strength. How do you miss this unless you haven't seen the Devils at all?  Relying on someone who is absolutely clueless? Second, given that Gormley doesn't mention a Rolston comeback; he did note that Dainius Zubrus needs to step up after a poor season.  Not that's not true; but why mention Zubrus but not Rolston?  Is Gormley that down on Rolston?  It makes no sense to me. Third, that statement about Brodeur not taking the Devils further in the playoffs? That's how the preview ends.  No prediction of playoffs from Gormley or overall concluding statement. That's it.  I guess Gormley and the Sporting News wants you to piece it together?

Yet, those moments aren't what makes it a poor preview.  How the Sporting News put this together really make this one an eye-roller.  Spelling errors for names, namely Zajac became "Zajak" and Salvador magically got an "e" at the end of his name.  That's just sloppy editing.  I know I'm not perfect; but I also don't have a copy editor. who should be on the watch for those kinds of careless errors. I don't know if Gormley had any input on the joining graphics and sidebars within the preview, but whoever did definitely wasn't paying much attention.  On the first page of the preview, there's a big "starting six" graphic as to highlight the top players on the Devils.  A good graphic if right. Here's how they slotted the Devils.

This is not a joke!  I know the idea has been floated to have Patrik Elias play center, but Jamie Langenbrunner is definitely not a center! And he never was in NJ!  This is just a very careless error.  Another one would be their additions and subtractions section that summarizes the Devils' offseason.  This isn't completely right either; but the irritating omission is Ilkka Pikkarainen being signed - something Gormley specifically mentions in his preview!  Again, just a careless omission.  Lastly, at the end of all this, the Sporting News is predicting fourth in the Atlantic division for the Devils.  Once again, the preview itself does not specify if they're calling for the Devils to make the playoffs.  Why is this such a hard thing to add?  If you look at each team's overall scores (based on what, I do not know), the Devils are tied with Buffalo with the 6th highest mark in the conference; so I guess they think they'll get in? And why do they think the Devils will finish behind Pittsburgh, Philadelphia, or the Rangers? Even a simple statement of "they just didn't get better than the other teams" would have sufficed as it would have been at least something.

Now, I don't agree that the Devils will finish fourth in the Atlantic - I think the Devils will once again prove Gormley and The Sporting News wrong.  On it's face, in a team preview, I can accept that point of view if it's supported well enough.  But I don't think Gormley goes all the way in supporting it; or explicitly stating why the prediction is as low as it is.  Plus, that point of view is joined by some really bad errors due to laziness.  I can't really say this is a good Devils preview that is worth your while.  How do you get simple things like Jamie Langenbrunner's position or Paul Martin's defensive partner wrong if you're basing the preview based on last season?

Incidentally, when I went to a local bookstore, I only found this and the Hockey News' yearbook available on the magazine rack.  Were I to recommend one over the other, I'd definitely would go with the Hockey News' offering this year despite the Sporting News actually putting a New Jersey Devil on the cover.  Chere is not only more knowledgeable, THN's effort is without careless errors. If you would like to agree or disagree, feel free to leave a comment.   If you want to check out the magazine yourself, it is available online at Street and Smiths through this link for $7.99.