With training camp closed to the public, Gulitti and Chere are your best sources for how the New Jersey Devils are performing in practices and in scrimmages.  They're also getting the quotes directly from the players as they ask them.  Examples include, Chere finding out that Ilkka Pikkarainen will stay in North America if he doesn't make the New Jersey roster and Gulitti learning from Dainius Zubrus that he wants a "more set role" under Jacques Lemaire.

That said, I do have one item of (possible) interest - even if it's not "hard Devils news and analysis."  Yesterday afternoon, the New Jersey Devils held a barbecue for season ticket holders.  Given that the weather was cloudy with off-and-on showers, the event was held inside the Rock.  Attendants enjoyed free food & drinks - and not really cheap food, but really solid hot dogs and burgers and cookies and such; some entertainment; check out the seats and the Fire & Ice Lounges; and got to see the players for a few hours on the lower concourse.  Autographs were not allowed, but pictures were most definitely allowed - so I went ahead and took numerous photos of the event.  Pictures, of course, are after the jump.   The Devils official site has their own photo gallery; so these one are more personal in that I'm in them.

Overall, this was an excellent idea and I'm thankful the organization did this.  I liked it a lot more than just a free gift as it was an opportunity for fans and players to mingle with each and enjoy a nice afternoon outing in advance of the season.  Hopefully, this becomes more of an annual event.

Outside of the Rock, the soon-to-be Championship Plaza was still under construction and fenced-off.  In the past two seasons, it was literally just a blacktop space with nothing there.  Now, it at least has a big, metallic statue of a non-descript ice hockey player. 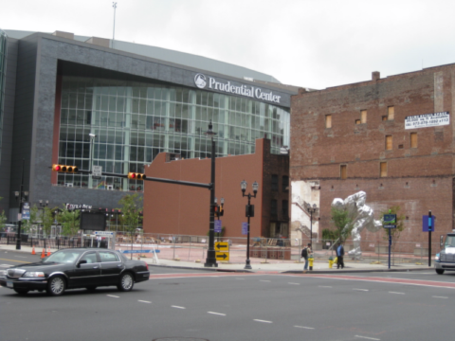 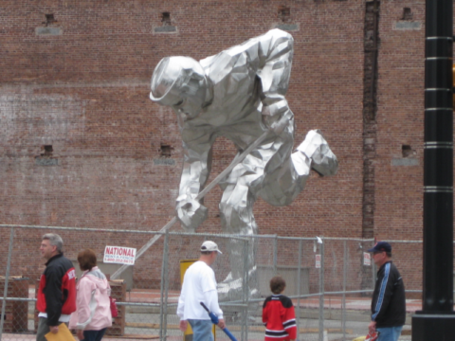 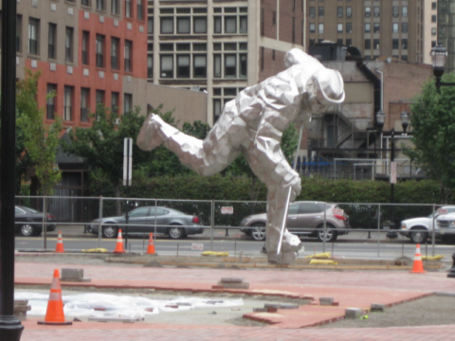 Now, to get into this event, you had to not only be a season ticket holder, but register online to get a ticket for the event.  The ticket, at least in my case, came with my season tickets as well as a letter from Lou about the event. In both cases, they made it very clear that autographs would not be allowed at this event.  So it may seem like over-kill to hand out this card out to every visitor.  However, many people brought bags of shirts, hats, and other merchandise to this event; and I'm pretty confident it wasn't because they like carrying around extra stuff.   Yes, being told through the website and through a letter from Lou - from Lou (or at least his staff) - wasn't enough.  The card was necessary. I didn't see anyone actually bug a player for an autograph, so I hope they got the hint. 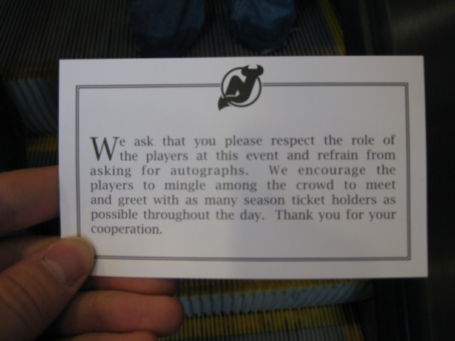 Anyway, the whole lower concourse, the lower bowl, and both Fire & Ice lounges were open. The center  On the concourse there were tables, an area to get your face painted, and attractions for the kids such as some inflatable amusements.  There was, believe it or not, a dunk tank without any water in it.  (Not pictured here is the free food offered as I was too busy eating it, and a magician who had, at least, a "really cool fart trick") 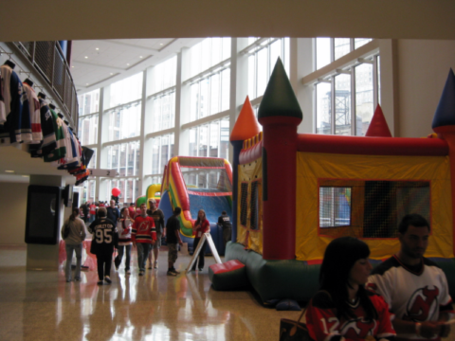 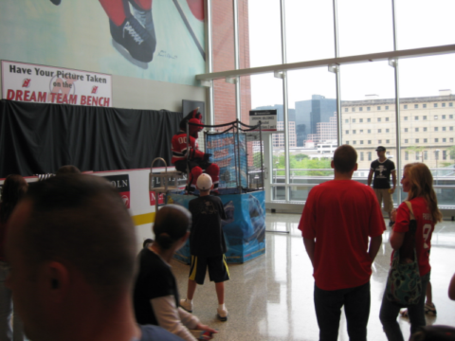 As mentioned, the lower bowl was open.  As the event opened the center scoreboard welcomed all the fans to the game. Later on, they showed a replay of the Devils 7-2 win over Florida on February 28, 2009.  I recapped that game here, but it was fun to see and hear the original PA from that game.  For at least the first goal, they did, in fact, play Rock and Roll Pt. 2. 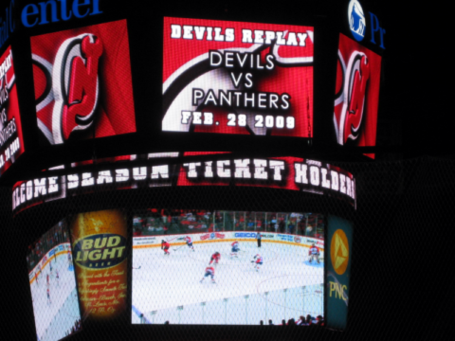 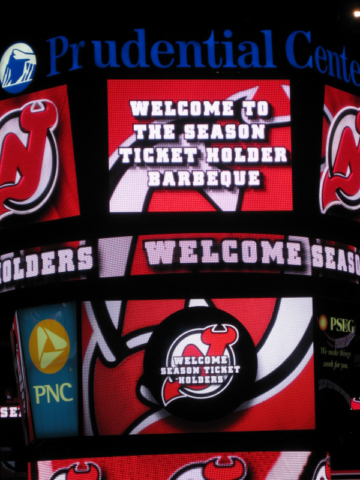 By the way, the rink was missing it's advertising on the boards, but the ice was fully painted.  The first is a shot of center ice from the Fire Lounge platform and the second is actually my view of the rink from my seat: Section 1, Row 16, Seat 5. It is truly worth more than the $49 per game it costs for a season ticket. 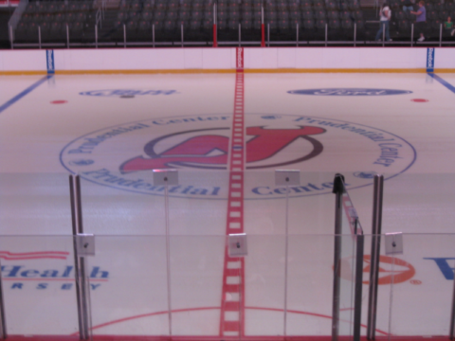 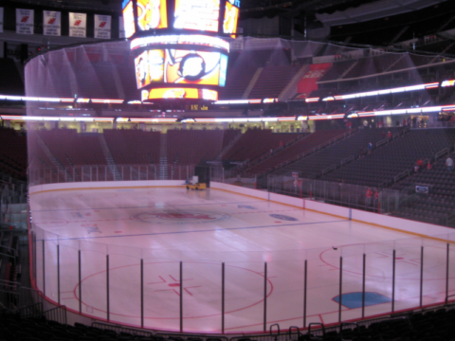 The most obvious set up on the concourse was a "small" stage by the Verizon Center for a tribute band to Bruce Springsteen & the E Street Band.  Ladies and gentlemen, I give you...The B Street Band! 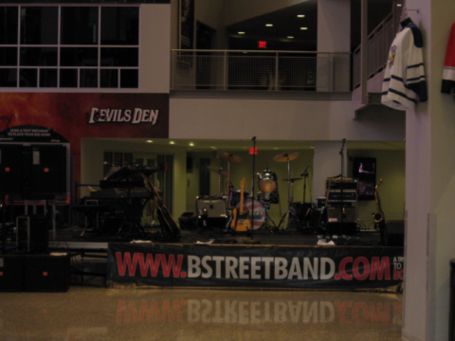 Let's try this again. The B Street Band! 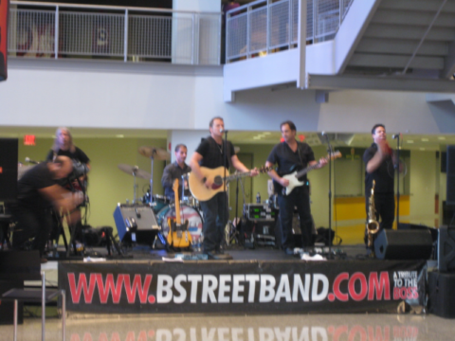 Much better.  Incidentally, the singer eventually became also known as the one to read of seat numbers in a raffle for fabulous prizes.   Unfortunately, I didn't see anyone come to claim them from what I've seen so he got fill in a lot of dead air. In some of these photos you may have noticed that many of the fans were decked out in Devils jerseys or some other kind of Devils merchandise (e.g. hats, t-shirts, homemade purses).  Some are personalized, most are for a player, but some season ticket holders took it to an unexpected level, however. For example, a young girl actually made this and wore it in public: 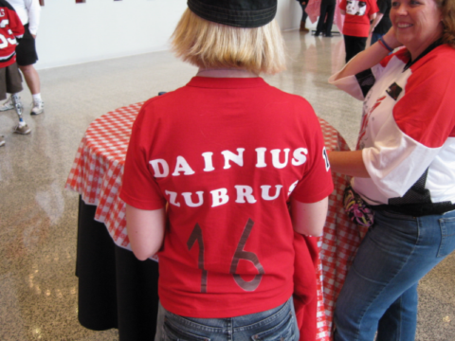 Yes, a homemade Dainius Zubrus t-shirt.   She took a regular Devils shirt and, well, made it one for Zubrus.  My mind was honestly blown considering that opinions regarding Zubrus are, to put it nicely, mixed.  This is like a Giants fan taking a Giants t-shirt and putting, say, Corey Webster on the back in homemade letters.  Your mind begins to race, "OK, but why?"  I asked her and the answer, if I recall correctly was, "Why not?"  There you go.

Incidentally, I ran into (well followed behind) and asked Dainius Zubrus about this and he confirmed that he saw the shirt. And while he appreciated it, he did tell her to make a new one because his number is now #8.

Now, I didn't ask any of the players or the staff any serious questions about what to expect at camp.  Partially because I wanted to enjoy the event, partially because I didn't want to hold the players up as most were constantly greeted and posed with pictures, and partially because anything important questions would come from Gulitti or Chere anyway.  Besides, I don't feel it was an appopriate place for criticism. Am I really going to go up to this man  with a proverbial 12-gauge journalistic shotgun and ask him, "Hey, will you cut down on those hooks next season?" Please.  Living is a good choice. 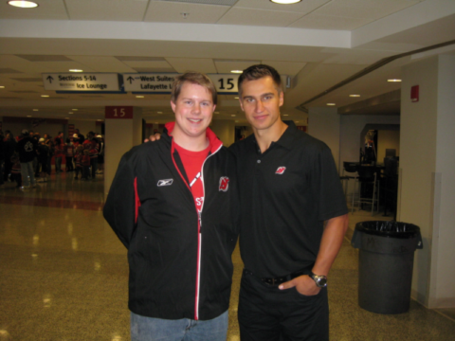 So I generally wished the best luck for all players involved. For example, I told Zubrus (above) that I hope he smashes the critics, though not literally; and I told Jay Pandolfo that I hope he has a better 2009-10 season (he hopes so, too).  I also tried to make some small talk here and there, mostly with Andrew Peters who was so solitary next to Rod Pelley.  So if you're looking for some inside info, here is some (useless) info:

-Johnny Oduya (first photo) thinks Sweden will need to beat Denmark at their next World Cup Qualifier, October 10, to make into the 2010 World Cup.  With a 3 point gap between first place Denmark and second place Sweden, he's right (wins are 3 points in soccer). Won't be easy as the game is in Copenhagen.  He also wanted to know what was that new arena they were building nearby, which is Red Bull Arena. He expressed (polite?) interest, though I warned him the team itself is awful (current record: 4-17-4).

-From left to right (second photo), Rob Davison, Yann Danis, and Cory Murphy, new signings, got a tour of the concourse and were impressed by the Rock.  A lady asked if they all spoke English; and they were polite in saying that they did - though this made them a bit confused about whether they were that foreign.  It was an awkward moment for a bit. All the same, I wished them the best in making it onto the ice and stay healthy (especially in Murphy's case), and they concurred. 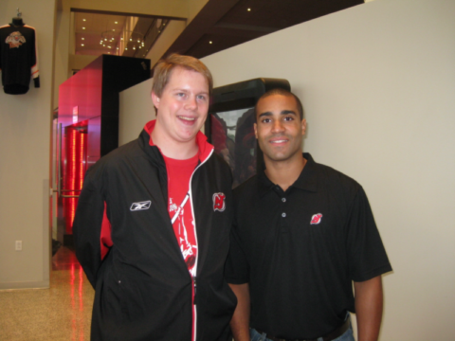 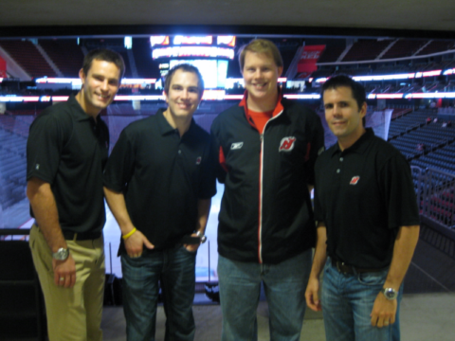 -Paul Martin (first photo) isn't sure what Minnesota will do in either football (they won that day against Air Force) or hockey, but hopes the Gophers do their best.  He also wore some really cool red sneakers that I wish I took a picture of in retrospect.

-Andrew Peters remembers the "it's gotta be the shoes" commercial from the early 90s, as I posited the theory that more people were going up to Rod Pelley because his shoes were shinier.  As an aside, he was also, in my opinion, the beefiest player there.  Unfortunately, since he was just signed to a tryout contract, not many people knew who he was.  Maybe they confused him with security? Anyway, in the second photo, Peters is on the left, Pelley is on the right. 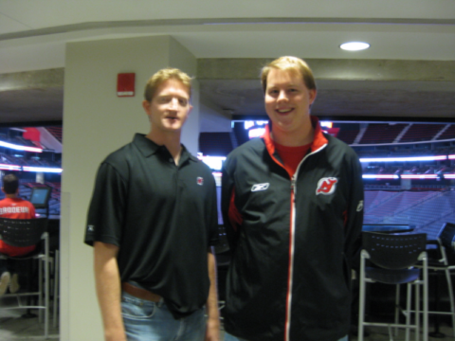 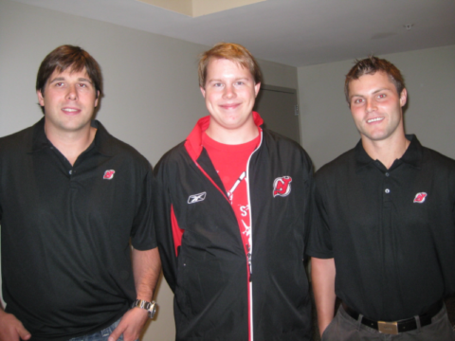 I know, it's so useless.  Admittedly, I didn't get to say "hi" to every player or get their picture; particularly Martin Brodeur and Zach Parise who commanded large, large crowds.  Only long distance ones from a crowd.  And I stupidly passed on a be-spectacled Patrik Elias.  To make up for that, here is Jamie Langenbrunner (left) and David Clarkson (right) play foot hockey with the kids by the Verizon Tower. 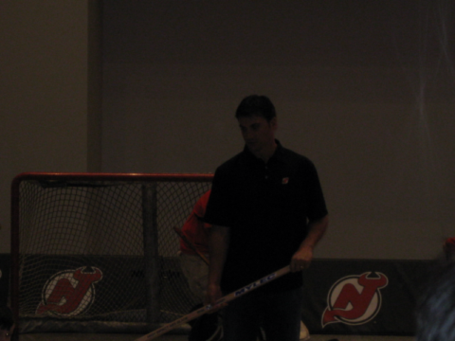 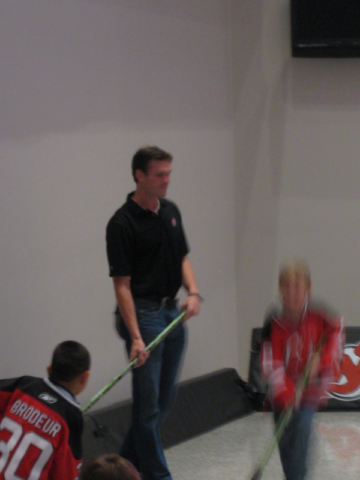 They weren't all that active and kept the play moving, letting the kids dictate the play.

Overall, some of the players seemed a bit distant, probably because they had their physicals this morning and probably because a ton of people want to get at you and get at you know.  I sympathize in that case, and I'm just thankful that the opportunity was there to begin with.   Regardless, it wasn't just players who were at the event.  There were even coaches out and about; though, I only got to see Devils legend and special assistant coach, Scott Stevens.  Here's a close up picture of the two of us. 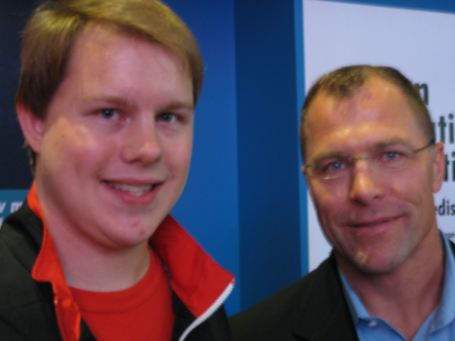 More importantly than Stevens are these two, who were strolling through the concourse.  They need no introduction. 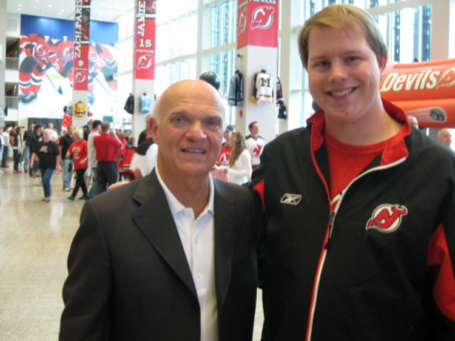 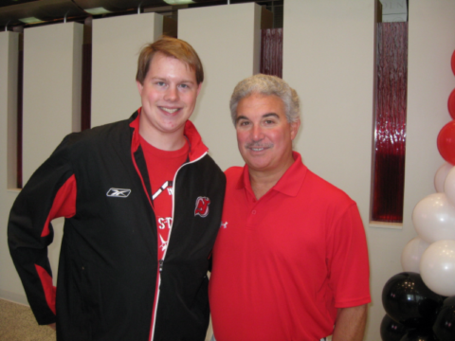 And, yes, both of them know about In Lou We Trust.  Again, I repeat, the organization is aware of this very site.  Regardless, numerous people (including myself) went up to them namely to say "thanks" for what they have done for the franchise.

In any case, I had a great time at the event, ate probably more than I should have, and I hope the Devils will make this sort of an event an annual one for season ticket holders because I'm pretty sure they didn't have one like this last season.   Hope you all enjoyed my pictures and if you were there, let me know what you thought of the event in the comments below.