Two days ago, Jacques Lemaire said the following quote, which was reported by both Tom Gulitti and Rich Chere.  I had plenty to say in response to it, however, I discovered something in that quote that piqued my interest.

**On being excited to be back with the Devils and the start of training camp: "We were talking about this on our way here, Mario [Tremblay] and I. It's a good, a change. It gives you energy. You need a change. It's like players at a certain time. It's fun. We've got a good start. All of our planning at the start and how we want the game to be played, it's good. Scotty's [Stevens?] there. He tells me what the team was doing good, like the power-play breakout as an example. We don't want to change that because it was good last year. So, we'll keep the same thing. The penalty kill, he says we could be a little better, so we're going to work on that, try to find maybe another system you want to put in. It will be a little different, but maybe we'll get more success out of it. Little things like that. Defensemen around the net. I know myself I noticed that some defensemen could be better there, so we'll work on that. Little stuff like that.

Let's take a step back.  Last season, under Brent Sutter, the Devils offense blossomed relative to recent seasons where a player could score about 61 points and be the team's scoring leader and where the power play was lacking in both power and plays.  The Devils scored 238 goals, tied with Anaheim for 14th most goals scored in the league. The Devils power play effectiveness rate was refreshingly among the middle of the league, converting on 18.9% of all power play opportunities.  This was a big improvement over 2007-08 where the Devils scored a mere 198 goals (27th overall) and yielded a power play rate of 15.6% (25th overall).

So, no big deal, right? All Lemaire has to do is maintain the 08-09 levels of production and things should be A-OK for the power play, right?  Perhaps Lemaire and the staff shouldn't mess with how they breakout, tweak the units, and we should be happy with a similar effectiveness rate.

I'm defining a power play's importance relative to the total number of goals scored by the team.  According to the team stats at NHL.com, here's how many power play goals were scored by each team last season in gross and as a percentage of total goals scored. I also included the team's power play rate to illustrate that a high rate may not necessarily lead to power play goals representing a big fraction of all goals. 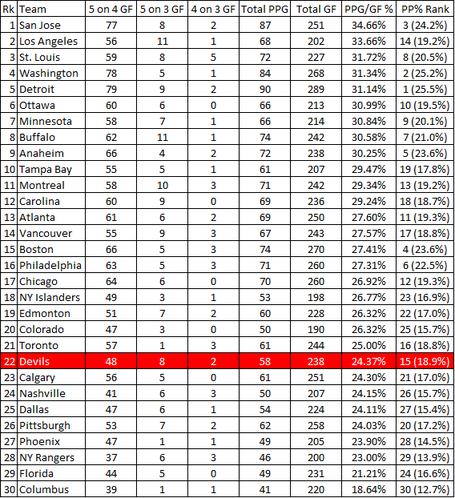 Despite a middle-of-the-road power play effectiveness rate, the Devils' power play goals only represent 24.37% of their offense last season.  That's the 23rd highest percentage in the league!   There are teams with a lower effectiveness rate, but do have more power plays goals scored  and in my opinion, there are at least two ways to look at this.

A) The Devils', like every other team in the league, scores a majority of their goals in even strength situations and did so more than most teams. This is a feature, not a bug; so it is imperative that Lemaire and the staff makes sure this part of the offense does not suffer.  The power play isn't so important, but so what if the total offense is bullish?

B) The Devils have a lot of opportunity here to make their power play not only more effective, but represent a bigger part of their total offense.  They should be shooting for 29-30% instead of settling for 24-25%. While it may not be a vital area of improvement, an improved power play at a minimum  would provide an extra dimension to the Devils' attack and perhaps provide more goals overall.

If you're a proponent of A, you're probably pointing out that a team like Boston is dead in the middle of the league under this stat despite having the leagues' fourth most effective power play as well as the second most goals scored last season.  Proof that a strong power play doesn't need to be important, especially if you're scoring mounds of goals outside of the man advantage.  If you're a proponent of B, you're highlighting that Los Angeles had very poor overall production last season with 198 goals, but their power play was fairly effective and even more important than one may think from the poor offense. Opposing teams had to take the Kings' power play very seriously or risk getting burned and losing the game as a result of it.

Honestly, I think both views are right in their own way, but it's an interesting point to discuss.

Bringing it back to New Jersey, should the pundits be correct about Jacques Lemaire instituting a more defensive style in New Jersey, then I think it makes the power play a priority.  It is possible that this more defensive style of hockey, as well as certain players coming off career years not being able to reach those highs, injuries, etc.,  could all result in fewer goals scored in even strength situations.   Therefore, in order to keep goal production up as well as to keep opponents honest, then the Devils need to be more productive in situations where offense is primarily the focus - the power play.

How can they accomplish that?  Well, converting more chances helps in general.  In 4-on-3 and 5-on-3 situations, the Devils have been relatively well in goals scored, ranking tied for 7th and 9th, respectively.  However, in terms of 5-on-4 situations the Devils only ranked 23rd overall with only 48 goals scored.   Given that's the most common type of power play, that would be the best situation to focus on improvement.

A more diverse set of goal scorers on the power play would also be a big help.  The Devils' first unit last season was usually ZZ Pops with Patrik Elias and Paul Martin as the lone defenseman.  The second unit was more in flux, but generally featuring Brian Rolston, Brian Gionta, Dainius Zubrus, a defenseman (Andy Greene or Johnny Oduya), and a fifth option (e.g.  sometimes a second defenseman, Brendan Shanahan when he joined up during the season).   The first unit was not only more talented and had more chemistry, but it had two players scored most of the Devils' 58 power play goals last season - Zach Parise and Patrik Elias. 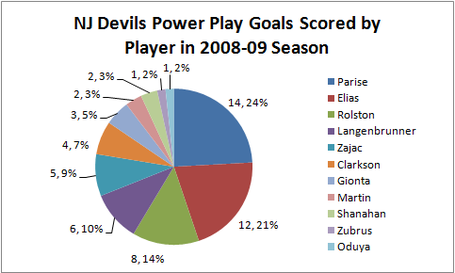 Parise and Elias combined represented 45% of all the power play production last season.  They will likely lead the way again in 2009-10, but they really could use some help.  If only so opposition penalty kills don't focus on just one unit or these two players (assuming they can cover both at the same time).   A few names here stick out as possible options.  Last season, Brian Rolston showed a little more of his potential value despite being on the secondary power play unit.  If he has a better season - and I'm expecting him to - then he really could be that player to really contribute on the power play such that it isn't just Parise & Elias providing a plurality of the production.  Jamie Langenbrunner and Travis Zajac, who helped set up both Parise and Elias a lot on that first unit, would do well to contribute more goals.  Even if they are on the same unit, the opposition PK units will have a harder time trying to account for four offensive weapons instead of just two.

Still, it's going to be a challenge as who fills out the second unit.  Do you move Elias to a second unit to improve it?  Do you hope Dainius Zubrus and/or David Clarkson improve their power play efforts?  How much does one rely on Brendan Shanahan at this point of his career?  These are all issues, I think, Lemaire and the staff need to answer.

The biggest one could be who on defense should be involved on the power play?  Notice that only two defensemen scored power play goals last season: Paul Martin and Johnny Oduya.  And combined, they scored 3 goals  Which is, incidentally, the same amount of power play goals by Brian Gionta last season (and Gionta only added 8 assists compared to Martin's 18; again, Montreal fans, savor that $5 million/year cap hit!).  The Devils defensemen have contributed very little on the power play (Mike Mottau was the only other defenseman to contribute a point on the power play, an assist) as none of the top 6 are true offensive defensemen.  Don't think Cory Murphy - 4 PPG, 6 PPA in 25 games - wasn't signed with this situation in mind.

Getting back to the initial question, yes, I think the Devils do need to get better on the power play if the plan is to play with less aggression in 5-on-5 action and if we are to expect overall production to go down.   Even if he only tweaks Brent Sutter's system from last season, the Devils can only benefit from more production on 5-on-4 power plays and make the power play contribute more to the total offense.  2008-09 was definitely an improvement over 2007-08; but there's still room for growth in my opinion.

Lemaire may be right that the power play breakouts work fine, but given how the Devils truly looked on the power play last season I hope he is informed that the offensive side of special teams could use some improvement as well.

Now it's time to have your say in the comments.  Do you think the power play needs to be a more important part of the Devils offense, or are you more concerned with the offense overall?  How would you improve the power play, if you think it needs improving?  As always, thanks for reading.