Share All sharing options for: A Closer Look at Dainius Zubrus' Penalties from the 08-09 Season

After digging up the information for David Clarkson's penalties, I discovered something that I didn't realize.  Yes, Clarkson led the team in penalty minutes and finished second behind the now retired Bobby Holik in minor penalties with 26.   What I learned that was that Clarkson wasn't alone with that mark - Dainius Zubrus had 26 minors as well last season!   This is even worse than Bryce Salvador and Colin White last season!

Questions raced through my mind. How much has Zubrus cost the team in terms of man advantages?  Was there any specific penalty he kept committing?  When did these penalties happen?  Zubrus isn't a fighter, but he does do a lot of battling along the boards and down low on offense; could the penalties reflect that? Given that Zubrus is on the top two lines, this is certainly worth a closer look.

Dainius Zubrus took penalties in 20 games last season; largely within the first two periods. Here's how his 28 penalties break down by time in the game: 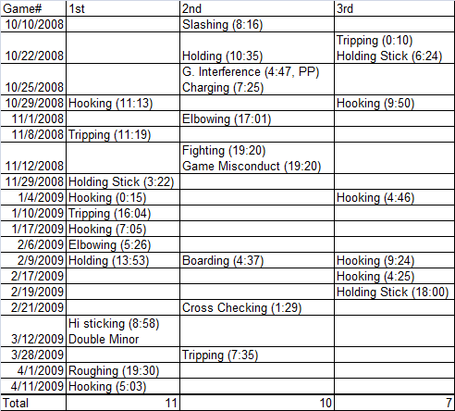 Among his 28 penalties, 4 were matched by an infraction on the other team at the same time - the holding call on 10/22; the elbowing call on 11/1; the boarding call on 2/9; and the roughing call on 4/1. Zubrus also had one fight as well as being one of two Devils to get a game misconduct penalty last season (the other is the now-Pittsburgh Penguin Mike Rupp).

As the chart shows, 21 of his 28 penalties came within the first two periods.  Interestingly, at the start of the season, Zubrus took most calls in the second period; and then from the end of November to the beginning of February, the calls mostly came in the first period.  Even more interestingly is that Zubrus took absolutely no penalties in December. Well done, Dainius.  Too bad he made up for that with 8 calls in February 2009, which is the ties October for the most he took in a month.  Yes, Zubrus took 57.14% of his penalties in just those two months alone.

As far as to why he took so many calls in the first two periods, I have only a guess.  Generally, the ref for a given game can vary between stringent and lax throughout the course of the game.  From what I've seen, it's not unheard of for the referee to "establish the tone" early in the game by being stricter in the first two periods than he would be in the third period.   It's possible that Zubrus was playing his normal game and he learned the hard way what the ref would allow that night.   Then again, that doesn't really excuse Zubrus or any other player as the ref isn't making up his own rules - just deciding the seriousness of what he'll call.

Moreover, especially in Zubrus' case, the types of penalties he took aren't really defined with shades of gray.  Especially in "the new NHL," the refs have been consistently tagging players with minors for little hooks and slashes to an attacker's hands and shins.

That's right, 8 of Zubrus' 28 penalties - 28.57%, to be precise - were hooking calls. That's awful.  I can't say for certain where on the ice these calls have taken place.  However, it's clear that Zubrus was caught trying to gain illegal advantage on a player 8 times.  Moreover, on 3 of these 8 hooking calls, the other team went on the power play and scored.  Again, that could be coincidence.  Yet, the larger issue remains: Zubrus took way too many hooking calls and he needs to watch where he puts that stick.  There's something to be said about being physical and at 6'5", 230 lbs, one would think he wouldn't need his stick for that.  Especially considering that the NHL has been consistently and constantly calling those little hooks since 2005-06!  Surely Zubrus (among other players) would have figured this out by now, but last season is evidence against that unfortunately.

Zubrus could also wisen up in other areas of using his stick.  His next two most common penalties are tripping and holding the stick.  I know things can get rough along the boards, but holding the stick, Zubrus? Really?  That's just not smart - and you got caught three times last season for it.  That has to end.  So do the trips. The ref didn't call any one for diving after those infractions, so I'm led to believe they were legitimate.  Just like with the holding the stick calls, I can't help but think it's a stupid penalty to take.  Just avoid putting your stick on or between someone's leg!

If Zubrus can reduce or eliminate those three penalties, that would be huge as those three alone represent 53.57% (15) of all his penalties last season.  The rest are a hodge-podge of calls that make Zubrus' penalties more varied than Clarkson's. In general, I think if Zubrus plays with some more intelligence and perhaps a little restraint early on in the game, then it may go a long way at keeping Zubrus out of the box and remain on the ice to do his job.   Above all else, Zubrus has to watch his stick work - both his own and his opponent's! - should he want to make a serious effort of avoiding the penalty box.