Share All sharing options for: A Closer Look at David Clarkson's Penalties from the 08-09 Season

David Clarkson led the New Jersey Devils in penalty minutes with 164 last season.   In fact, he finished last season with the 10th most penalties in minutes in the entire league.

In my expectations post, I argued that Clarkson will certainly get more ice time as he spends less time in the penalty box overall.  Yes, he could very well be able to put up 20 goals and more than 40 points next season, but no one scores while feeling shame in the sin bin.  Similar to what I did with Colin White and Bryce Salvador in the past few days, here's how Clarkson's penalties broke down in terms of timing and in type.

Before I hit you with a huge chart, let me point out that Clarkson took 20 fighting majors last season, a total of 100 penalty minutes.  By simpling fighting less - even only half - that's a lot more time Clarkson can be available for regular shifts.  Regardless, I have included them all in this chart: 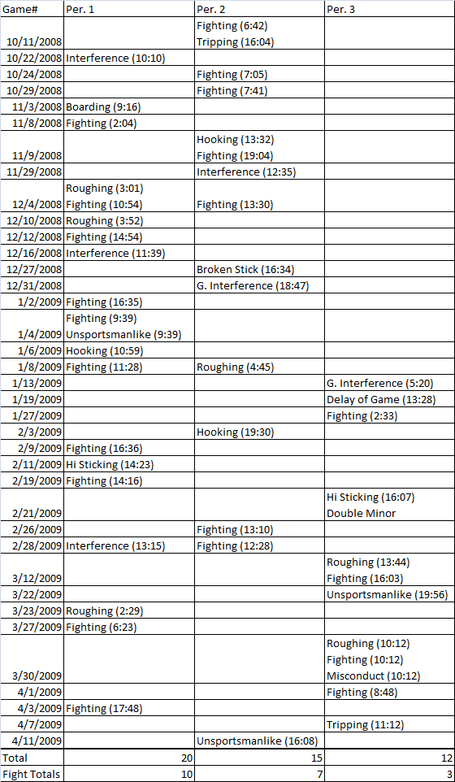 Wow.  Clarkson amazingly took no penalties outside of even strength situations or regulation.  He's had 5 matching minors: three for roughing (12/4, 12/10, 3/23) and two for unsportsmanlike conduct (3/22, 4/11).  Plus, there's that's misconduct penalty he got on 3/30.  Out of the 48 calls Clarkson got hit for, only 22 led to power plays. And of those 22 power plays, the other team only scored 4 times - twice on that hi-sticking double minor on 2/21.  So it's not as bad as, say, Bryce Salvador; but it's not good to see a gritty forward hand the opposition this many opportunities while taking himself out of the game for 100 minutes.

In terms of time, Clarkson can make improvements at any period and it would be a big help.  In terms of fighting, the first period is where most of those 5 minute majors come from.  Perhaps gloves were dropped early to "set a tone" for the game?  The 7 fighting majors in the second period are evidence against that theory, though.  At least he didn't taking 5 minute majors in the third period.

Similar to Colin White, Clarkson can benefit himself and the team by reducing his penalties in all three periods.

With 20 fighting majors, it's by and far the most common penalty Clarkson took last season.  Here's a chart detailing all the kinds of penalties took.

Now, as mentioned earlier, 3 of those 6 roughing penalties were matched by the other team as well as 2 of those 3 unsportsmanlike conduct calls.  Therefore, they didn't lead to the Devils being down a man in those cases.  Therefore, Clarkson would do well to watch where he places that stick and who he hits - as 8 of his 26 minors are in hooking and interference calls alone.  10 if you want to include the two goaltender interference penalties.  In my opinion, and it's becoming a constant refrain, these are the types of penalties Clarkson should work at reducing the most.

Truth be told, I don't find this distribution too surprising - for someone who goes out to hit as much as he does, roughing and interference calls (and perhaps fighting?) may not be seen as unexpected to a point.  That said, hooking, hi-sticking, and tripping aren't smart ones to take.  Incidentally, I think it would serve him well to cut down on these little needless ones like goaltender interference, delay of game (clearing the puck over the glass), and playing with a broken stick.  OK, they aren't much, but they are also more easily avoidable in my opinion.

Of course, if Clarkson fights less, he likely won't be in the position at taking matching roughing calls (e.g. gloved punches after a whistle, etc.) or unsportsmanlike calls.  Sometimes these are called along with the fighting majors as well and it keeps Clarkson down while occassionally giving the Devils a shorthanded situation. With David Clarkson, I think it's clear that there is a lot of opportunity for him to cut down on his penalties just based on minutes alone.  Overall, he takes plenty of infractions across all three periods and once again, if he just fights less and watches his stickwork, then Clarkson will be more available to throw more hits, bring the puck up ice, and perhaps throw out some more Clarkarounds.

Now it's time to have your say.  What do you make of Clarkson's penalties from last season? Do you also agree that he should make the effort to fight less, or can he cut down on the penalty minutes outside of that?