Share All sharing options for: A Closer Look at Bryce Salvador's Penalties from the 08-09 Season

Friday night, I posted an analysis of Colin White's penalties from last season.  That post was generated by a commenter noted that it's important to know when and what penalties were taken - and I agree.  In finding so, one can conclude that White took calls evenly across all three periods, his most common penalty was roughing (and most of those were minors matched by the other team), and he really could stand to cut down on his delay of game calls among all else.

Upon completion of that analysis, I felt it would be fair to do this analysis for Bryce Salvador.  In my post explaining what I expect from Salvador, I stated that I wanted him to cut down on his minor penalties.  Salvador took 24 minors last season, one more than Colin White; but his minutes were much higher due to 6 fighting majors.  On the surface, it doesn't seem so bad - only one more minor than White, after all.  Yet, I found that Salvador's infractions were much more costly.

Here's a big chart detailing each and every one of Salvador's penalties from last season: what type, what period they took place, and when in that period they happened: 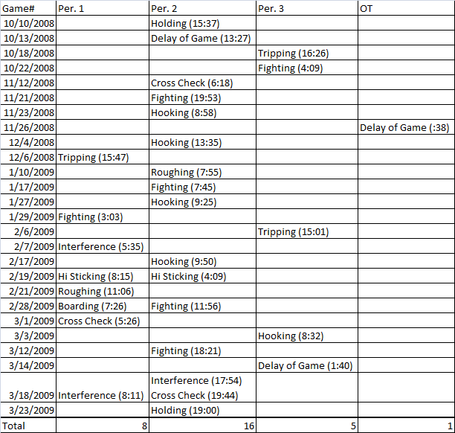 At least Salvador isn't taking too many in the late stages of the game.  He only took 4 minors in the third period last season and none of them took place within the last 2 minutes of the game.  That's (somewhat) of a positive. Salvador also took a really dumb delay of game call in overtime, though it didn't cost the team the game.

As a bit of an aside, I'd like to highlight 2/19/2009 and 3/18/2009 on this chart.  Notice that not only did Salvador took more than one minor in both games - but he took consecutive calls for the same type of infraction.  3/19 was particularly awful for Salvador as the other team scored on both of those interference calls and he took a cross checking call right after the second one.

Similar to White, the vast majority of Salvador's penalties were called in even strength situations.  Salvador only took one penalty during a penalty kill, a cross checking call on 11/12/2008 (in the second period).   Unlike White, Salvador only took one matching minor - a roughing call on 2/21/2009.  In contrast, White took 4 of those.  Salvador was better than White at taking roughing calls, and he was able to turn more of those "matching roughing calls" into actual fights.  From what I've seen, referees tend to hand out matching roughing calls should they feel there's too much rough stuff outside of an actual fight.

Also unlike White and very damaging to the team, the opposition has scored on eight of Salvador's penalties.  The first was the cross checking call on 11/12, which led to a 2 man disadvantage where the opposition cashed in.  I won't go into details as to who scored them; but if the opposition is taking full advantage of a third of all your minor penalties, you know that discipline is an issue.   Interestingly and coincidentally, the most common penalty that Salvador took that led to power play goals against were hooking penalties.  Four, or half of all the penalties-that-led-to-goals-against, of them to be precise.

That's a real problem as Salvador took 5 hooking calls last season.  Again, it could be just coincidence that 80% of the time Salvador got caught hooking a player, the other team went out there and scored.   I could see it being coincidence.  Other factors could be at play.  Regardless, he needs to keep his stick down.  NHL refs are constantly and consistently calling those little slashes and hooks to the hands and legs of players since the lockout.  Salvador can help himself and his team out by adapting to that reality!  You want a type of penalty that Salvador should work on reducing, it's hooking - plain and simple.

Beyond the fights and the hooks, the types of penalties are spread out.  Delay of game calls are dumb by definition.  Interference can come from mis-timing a hit or losing focus on when to hit.  Cross checking and tripping can be avoided with better discipline with the stick.  I'd like to see Salvador make efforts to choose a few of these (or all of them, that would be good) and reduce those kinds of infractions as well.

Overall, the point of this analysis is to highlight the when a player takes a penalty and what kind of penalty it is in an attempt to figure out what should be done.  Taking a minor penalty doesn't just hurt the team by forcing them to weather the storm of an opposition's power play.   It also keeps that player out of action, preventing him to contribute to the team as well as giving his team a new problem to deal with.  Given that Bryce Salvador is a defensive defenseman, instead of feeling shame for 2 minutes 24 times (which is what he did last season), he could have been out there making plays, getting stops, throwing hits, and dulling opposition attacks.

Do I expect or demand absolutely no penalties from Salvador (or any other Devils for that matter)? No, that's unrealistic.  Mistakes will be made by the player and/or the ref. There are even rare times where a player has to take a penalty to prevent something worse from happening.  Yet, I think improvement is certainly a realistic goal. Therefore, I'd like to see fewer hooking calls, fewer calls in general, and especially fewer calls in the second period.  By reducing the amount of minors he takes, Salvador will have more time to contribute - which is the goal, in my opinion.