Share All sharing options for: A Closer Look at Colin White's Penalties from the 08-09 Season

In the expectations post for Colin White, I noted that White has considerably improved when it comes to taking penalties.  Early in his career, White has developed a deserved reputation for taking a lot of penalties.  While he only finished with 46 penalty minutes last season and 26 before that, this reputation still lingers.  After posting a comment detailing how White's penalties have dropped from season to season, ILWT reader HELLAWAITS provided an interesting point:

My point on the penalties with him was when and what penalties he takes opposed to how many. It seems all too often I am watching a close game in the 3rd period saying to myself "ok, now no one take a penalty and everything should be fine." To which my hopes and prayers are often answered with a ref’s arm in the air and Colin White skating to the box with the "who me?/aww shucks" look on his face. I realize he is on the ice at these critical times for a reason and such times often require dire actions on a defenseman’s part. Although my idea of dire actions do not include slashing someone away from the play/tripping a man on his way back to the bench etc etc etc…

He's absolutely right about the importance of when and what penalty was committed by a player.  If a player who takes even only 10 penalty minutes but they all come from boneheaded infractions at crucial parts of a game, then it's just as big as a problem as a player who takes well over 100 PIM in a season.    Yes, Colin White has cut down on the number of penalties; but when is he taking calls? What are the calls he's taking?   I think this is interesting enough to warrant a larger look at how Colin White took penalties last season.

Looking back at last season is easy now as his game log is still readily available through his player page at NHL.com.  So I'm keeping it simple by focusing only on 2008-09 (though I think I can access other seasons, if you'd like). In 2008-09, Colin White took 23 minor penalties for a total of 46 penalty minutes.  After going through the boxscores at each game, here's how it breaks down: 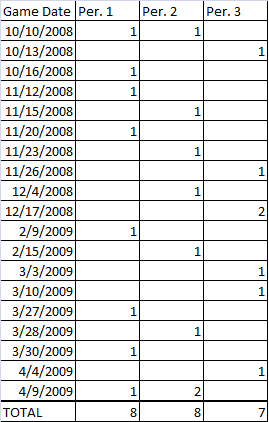 Much to my surprise, Colin White didn't take a single penalty from mid-December to the second week in February.  By my count, that's 18 straight games and that's really something for White! Also to my surprise, White got caught fairly evenly across all periods.  There were only 3 games where White took more than one penalty in a game: the first game of the season (10/10), 12/17 against Buffalo, and the last game of the season (4/9).  For all other games, White did well to limit his penalties to only one  or less all game.  In terms of the situations when he's taking these, the majority of these calls were made in even strength situations.  Some were matching minors - mostly roughing calls; and based on the boxscores I could find only one call, his third period high-sticking call on 10/13 against Our Hated Rivals - that was during a penalty killing situation.

As far as to whether these calls have put the Devils down, I can say that White's penalties have only led to 2 power play goals as far as I can tell.  The first was a very late, third period consolation goal from Calgary's Curtis Glencross on 3/10 after an ill-advised clearance of the puck over the glass by White.   The second was Chicago's first goal in their 3-2 win against the Devils on 3/27, scored by Kris Versteeg in the first period.   Of course, this doesn't measure whether the team got shelled or dominated after White took these calls.  But I think it's fair to say that White's infractions didn't directly cost any games for the Devils.

One last point: 3 of those 7 third period penalties came within the last two minutes of the period: 12/17 (interference, 19:37), 3/10 (delay of game, 18:07), and 4/4 (delay of game, 19:25).  If White absolutely has to focus on cutting down on calls based on timing alone, I think he should start with the final 2 minutes of the game.  Yes, it was only 3 minors last season. Yes, they only led to one goal that had no effect on the Devils winning that game.  But that's the time of the game where it is imperative to avoid giving the opposition any kind of hope of getting points (or killing your own team's hope at points).

This leads me to what kind of penalties White took.  By definition, a penalty is usually avoidable and not a smart decision.  Especially for something like hooking (the NHL has been calling hits to the hand for, what, 4 seasons now?) or delay of game calls for clearing the puck over the glass.  That said, I don't know whether all of these were dumb, but it should give a good idea on what White needs to improve on to cut down on those costly PIMs.

Second, your eyes are not deceiving you, Colin White did take 3 delay of game calls for clearing the puck over the glass in his zone.  Of all the penalties to cut out, this should be a priority.  I understand that in a pressure situation, the idea is to just shovel the puck out as hard as you can.  Still, one would have to think that clearing the puck over the glass in your zone is still easily avoidable with a little discretion on the clearance.    Keep in mind that two of these came near the end of the game, all the more reason to cut them out.

Third, like with most infractions, a little more discretion with the stick and physical play can probably cut a lot of these for next season.  Just by keeping the stick on the ice more often, White can reduce if not eliminate the hooking, tripping, and hi-sticking calls he took.  In conjunction of being more aware of whether his target for a hit has a puck, White has room to further reduce his penalties - which is good, as he's more valuable on the ice than in the box.  Of course, this is all easier said than done.

Nevertheless, let the stats show that White doesn't tend to take more penalties in one period over an other.  Moreover, his types of penalties aren't particularly egregious in any one type - though I feel particularly annoyed  that he had 3 delay of game penalties for clearing the puck over the glass.

This has been an interesting look at penalties, and I thank HELLAWAITS for raising the issue.  I hope this has shined some further light on how White has performed last season.  In addition, look for this kind of analysis for Bryce Salvador and David Clarkson, two Devils who I feel should also make an effort to reduce their penalty minutes, in coming days.  Have your say in the comments about the distribution of Colin White's penalties last season. Did I make a mistake (and if so, do let me know so I can correct it!)? Were you as surprised as I was when I discovered it?  Did it leave you with more questions than answers?  Do you have any other questions about how a certain Devil performed?