Share All sharing options for: What Should Devils Fans Expect: Patrik Elias

Up until Zach Parise, I'd go as far to say that Patrik Elias was the best forward in franchise history.  Who else was as skilled and productive as Elias?  He was the star of the A-Line, putting up 96 points in 2000-01.  Of the A-Line, Elias was the only one retained as a Devil, leading the team in scoring even with downturns in his production.  Throughout this decade, up until the 2007-08 season, Elias led the Devils in scoring except in 2005-06.  That year was cut short due to a battle with Hepatitis A, but even so Elias made a come back in the second half of the season like none I've ever seen before.  In 38 games, Elias wasn't on fire, he was an inferno - lighting up opponents with 16 goals and 29 assists and further propelling the combination of Scott Gomez and Brian Gionta.  Since then, Elias continues to remain a feature of the Devils' offense.

On March 17, 2009, it wasn't just Brodeur who broke a record - Elias became the franchise scoring leader with his 702nd point (now at 706), joining his other franchise-setting records as the leader in goals (295 and counting), assists (411 and counting), game winning goals (60), playoff scoring (40 goals, 72 assists, 113 points in 133 games), and overtime winning goals (15 - and he's tied with Jaromir Jagr and Mats Sundin for the league record).  Needless to say, Elias has made his mark as a New Jersey Devil legend.

But again, the best left winger on the team is currently Zach Parise, whom I expect to lead the Devils' offense in 2009-10.  This is not to say that Patrik Elias is to be written off. In fact, Elias had a great 2008-09, finishing 20th in the league in scoring and a point-per-game rate. Based on how his career has progressed, there's reason to believe that Elias will still be a key contributor to the Devils' offensive success.


Here is a table detailing Elias' career, right from when he got his first taste of the league over a decade ago: 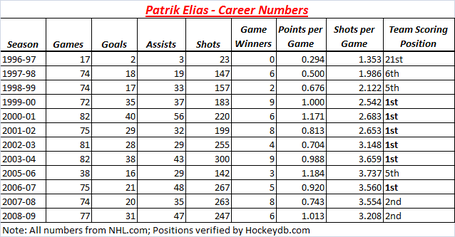 There's quite a bit to notice here.  First, the goal scoring.   If you want direct proof of how well Elias did last year, then 31 goals really says it all.  It's the first time Elias broke 30 goals since 2003-04 and only for the fourth time in his career.  Elias has consistently got shots on net on a given night over the past few seasons; but he was certainly more accurate (and fortunate) last season than usual. Even so, Elias has averaged at least 3 shots per game since 2002-03 - proof of Elias' making an effort every night to score. 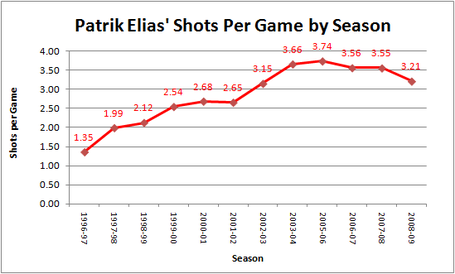 Second, the playmaking.  Even with the illness-shortened 2005-06, Elias has been exceptional at setting up players for goals.  He tends to be able to find an open player to fool the defense (and sometimes that player); making passes through spaces so tight it could thread needles.  As a result, it's no wonder that he tends to get most of his points that way.  I wouldn't go so far as to say he's only a playmaker, as he has goal scoring skills as well; but it's his most consistently productive area of his game. You'd have to go back to 2002-03 for a season where Elias did not have at least 10 more assists than goals.

Third, and most importantly, is the trends in scoring.  This graph really illustrates the points-per-game rate in each of the seasons of Elias' career: 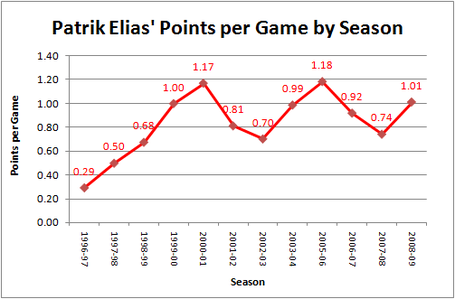 That said, I do not expect Elias to actually peak his point per game rate as high as he did in 2000-01 or 2005-06 next season.  I mean, we would be talking at least 90 points and I'm not confident Parise will get that many.  As stated earlier, Elias is not the top left winger on this team anymore - Parise is.  Parise is on the first line, he'll get more ice time in even strength situations, and he already has two linemates that we all know work very, very well with each other. Therefore, Parise will have the prime scoring situations that Elias had in those other two seasons.  In contrast, Elias will be on the second line; and it's not certain who his linemates will be, though, I would have to think it's Brian Rolston and Dainius Zubrus - a combination that was only tried 46 times last season according to Dobber Hockey's line combination tool.   Elias has played with each before, but as a full line, it's still unknown as to how well it will work on the ice.

But I definitely do think Elias can do very well for himself next season.  There's still factors in Elias' favor:

Ultimately, I expect Elias to still play like he has been for his entire career.  As far as what type of production to expect, I feel that if Elias can put up about 70 points next season, that would be more than fine.  65 points wouldn't be too bad, but I expect Elias to keep up his point per game rate close to 1 based on what he can do and the other factors in play. Could he repeat his 2008-09 performance? Sure! My expectations are only a little less than that.

Now it's time to have your say.  Perhaps you feel Elias won't be as good and therefore are expecting less. Perhaps you think Elias is as good as he always was and will continue his scoring trend to put up a ton of points. Perhaps you are in the middle like I am.  Either way, let's discuss the issue in the comments.