Share All sharing options for: What Should Devils Fans Expect: Martin Brodeur

Let me say this right now.

In sport, as a player gets older, their body and skills suffer for a number of reasons.  Past injuries taking their toll, general wear and tear just by game-to-game activity, the mind working faster than the hands, the game changes whereas the player's style doesn't necessarily adapt, etc.  When a player is hitting their mid-30s, we say that they are on the decline in their career because they are literally past their prime - which is in the late 20s, early 30s for most players.  The area where they are physically sound and talented while benefiting from the experience and knowing how to use their skills the best.   Some players play on, however we expect them to take on a more limited role, like the 40-year old Brendan Shanahan.

As a result, some Devils fans may feel that Martin Brodeur shouldn't be allowed to play more than 60-65 games.  He'll get tired and he's old.  The implication - either intended or not - is that Brodeur isn't who he once was.  Even after witnessing Brodeur coming back from first significant injury in his entire career last season to put up impressive numbers playing like, well, Brodeur normally did.

What I expect from Brodeur is more of the same, and I'm confident we'll get just that based on what he has done in recent seasons.  In showcasing that, I hope to make the point that for Brodeur, age really is just a number.

Let's consider the last 8 seasons.  A time where Brodeur excelled both before the lockout and after. A period where Brodeur has had Jacques Caron as goaltender coach and 6 different head coaches.  A length where the Devils defense once featured Scott Stevens, Scott Niedermeyer, and Brian Rafalski in the top 4 at the same time to a point where the Devils do not have any big names on the blueline.   What I did was compare Brodeur's numbers to the median league numbers among goalies who played enough games to get onto the GAA, save percentage, and shutout leaders list.     If anyone has averages from each season, then I'll gladly revisit this comparison.  For now, this will do.

First, here's a chart of all the raw numbers.

There's a lot to be impressed here.  Half of these seasons, Brodeur walked away with the Vezina Trophy, awarded to the best goaltender of the season.   Notice that Brodeur won at least 55% of the games he played in for 6 out of these 8 seasons.  Notice that Brodeur's highest GAA is 2.57, which came in the season right after the lockout.  Notice how his worst seasons in save percentage come in the first two seasons here, showing that Brodeur has stepped up in this regard.

Maybe you haven't noticed all that. That's OK, here's three graphs comparing Brodeur to the median while showcasing how his numbers changed over these 8 seasons. 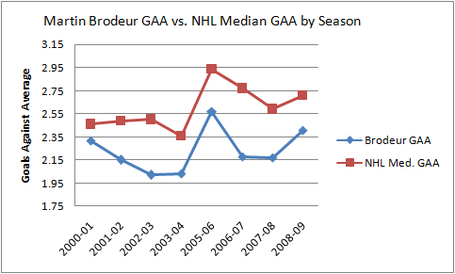 Notice that Brodeur's not only beating the median but look at that trend. Only twice has his GAA gone above 2.35 in these 8 seasons.  Impressive. 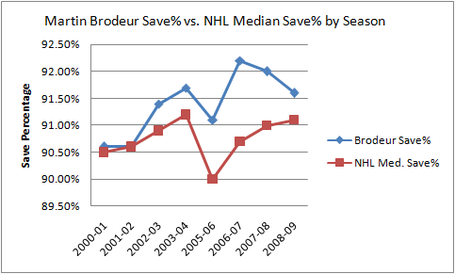 Here, we see that Brodeur was around the median at the beginning of this time period. Yet, he improved from then on to stay significantly away from the median in the next 6 seasons.  He has trended down in the last 3 seasons, but it is still above a very respectable 91.5%. 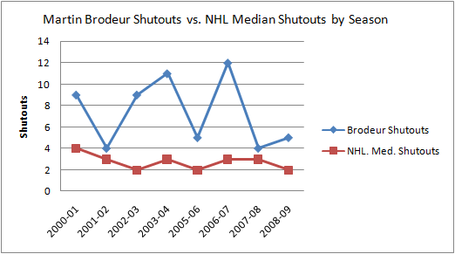 Shutouts are always tricky because a bad bounce or a bad read could end a shutout effort in the blink of an eye. Still, Brodeur has either good shutout totals or extremely good shutout totals in a season.  Always above the median and it still boggles my mind that he picked up 5 in just 31 games last season.

In goals against average, save percentage, and in shutouts over each season, Brodeur has done better than the league median. The only exception is in save percentage, where Brodeur matched it in 2002-03.  Still, this helps prove that Brodeur has been a top goaltender.   EVEN AS HE GETS OLDER.

That is the big point I want to make with these graphs and the chart.  Martin Brodeur doesn't just have great numbers, he continues to put up excellent numbers and finish among top goaltenders in the league despite getting older.  Brodeur didn't slow down at 34, he set a career high in shutouts while posting his best save percentage since 1996-97.  He won his third Vezina in his career - and in this time span - for his results.  Next season, a 35-year old Brodeur still was a puck-stopping machine with a superb sub-2.20 GAA and 92 save percentage, earning him a second consecutive Vezina.  And last season, Brodeur had a great October, got injured, and came back in late February without missing a beat.  Had he been able to play 65-70 games, who knows, maybe he would have challenged for a third straight Vezina.

Why is Brodeur able to do all this, when most are near the end or already finished their career as a player?  The same reason why he's got 4 Vezinas, 3 Stanley Cups, the record for career wins, and closing in on career shutouts.  Martin Brodeur is a legend.  And should we really hold him to the same standards and expectations as most other  players? I don't think so. Just look at the last 8 seasons, from age 28 to 36, for proof.  You can't tell me he's been getting worse with age.  Likewise, you can't even say Brodeur has to worry about past injuries to hold him back. He's had exactly one significant injury in his career which was last season, and he didn't struggle at all when he returned to the ice - so there's no reason to believe it will hurt him this season.

I see no reason to believe Martin Brodeur won't be one of the best goaltenders in the league in 2009-10.  If Brodeur and the coaching staff feel he can/wants to play 70 games based on workload and such, then by all means, Brodeur should play 70 games. Again, I see no reason to believe that Brodeur will somehow get that much worse at age 37 than he was at 35 or 36.  I won't give a stat line prediction, but I do expect Brodeur to set the NHL record for career season shutouts in 2009-10.  I also expect him to continue playing at a high level, finishing among NHL leaders in goals against average, save percentage, and - of course - wins.   Do I think he can accomplish all that? Of course!

Now it's time to have your say.  Do you still think that Brodeur should be held back, and if so, why?  Do you have league averages for goals against average, save percentage, and shutouts; and if so, can you let me know? I'll happily revisit this should the averages tell a different story?  Perhaps you would like to suggest an actual statline for Brodeur as an expectation?  Or do you have some other general thought about what you expect from Brodeur in 2009-10?  Either way, let's discuss it in the comments.