In Recent Seasons, the New Jersey Devils have "Slumped" in March

Share All sharing options for: In Recent Seasons, the New Jersey Devils have "Slumped" in March

Alternate Title: The Month by Month Results of New Jersey Devils Since 2003-04

The title is not a hook, it is provable truth.  If you break down the last 5 Devils seasons into their record per month, you'll find that the Devils have consistently dropped in points percentage in March in each of their last 4 seasons.  Whether or not you want to say they specifically slumped is a matter of debate, but in relation to the Devils' performance in other months, I'd say it's a "slump" of some sort.  Call it the "March Drop," if you will.

While in line for the prospect development camp's final scrimmage on Saturday, I was talking to the fellows behind me in line about this and that.  Free agency, arbitration, the Devils, and etc.  Anyway, an offhand comment about how the Devils "always seem to slump in March" stayed with me from the conversation.  It's not the first time I heard that thought and I wondered about it from time to time.  After reading that Schnookie's ever so positive look at the schedule at Interchangeable Parts suggesting the same thing will happen in this coming March, I figure this was something to investigate.  Surely, the Devils couldn't be constantly dropping in performance in recent March's, could they? Well, the investigation surely taught me that the thought is definitely has merit to it; and I'm sure you'll gain something out it as well.

NHL.com maintains the schedules for each team all the way back to 2003-04 and with cross-checking the results with the Devils' final standings at Hockey DB as a check; I used the last 5 seasons as my range for this investigation.  I decided to focus on points percentage - percentage of points earned out of potential points - as opposed to a straight winning percentage as to at least give some value to earning a point in games.  To that end, I've combined overtime losses, ties (last used in 03-04), and shootout losses as they are all worth the same; while counting all kinds of wins as just wins.   With this in mind, I was able to record and chart the Devils' monthly performance.

What follows after the jump is a breakdown of each season.  Amazingly enough, the Devils did see a drop in results in March after the lockout regardless of changes in coaches and personnel.  There's more to it than just that.

The first season in this window of 5 seasons is 2003-04.  The last season prior to the 2004-05 lockout, the first after the Devils' 2003 Stanley Cup, and Pat Burns' last season with the New Jersey Devils as head coach. 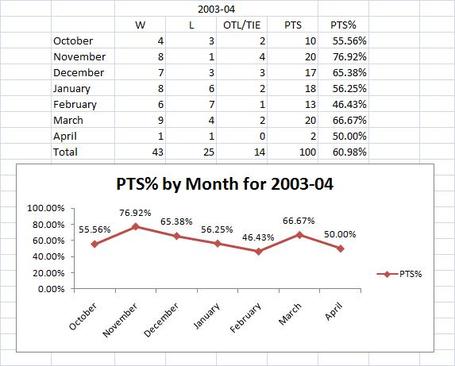 Now, the Devils didn't come flying out of the gate in October, but they really turned it up in November with only one regulation loss. However, while the points percentage isn't what you could call bad in December, the Devils' results did drop off all the way to a poor February.  The Devils actually did quite well in March, matching November in total points earned (20) and the Devils won more games (9) in March than in any other this season. Yet, that they lost 4 games in regulation hurt them in terms of point percentage - not that 66.67% is anything to sneeze at!  A short April - 2 games - skews things.  However, this is the only season where the Devils improved over prior months in March.

The lockout mercifully ended after one season and many wondered what the Devils would do in the "New NHL." In retrospect, we can say they would continue to be one of the top teams in the NHL (and if you need proof for that argument, then this post should interest you).   This season is where we first see the "March Drop," in this five season window. 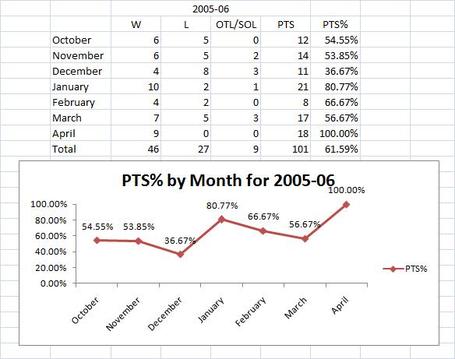 Once again, the Devils struggled a bit in October - only to not really fare all that much better and really struggle in December.  Larry Robinson eventually bowed out of the Devils' head coaching position with Lou himself taking over as the interim head coach.  However, what really transformed the Devils was the return of Patrik Elias.

Elias suffered from Hepatitis A during the lockout, but he battled the ailment, worked his way back into shape, and played like he was on fire from January to February.  The Devils caught on with Elias; following up their worst month in this 5 season window with one of their best in January.   An Olympic-shortened February was positive, but the Devils "came back to Earth" in March.   Alas, the January-February results were only a harbinger to a massive winning streak.  The Devils won their last few in March and then proceeded to win every single game in April - regular season and playoffs included.

In terms of points, points percentage, and record, March 2006 was still better than either October, November, or December 2005 for New Jersey.  The drop in results can be explained away simply by the fact that the Devils were so hot in January and February, they were due for some letdowns.  Elias couldn't spark the team all through 2006.  Moreover, the Devils regained their hot form and turned it into a veritable inferno for April so it wasn't as if March crushed the Devils.

In the summer of 2006, Lou did not want to remain as head coach and looked for a full time replacement to take the Devils to the proverbial next level.  However, the decision was to name Claude Julien as head coach for the 2006-07 season. 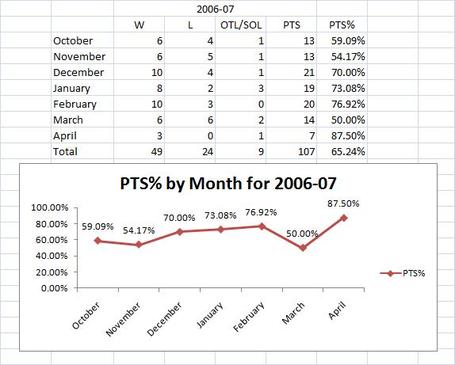 Under Julien, we can see the starkest example of the "March Drop."  While Julien's line-matching, conservative style of coaching may have bothered some fans, you can't argue it wasn't successful.  The Devils enjoyed their best October in this 5 season window under Julien.  More impressively was how he had the team running in December through February.  60 of the team's 107 total points came in those three months and everything seemed all good from the outset. And why not? The team had 86 points before March began!

Yet, Julien supposedly lost the locker room in March and the results clearly show that.  After going 28-9-4 in those three months, the Devils follow it up with 6-6-2?  Was it the losing that led to the players losing trust in Julien? Was it the other way around? Was it just another case of the team being "due for a letdown" after performing so well?  I don't know.  Regardless, whatever the reasons were, Lou fired him a game into April and became the interim head coach again.  At least the Devils finished strong in April.

Still, among these five seasons, the drop from a 76.92% point percentage to 50% is still the largest. Even by sheer records alone, it sticks out like a sore thumb. It's the only month where the Devils didn't win at least half of that month's games in 2006-07.

In the summer of 2007, Lou decided to give a major junior head coach a chance, Red Deer's Brent Sutter. While Sutter became the head coach of a very successful team, there were some bumps in the road in his first season in the NHL. 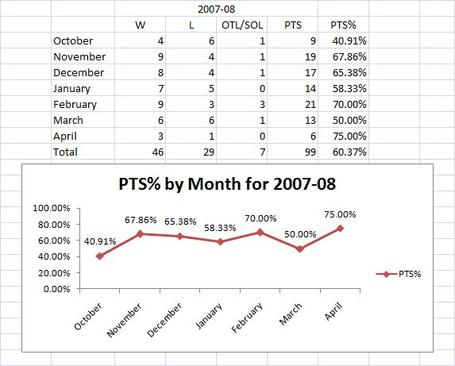 With 9 straight road games due to the delays in opening the Rock, the Devils had a rough October.  However, Sutter and the Devils righted the ship in November and December to provide some solid results.  It bears mentioning that the Devils did dip in points in each month from November to January.  However, the Devils really showed up in February, earning 21 points - tied with January 2006 and December 2006 as the second best months in raw points in this 5 season window.

But again, there's that pesky "March Drop" and it manages to be even worse in terms of points earned than March 2007.  Now, Sutter wasn't fired during that season and I'm not really sure as to what to point to as a likely cause for the team's drop in performance.  Not that you or I would expect a 8-3-1 record or some such; but something definitely better than 6-6-1!  Once again, the Devils follow up a relatively poor March with at least a solid end in April.

So Sutter improved in most aspects in his second season with the Devils by not constantly jumbling the forward lines, the players buying directly into his tactics for possession hockey, and allowing defensemen to pinch in when the opportunity was available among other things.   This would lead the 2008-09 season to be one of the best Devils regular seasons in history, but what of the "March Drop?"  Well... 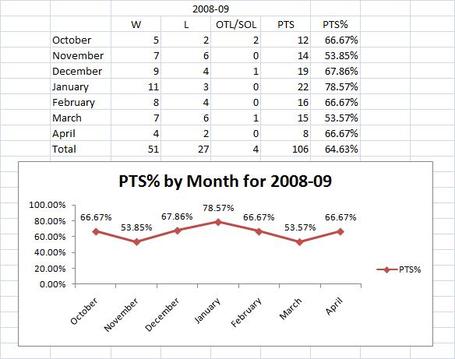 While this is the most "consistent" among the 5 seasons, once again, March featured the Devils slipping in performance.  There is still plenty of praise, though. Sutter did get the Devils off to a good start with 12 points (same as in October, but the Devils won more one more game then, so I rate that month as "better").  After a mediocre November, Sutter and the Devils got it together in the next three months.  January 2009 was the single best month in terms of points and wins with an astonishing 11-3 record.  (I'd rank April 2006 higher if only because the Devils didn't lose at all that month)

While March 2009 started off well enough, the Devils simply slumped in the last two weeks of the month - leaving Devils fans to wonder what went wrong.  A simple lack of intensity?  Comfort dulling the desire to play like it's the playoffs every night?  Merely that "they were due for a bad stretch?"  Again, I don't know.  It was yet another March where the Devils ultimately did worse than in February.  Sure, it was an improvement upon March 2007 and 2008; but that's not saying much as the Devils only earned 1 and 2 more points than those months, respectively.  And again, the Devils at least finished the season on a positive note.

However, I couldn't prove to you or tell you exactly why the Devils "slumped" in March from 2006 through 2009.  Just that it did.   What it does tell me that how Jacques Lemaire and the Devils will handle March will definitely be of interest.  Will the Devils "slump" in performance for a fifth straight season?  Or will they at least maintain or improve their form when that times comes?

More importantly, what can the Devils do to avoid slumps or prevent them from defining an entire month of hockey?  Truth be told, I would have to think every team in the league - even Detroit - encounters this during some part of the season. How do they handle it? Could the Devils incorporate what they do into their gameplan?  Could it come at the cost of success elsewhere?   Again, I do not know, but I would love to hear what you think on this matter.