I just got back from the Rock AmeriHealth Pavillion, where the Devils ended their prospect development camp with a scrimmage today.  Truth be told, I got there at about 8:45 AM and there were already about 20 people already there waiting.   While fans didn't fill the entire bleacher sections at the practice rink, a significant crowd appeared for the free Saturday morning event.   Pretty impressive given that the Devils just announced this yesterday morning!

It was a smart move to open up the last scrimmage to the public because everyone on the ice gave a strong effort. With it being the end of prospect camp, nearly everyone wanted to make a strong final impression in front of Lou (of course he was there!) and the coaches present.  It was so intense, that in a first period fight between Ashton Bernard and Harry Young, Bernard actually ripped and tore Young's jersey!  I don't comment much on fights as I think they're stupid, but this was particularly impressive - I never saw such a thing before.  A perfect picture of the energy levels of some of the prospects! 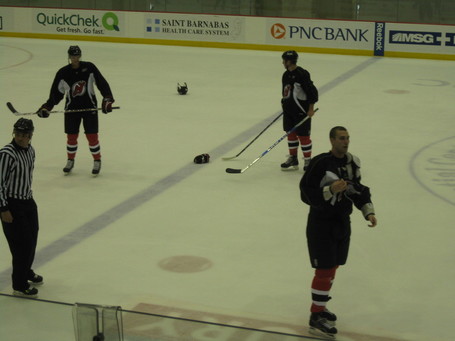 The scrimmage itself was a very up-tempo affair, with an emphasis on constantly attacking.  The moment there was a turnover, the team who won it was simply flying ahead.  Needless to say, with a total of 77 shots on net, neither sides' defense really did well.   That said, it was an exciting game, every player hustled, and the fans had every reason to be appreciative.  The Black team won the game 4-3 due to a penalty shot goal by David McIntyre.  Instead of penalties, the scrimmage punished illegal play with a penalty shot.  Here's a still of the move that beat Frazee for the game winning goal. (I apologize for the poor quality of this one in particular). 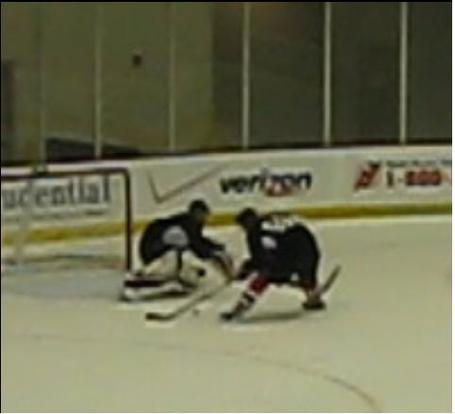 I've taken some pictures of the game itself, which I'll mostly upload tomorrow.  In any case, thoughts on certain players come after the jump.

A few players in the scrimmage, in my opinion, really stood out on both teams.  First and foremost is Mattias Tedenby, who wore #62 for the White team today.   While he didn't score a goal, I can easily see why some Devils fans are drooling over the prospect. He was in near-constant motion and in a game where everyone was hustling, no one could catch Tedenby when he turned on the engine.    Tedenby played with a great level of confidence, took guys on one-on-one, dazzled the crowd with his stickwork, and definitely warranted your attention every time he was out on the ice. The only knock I can say about him from today was that some of his passes were just not smart. Then again,  He's still got a contract with HV71, but I can see why some want him in a Devils uniform right now!

With respect to the Black team, I felt Rod Pelley (#10), Jacob Josefson (#60), and Matt Halischuk (#50) were all equally impressive and the best on that side of the ice.   Between the two sides, I'd say the Black team were the better team at maintaining offensive possession and controlling the puck.  A lot of that has to do with the work of these three. They kept pressing on the puck, they crashed the net when necessary (and in Pelley's case, crashed into the net on one occasion in the third period), their passing was fairly solid, and they were able to pour on the offensive pressure at times.  They weren't the "stars" of today, but they played very well.  We'll definitely see Pelley in New Jersey, and this has to be good signs for Halischuk's chances. Josefson will go back Djurgarden for another season, but I'm looking forward to seeing him come over after then.

There were a few surprises in the scrimmage in terms of who stood out.  While Tedenby, Pelley, Josefson, and Halischuk did well - they are among the top prospects in the system.   In terms of those "under the radar," I'd have to credit Eric Castonguay (#46, Black), Derek Rodwell (#66, White), and Alexander Urbom (#41, White).

Castonguay played mainly in Trenton last season, but he definitely showed off his skill set today. He not only hung on the top lines on the Black team, but was especially noticible on the forecheck and in going to the net.  He scored a lovely goal to finish off a massive clearing miscue from the White team.  He earned that one, fair play to him.  He got a couple of games with Lowell on a call-up basis in his last two years of pro hockey.  I wonder if this will be the year he sticks in Lowell?

Rodwell was the Devils' fifth round pick in this recent draft, but he played like he should have gone much higher. Next to Tedenby, Rodwell was constantly charging up ice on offensive rushes and in battling for the puck.  I didn't realize he was that agile!  He took some physical play well without having it throw off his game.  Rodwell drew a penalty in the second period and scored on the ensuing penalty shot, giving him a goal for the day.   North Dakota fans, I think you're going to like this guy - a lot.

Lastly among the surprises, there's Urbom.  Given that the descriptions I read about him project him to be a defensive, physical defenseman, I was pleasantly surprised with how mobile he was on the ice.  Definitely not a slow, plodding defense-only player.  He nailed some long passes up ice, pinched in a few times, and threw some nice hits.  I'm not really sure where Urbom is heading next season, but he has been called into the Sweden development camp for their U-20 team with Josefson and Tedenby, per Matt Gelb.  Wherever he ends up, how he develops will certainly be of interest.

With what I saw of Jeff Frazee, I think he will be fine in Lowell.  He had decent lateral movement and did well to get in front of the puck.  I wouldn't say he had a great day, but he wasn't poor either. If I'm not mistaken, he switched up between the two teams - but it's hard to be sure since none of the goalies had numbers.

Of course, this is all based on just one scrimmage.  So I wouldn't take all of this to mean that these players were the only ones who did well in the Devils prospect development camp this summer. Still, it was an entertaining game , so thanks to the players for that; and I thank the Devils organization for opening it up to the public.   At the conclusion  of the scrimmage everyone shook everyone's hand and so ends the 2009 prospect development camp for the New Jersey Devils.   Now, the dog days of the offseason are upon us. 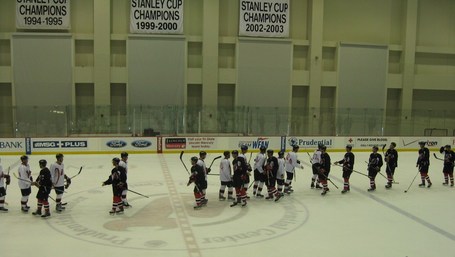