Share All sharing options for: April 3: Pucks and Giveaways

Given that Martin Brodeur was officially honored on April 3, Brodeur got some sweet stuff.  He got a golfing vacation from his teammates (which we all hope he won't have to use until, say, July); some paintings in his honor; the announcement of a plaque commemorating the achievement at Martin Brodeur Arena; and that awesome silver plated goaltenders' stick.

He also, unfortunately, got the chance to play due to a Kevin Weekes knee injury that we now know will have him benched for 2-3 weeks, according to a report at NHL.com.  Brodeur came in and didn't have a whole lot to do, but did get hung up in net. The Devils did break their winless streak though in a 5-4 win in overtime.

Brodeur wasn't the only one with the opportunity to get something special. The Devils also held a second Random Puck night.  Presumably, to make up for how poorly the first one went.   The deal was the same: 500 pucks signed by a Devil at random, $20 each.  However, the Devils did a much better job in this process than they did back in January with two big changes.

First, and this was the big one, each person was only allowed to buy one puck.  Last time, there were people buying up to 10.  I mean, they still had to pay; but there were definite horders.  That wasn't happening.  Second, the area for the pucks was an actual queue.  Security was able to manage the line, you couldn't sneak in and steal a puck, the layout kept that line in motion for the most part, and there wasn't a large crowd blocking the way.  It meant the line extended all the way through the lower concourse to Section 1 (the giveaway was at the Verizon Tower, so that's about Section 16/17! A good long line!)

Nevertheless, more people came out of this happy and good job to the Devils for doing it right this time.  By the way, I got the game early enough and managed to get one of them signed pucks: 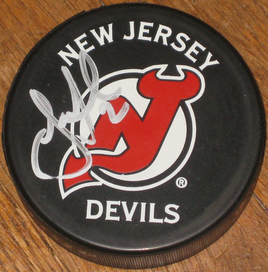 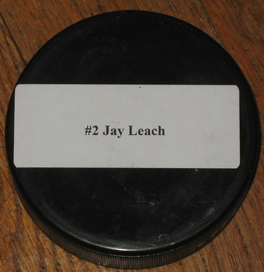 Anyway, everyone in attendance also got not just one, but two items commemorating tonight's event, Brodeur's 552nd win - not the 554th he earned that night.  First, everyone got a stick:

Perfect for Stick-High Fives.  Note the little NHL foil on the corner. This wasn't just some cheap stuff. This was official merchandise.   It also features the, er, logo for Brodeur's accomplishment: 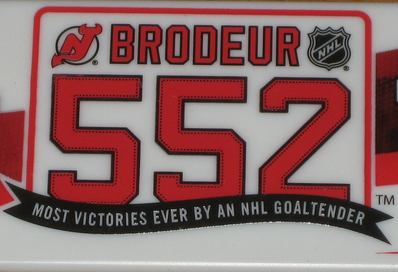 The second item is a poster, but the cool part about the poster is on the back: 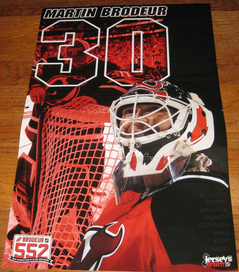 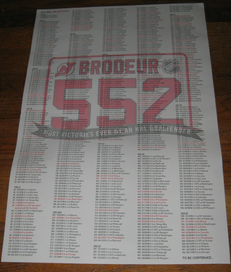 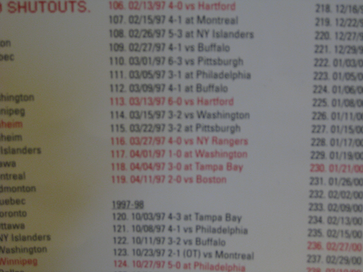 That's right, it's the final score of every single one of Martin Brodeur's 552 victories, with red highlighting the shutouts.  This is actually pretty useful to get a quick view of how awesome Brodeur was at times.  For example, he ended the 1996-97 season with four straight shutouts.  Be amazed at how big the 2007-08 list was; marvel at all the red under 2003-04; and scratch your head at the two 0-0 games he was in!

This was a good giveaway for a big night for a legendary goaltender.  The organization also did a better job than they did last time for the Random Pucks. All of it made it more than just a regular game on Friday night.  Of course, the biggest prize was seeing the Devils win their first game after 6 losses; but that wasn't a guarantee.