Devils Solid in Back-to-Backs This Season

Share All sharing options for: Devils Solid in Back-to-Backs This Season

Last night's 3-2 win over Buffalo concluded the last of the 19 back-to-back sets of games the Devils played all season.  That's right, 38 of the 82 games the Devils have this season came on consecutive dates, amounting for a potential of 76 points.  As a quick analysis, let's take a look at how they did. 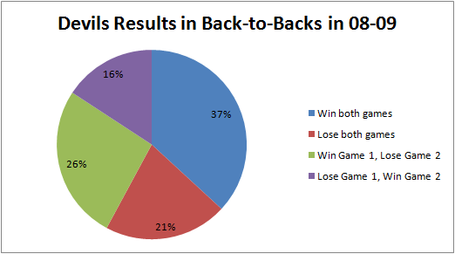 The Devils got both wins in 7 of the 19 back-to-backs, which is impressive enough; and they managed to get at least one win out of 8 additional back-to-backs.  Only 4 times did two straight losses occur; and in two of those, the Devils managed to get a post-regulation loss for a point.  Truly, there were only two sets of back-to-back games where the Devils got 0 points: 11/8 in Detroit and 11/9 against Edmonton; and 3/22 in Boston and 3/23 in Philadelphia.

That's pretty impressive.  The numbers point to the Devils having been more successful in the first game in these sets.  They have a record of 12-5-2 in that first game, where New Jersey has earned 26 points out of a maximum of 38.

In the second game, the Devils maintained a winning record, but's a lesser one of 10-8-1.  That's still 21 out of 38 points, which I don't believe is bad at all.  When you factor in the additional fatigue, additional risk of injury from a lack of rest, and travel usually involved in that second game, it makes it much harder to play.  Given that New Jersey still took 55.26% of all possible points in that case, it's not a major failing of the team. If anything, it's a sign that the team can get motivated and stay focused for that second consecutive game to earn a positive result.

Overall, the Devils took 47 points out the 76 points available, which is a point percentage of 61.84%.  This is fairly consistent with the Devils' season so far; where the Devils have earned 102 points out of a possible 158, a percentage rate of 64.56%.  This makes sense since back-to-back sets of games have made up a significant portion of the Devils' season.   In short, the Devils have been solid in consecutive games this season and it's a reason for their success this season.