On Shots, the Devils' Defense is Pretty Good

Share All sharing options for: On Shots, the Devils' Defense is Pretty Good

One of the common praises of the Devils within the last 15 years or so is that they've had an amazing defense in conjunction with a legendary goaltender.  After all, it was blueline led by the definition of stability and hard-hitting, Scott Stevens, and fantastic two-way defenseman, Scott Niedermayer.  Plus, the team as a whole has been taught that defense is paramount regardless of the coach and the style of the league - from Jacques Lemaire to Larry Robinson to Pat Burns and to Brent Sutter today.

Today, that praise has been de-noted for a "no-name" or a "less heralded" crew, the latter noted in an article by SLAM! by Stephen Knight (h/t Tibbs & Adragna for pointing it out).  When you consider the group on paper is Paul Martin-Johnny Oduya, Colin White-Bryce Salvador, and Mike Mottau-Andy Greene (Niclas Havelid notwithstanding), it's not really impressive looking at first.  OK, Martin is quite the underrated minute-man.  Yes, Oduya and Mottau are playing very well.  Yet, like last season, it's a great example of a whole being greater than the sum of their parts.

So I decided to do a very brief look back in stats on how the Devils have fared in the average shots against per game stat over the years.  NHL.com has team stats as far back as 1997-98, back when Stevens, Niedermayer, and Lyle Odelein ruled the blueline.  I only looked at shots against per game averages because I feel that is a stat more "controlled" by the team's defense, more than anything else.  The goals against average is definitely influenced by the goaltender in net; and penalty killing situations are more for special teams than just defense.  If anyone has a suggestion on what other stats help determine a good defense, I'd love to include it in a future post.  For now, this is a quick and dirty analysis.

I also provided some perspective on the season stats, I've also looked at where the Devils' ranked in each of those three stats from season to season.   What good is having a 2.32 shots against per game average if you don't know where that ranks in the league?  Such a perspective is important, considering that the league's offense really opened up after the lockout (The Devils' average goals against per game shows evidence of this, but that's for another post). 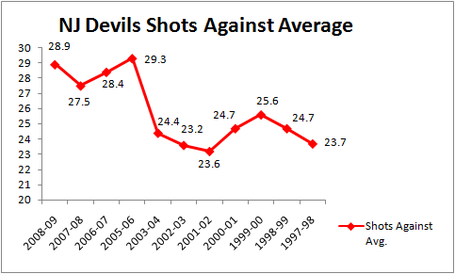 The shots against per game average for the Devils has stayed consistently under 30 a game.  However, I see a pretty bad upwards trend going through this season.  I think it's indicative of a number of factors.  One of which has to be the personnel on defense.  Another has to be the general style of play post-lockout, the shots against per game average just skyrocketed from 2003-04 and onwards.  Justifying that this is the case and that the Devils' defense hasn't fallen apart are the relative league positions of these averages. 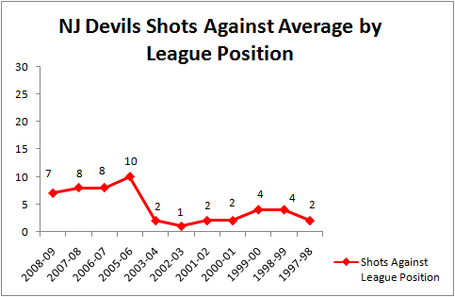 Just like with the shot averages, the Devils have trended down (yes, down) in league rankings in this category.  however, you have to consider the positions prior. As you can see, the Devils were a seemingly perennial top 5 finisher in this stat.  These were the years of Stevens and Neidermayer.  Stevens (among others) retired after the 2003 Stanley Cup, Niedermayer bolted to Anaheim after the lockout and amidst coaching issues, poor signings on defense (I refuse to remember Vladamir Malakhov's second run in New Jersey) and adjusting to changes in the game over all, the Devils' shots against average jumped up.

Yet, they were still a top 10 team in that category.

Interestingly, and a lot of credit goes to the defensemen here, is that the Devils have improved relative to the league in this stat in recent seasons.  OK, the actual average is still well above 27.  Yes, it's going up this season.  However, that is happening across the league.  The Devils are moving in the right direction relativeto other teams.

Over these past three seasons, the Devils have still suffered numerous changes. Among other things, the blueline has endured two new coaches (Claude Julien, Brent Sutter); the Devils organization signing up to 9 defensemen and carrying them on the roster last season; those 9 defensemen being rotated in and out of the lineup; inexperienced defenders like Johnny Oduya and Mike Mottau getting literal on-the-job training (to great success); and roster changes forcing Colin White and Paul Martin to take on larger roles.

Given the importance of consistency and chemistry when it comes to positioning, defensive awareness, and on-ice decision making, this is a lot to ensure!  Some of these would cause a defense to start falling apart on it's own!   But the Devils not only endured, but they've improved in comparison with the league.

No, the Devils' defense isn't anything like it was 10 years ago.  Hall of Fame talent isn't so much replaced as it is "filled in."  We won't see anything like it again short of a league-wide sea change towards defensive hockey as witnessed in the mid-1990s.  There isn't a "big name" defenseman on the blueline, and since the Devils used to have two of them, the current defensemen group are "unhearlded."

Fortunately, they are getting some praise for what they have done this season.  At least when it comes to the average shots against per game that the Devils allow, the praise is definitely warranted.  This is a pretty good group.