No Connection Between Devils Shooting and Scoring Leaders

Share All sharing options for: No Connection Between Devils Shooting and Scoring Leaders

Today, Tom Gulitti pointed out that Zach Parise is about to be the next Devil to break a franchise record: shots in a single season.  John MacLean currently holds that record with 322 in 1988-89.  Parise has 320 and will definitely break it tomorrow night in Chicago unless Parise has a really bad night.

Now, Parise currently leads the team with 41 goals, 88 points, and 320 shots.  MacLean led the Devils back in 88-89 with 42 goals and 87 points.  Claude Lemieux is in third with 311 in 1992-93 and he led the Devils in scoring with 87 points; but not in goals: he only had 30, Stephane Richer had more with 38. So I got to wondering, where do the Devils' shot leaders rank in scoring?  Could there be a correlation between the two?  After all, a Great One said something about missing all the shots you never take.  So shoot and you'll get points. Right?  Lemieux's 92-93 season is evidence against that, but perhaps that's only an exception?

I used NHL.com to see what the numbers have to say about this.  Unfortunately, it only goes back as far as 1997-98.  Based on Gulitti, I only know about MacLean and Lemieux before that date.  So if you have any additional information, please let me know and I'll add it.  Clarification note: All ranks are within the Devils for that season. 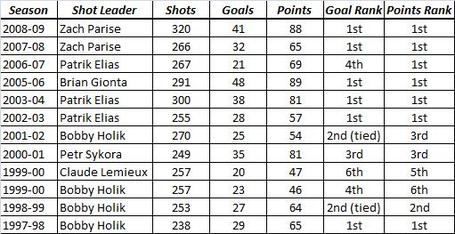 Well, this chart really shows that there is only a connection if you don't go as far back as 2002-03, when Elias was the leader in shots.  Being the shooting leader 3 times means shooting a ton isn't something uncommon to Elias, and it's a part of the reason why he's climbed his way up to become the franchise scoring leader.   Gionta fired away en route to the franchise season record of 48 goals.  Parise's accolades speak for themselves.

Holik dominates prior to those years (and note that Claude Lemieux tied him in 1999-00!), and I think it's a look back to what he did for New Jersey.  He wasn't just a third line checking center.  He made plays happen and took his own initiative while providing some good production for his role.  It's partially why he was so highly sought after he became a free agent.   It's partially why the Rangers offered him a ridiculous $9.5 million/year deal.

That said, those same years are clear evidence against a connection between more shots and more production.  Only in 1997-98 did Holik lead the team in shots, goals and points. It wasn't until 2002-03 when Elias repeated that feat - with one less goal and 8 less points!  I'd like to think 1999-00 was an exception where the shot leaders weren't top scorers on the team; because in all other seasons, the leader in shots is among the teams' top three scorers, has contributed at least 20 goals, and 55 points.

There are numerous factors for this that had to have this effect.  Just to name a few: the player itself (e.g. talent, decision making), the quality of the linemates (you need space to shoot), the style of hockey played at the time (defensive hockey was all the rage before the second lockout), and the quality of the opposition (again, you need space to shoot and shoot well to score).

So there doesn't seem to be much of a connection given that stretch from 1997-98 to 2001-02.  Shooting more than any other Devil in a given season may mean you're more likely to be one the top scorers on the team. But it won't necessarily mean you'll be leading the team in scoring.  That shouldn't be too hard to swallow - the shots have to go into the net for them to mean anything more than a shot on net.