Tonight, all the intangibles were really in favor of New Jersey.  Tonight, the Devils had a shot at history.  Tonight, the Devils did exactly that when they defeated the Chicago Blackhawks, 3-2.  Right from the first shot of the game by New Jersey, which was a goal by Jamie Langenbrunner, to the end where Martin Brodeur's toe made the final save as the seconds ticked down.

NHL.com is filled to the brim with Martin Brodeur content.  You can even go and congratulate him through an e-mail via NHL.com!

This accomplishment was so big, it's even on the front page of ESPN.com as the main headline.  Yes, hockey as a main highlight for ESPN - and with Martin Brodeur as the subject.  I even took a print screen of it: 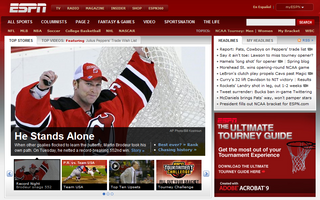 But the most notable thing about tonight's game, being at the Rock, was the crowd.  From minute one, the crowd was chanting "MAR-TY, MAR-TY, MAR-TY," even more often than the standard "Let's Go Devils" and the Rangers Suck chant.  Brodeur was the subject of tonight's game, save for a part of the second period.  When Patrik Elias set up Brian Gionta for a beautiful one-timer on a shorthanded 2-on-1, Elias became the all-time scoring leader in franchise history.  The fans immediately took note and started doing "PAT-TY, PAT-TY, PAT-TY" chants in addition to "PAT-RIK EL-IAS!" with two standing ovations at the announcement of his accomplishment.  I'm very glad we honored Elias' achivement, even if it was for a little bit.

From then on, it was all about Marty, right through his memorable cutting of the goal net through his post game interview.   The crowd, including myself, displayed their love and appreciation of Martin Brodeur all game long.  I didn't see anyone try to leave right after the game either.  I think it's fitting.  We all stayed as Martin Brodeur has always stayed a Devil - through the thick and thin.

Patricia at 2 Man Advantage literally sums it all up.  The ladies at IPB are ecstatic from the liveblog of the game.  Greg Wyshynski is Captain Bringdown with some venom for the NHL's lack of marketing of Brodeur.    Tom Gulitti has ALL the post-game quotes and comments that you need from the players.  On the flip side, SamFels at Second City Hockey is suddenly worried and disappointed in the team's performance.

Tonight, Martin Brodeur became the all time leader in wins.   Tonight confirmed what we all felt: that Martin Brodeur isn't just good. He's the best.   My thoughts on the game itself, after the jump.

The Devils especially exposed the Blackhawks whenever the Devils' defense intercepted a pass or got a shot blocked.  There seemed to be one or two Devils already heading up and a pass to them just forced the Blackhawk defenders to get desperate.  Fortunately for them, the Devils didn't exactly capitalize on every opportunity.  I think on another night, the Devils do and this game's score is more lopsided.

Adding to that is that while Nikolai Khabibulin started off slowly, he raised his game as time went on.  Langenbrunner burned him on the first shot; but there was nothing the netminder could do about Travis Zajac's power play goal or the sublime finish from Gionta on this 2-on-1.

With 27 saves, and a good number of those being tough ones, he had a good night.  I'd like to think the Devils really scored four goals, with Elias putting home a loose puck not-really covered by Khabibulin in the third period, but Chicago was saved by a quick whistle from the refereee.

Needless to say, I don't think either team played particularly good defense. The amount of shots allowed dictate that, as neither the Devils or the Blackhawks did a good job in preventing chances from happening.  Both bluelines were more reactive, preventing second chances, trying to get a block or a deflection instead of relying on positioning.  Fortunately for both, both Brodeur and Khabibulin were generally good.  However, it meant both teams had some strong scoring chances.

As far as things I expected from the preview: the Devils took some dumb penalties and were fortunate the Blackhawks only got to make them pay for it once - only after giving up a shorthanded goal, to boot. Still, Bobby Holik had no business for that late hit and Johnny Oduya had no reason to close his hand on the puck.  Still, special teams favored New Jersey with a power play goal (Zajac) and a shorthanded goal (Gionta) so good job to them for keeping Chicago's power play to only one fortunate goal.  And the Devils basically owned Chicago on faceoffs with 68% of them won by New Jersey.

Ultimately, the difference was in the finishing - the Devils had it, whereas the Blackhawks mostly got lucky. Again, the Devils did have higher quality scoring chances and if it wasn't for Khabibulin, this is a blowout.  Brodeur was only beaten twice because of a shot going through complete scree - full credit to Cam Barker for somehow getting that one through traffic - and a bizarrely precise shot from the diving waste of money that is Dustin Byfuglien.  Seriously, the puck was about to be dumped out, it his a skate, Byfuglien just threw it on net, and caught everyone by surprise.

The first one wasn't Brodeur's fault, as you can't stop what you can't see; and the second one was a fluke.  Contrast that to the Devils' goals where the goal scorers were set up by Zach Parise (twice) and Elias.

Nonetheless, the goal for tonight, like all other games, was to win.  This win, however, is absolutely special.  For Patrik Elias becoming the franchise leader in points.  For Martin Brodeur becoming the all-time leader in wins.  For New Jersey being the center of attention in sports.  It may be for only one night.  But tonight, it was our night.