Share All sharing options for: Meanwhile, Patrik Elias is Doing a Thing

And the thing that he is doing is that he's about to become the all-time franchise leader in points. In Montreal, Elias scored a goal and got an assist, his 700th and 701st points, respectively. This ties him with John MacLean, the current franchise leader in points and a current assistant coach with the team. Elias has done this feat in 121 games less than MacLean and short of a tragic event, he will definitely pass him in due time. Like a certain someone else, Elias would like to do this tomorrow night against Chicago (h/t: Gulitti).

Elias, who will turn 33 in less than a month from now, has had a long career with the Devils. He has blossomed into a leader on offense for better (e.g. 2000-01) and for not-so-better (e.g. 2001-02, 2002-03). Elias has excellent vision, a good amount of speed, a strong understanding of playing defense (which is why you see him kill penalties), and not too bad of a shot. He's also quite clutch, with 65 game winning goals over the course of his career.

I took a look at all of the seasons he has been productive in (he played one game in 1995-96) and noticed quite a bit about him. 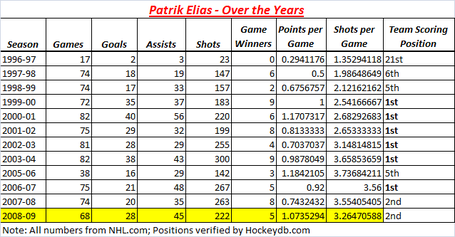 I put this chart together in mind to highlight how prolific of a scorer and shooter Elias has been over his career. He's had some excellent years, his best coming in the 2000-2001 season. Elias was the left wing of the famed A Line with Petr Sykora and Jason Arnott. While the whole line was effective, Elias was playing out of his mind. He ended up finishing third in the league in scoring that year! Something unheard of for a Devil!

While being among the league's top scorers has come and gone, Elias has spent much of his career among the best scorers on the team. OK, from 2001-2003, that didn't mean a whole lot as the team struggled to score; but Elias has continually led the way. Only two things have stopped him since then - fighting a potentially life-threatening battle with Hepatitis A, and the arrival of Zach Parise. Even then, he has only finished out of the top 5 in Devils scoring twice, and those were his first two productive seasons in New Jersey. 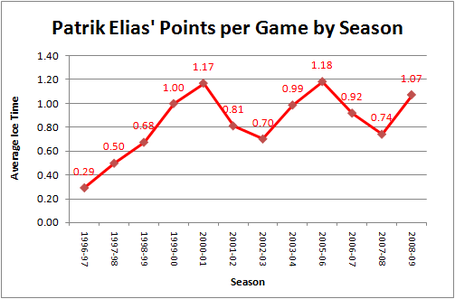 Now, if we track his seasons by his point per game average, you'll see that Elias has a bit of a trend going. He rises up to have a great year, he dips down a bit for two seasons, and it repeats over a 5 season period. Last season, he struggled to produce points. This after two very productive seasons.

Let me also use this to highlight how amazing Elias was in 2005-06. Yes, he fought a potentially lethal ailment and won. But you wouldn't have known that from his perforamance on the ice! He played like there was no tomorrow for opposing goaltenders and defenders. Elias' return kicked Scott Gomez and Brian Gionta into high gear, forming the then-feared EGG line. He took shots, he made plays, he had nights where he only slowed down to make a play, he threw hits, and did everything else in between. It's he was a knight and he found a rare sword in a RPG and basically wrecked monsters for 38 games. His points per game was even better tha his 96 point season!

Alas, it confirmed the trend as 2006-07 was a solid year for Elias, but at a lower pace - before bottoming out the next one. This season, it appears Elias is on the rise. If he keeps pace, it'll be for the fourth time in his career he averaged at least a point per game. And if the trend continues, expect 2009-2010 to be another monster year for Elias. 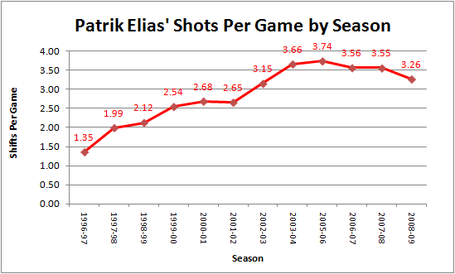 One thing that has been consistent about Elias over the years is that he shoots. A lot. And in a general upward trend, to boot. Amazingly, this does not correlate with his points per game (or even goals per game), as his most productive season came when he only shot the puck 2.68 times per game on average. While Elias' numbers tend be higher on the assists side, he's still firing at well over an average of 3 shots per game.

Not that getting shots on net is a bad thing. In fact, it's evidence that Elias' down years in production was not due to a lack of effort. Even as he gets older and the league gets more familiar with his game, Elias has been getting - and sometimes creating - plenty of opportunities to fire the puck on net on a given night. Some years, it works and he pots in 30+ goals; other years, you wonder if Elias is cursed as he seemingly hits the post 30+ times. At least, that's my explanation for the 2001-02 season. Elias response to that season was an even worse season offensively, but with a strikingly high number of shots on net. Since then, Elias has kept his average above 3 per night.

Tying it into this season, where as some players start to fade at age 32, Elias continues to thrive. This can be attributed to a number of things including: Elias' talent, his committment to remaining in shape and in health, and the Devils' offense in general (hard to set up guys if they're slumping). As it is, Elias is on pace to finish with about 87 points and 267 shots - which should put Elias among the top 30 in the league in both categories.

I also think by looking back at all Elias has accomplished, it highlights how impressive Zach Parise has been this season. For so long, Elias has been the leader of the offense. Now it seems that Parise has taken that role and is in a similar position to Elias' position back in 2000-01. Parise's current pace would have him set new franchise record for points in a season and finish among NHL leaders in scoring.

Back to Elias, I think when you consider his whole career, it shouldn't be so surprising that he is first one to take over John MacLean as the scoring leader for the franchise. Elias has led the Devils in scoring 6 times in his career, currently had 4 seasons with a point per game average or better, and he has been prolific shooter. He's not just having a great season, he's had a very solid career overall and always for the benefit of New Jersey.

Keep that in mind, should Elias get point #702 tomorrow night.