How Much for a Goal, Good Sir?

Share All sharing options for: How Much for a Goal, Good Sir?

One of the many things a fan of a team considers during the season is whether the players on their team are justifying their salaries.  This isn't simple, since many positions in many sports are important, but not easily quantifiable.  Take the checking forward.  We could go to a site like Behind the Net, only to find their even strength rating is quite low namely because that checking center is usually up against the opposition's best players and their primary job isn't to get points.

Nevertheless, I find it interesting to see how each players' results are worth in terms of money.  The season is still ongoing, but I decided to see how much money each goal, point, and minute of ice time (compiled from NHL.com, salaries from NHLSCAP) is worth if we assumed their salary could be divided up evenly over each stat.  It'll give some insight as to who's earning their contract so far, and something to talk about.  For example, amaze your friends that every minute Bobby Holik has played cost $7,246.38 each so far this season.  After their confused, let them know that every one of Paul Martin's goals were million dollar shots!

In this quick analysis, I'm ignoring goaltenders, it's just skaters in this thrown-together analysis since I'm more concerned with goals, points, and minutes. Besides, Weekes and Clemmensen have played way above their salaries for the most part.  Incidentally, among all 28 skaters who have worn the deviled NJ uniform, only Patrick Davis, Sheldon Brookbank, and Barry Tallackson failed to register a point.  Davis and Tallackson were call-ups, only Brookbank had a two-way contract.  For the interests of simplicity, I've rounded all total time on ice up to the next minute.  And I'm not including those who haven't played at least 300 minutes for New Jersey: Sorry, Brendan Shanahan! 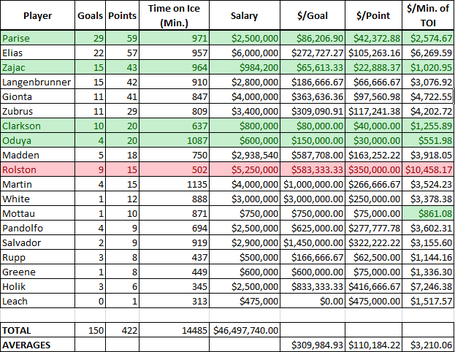 This is a good source of reassurance and perhaps new thoughts.  Travis Zajac and Johnny Oduya are not just bargains, but definitely in line for some serious raises after this season.  David Clarkson has definitely been contributing with a relatively small salary.  Also, Parise's salary goes up dramatically over the next two seasons ($3 million and then $5 million), so keep that in mind as you drool over that sub-$100,000 cost per goal.  Defensemen don't look too good here; but you can more easily argue they are getting good value for their minutes as they prevent goals. Especially Mottau, which probably helps explain why he's still around.

Furthermore, just to make this a separate point, Elias' production is truly justifying his big salary.  This is what you want from your $6+ million players.  Someone should perhaps tell a nearby hockey team that shall remain nameless this point of view. Actually, don't. Better that they throw their money away.

Lastly, to me, the only really bad contract here is Brian Rolston.  I know, he was expected to be a top 6 forward, I thought so too.  and I know he got hurt for a significant amount of time, and the Devils formed 2 scoring lines (and so Zubrus' and Gionta's contracts are more justifiable, I think) in the meantime, and so he's been relegated to the third line and some power play duty. He's doing more now, but it's still a lot of money for 9 goals so far.

Still, I think it's fair to say that the Devils are getting good value for their money.  I'm pretty impressed that each goal by the Devils (from players over 300 minutes) is worth a little over $300,000 each.  Though, I'm curious how it looks in comparison with other teams.  That may be more suitable for the offseason, though. If you have any suggestions, let me know!