Japers' Rink tends to look at CORSI and when you consider that sites like Behind the Net compile these statistics on a daily basis, it's not a bad stat to get an understanding of.   CORSI is basically the number of shots your team gets while you're on the ice minus all the shots against your team when you're on the ice.  It's more specific than a simple plus/minus rating; and you get an idea of how a player is performing with respect to the offense.  Ideally, you'd want a high CORSI number for your top forwards; however, your checking forwards and defensive defensemen likely won't.  No, it's not a perfect statistic.  There really isn't one; but it adds a dimension to understanding how well a player is doing.

That said, I wanted let's see how the current Devils roster is looking with respect to CORSI.  I've excluded any players who have not played 10 or more games with the team.  So while they are now in Lowell, Anssi Salmela and Petr Vrana are included.  Guys who were just up for a call up to fill in a spot (e.g. Nicklas Bergfors, Pierre-Luc Latourneau-Leblond) are not.

Also; while CORSI is usually looked at for even strength situations, Behind the Net does compile them for power play and shorthanded situations as well. They are going to be very skewed, however, as the killers in both situations would look to dump the puck as opposed to create offense.  Still, it would be good to see who's out there when the shots are being taken.   For both special teams situations, I've only included those who have averaged at least a minute of ice time this season. This way we're only looking at the regulars.

In either case, big chart and a lot more words continue after the jump. 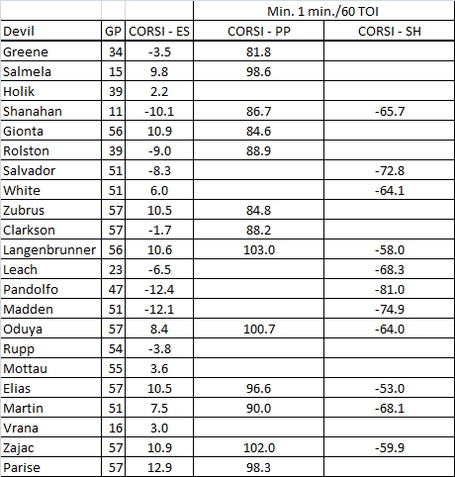 As thought, the top two lines for New Jersey have the highest CORSI numbers on the team.  Parise is the leader, who is just under 13 on CORSI, this season. The others are no slouches: Gionta, Zajac, Langenbrunner, Zubrus, and Elias are over 10 in CORSI.

While Zubrus hasn't been piling in as many points as these other five forwards (he only has 31 points, the rest have 45 or more), the high CORSI number provides evidence that he is contributing to the team.  He's creating space, winning the puck along the boards, and giving it off to Gionta, Elias, or the point for a possible shot.  I'll leave it to you to think whether he's worth the money, but do remember that at least.

While it has been stated that the Devils don't have a true checking line, the CORSI numbers reveal otherwise.  That Rolston, Pandolfo, and Madden have the lowest.  To me, that indicates that the other team is firing shots out there and their role is to limit them as best they can. Again, something we'd expect out of a checking line with respect to CORSI.

Shanahan is an odd duck in this one.  He's got a CORSI as low as Madden and Rolston; and that could be due to his recent role on that third line.  Still as he started out on the fourth line; Rupp and Holik are closer to 0. Rupp is below it, which doesn't surprise me, as his role is to literally bring the pain.  Holik, though, has a positive rating.  Odd!

What's interesting is that Oduya is the third Devil above 100 on the power play in CORSI.  His CORSI in even strength situations is actually pretty solid at 8.4.  This tells me that Oduya may be more offensive-minded than I thought. I still think he's a two-way player, not a true offensive defenseman in the sense of word.  And I think his even strength CORSI is boosted by the fact that he's usually out there when the top 6 forwards are out there (ditto for Martin).  Still, perhaps Sutter should use him more on the point, as opposed to Andy Greene (lowest CORSI among the Devils on the power play; not so good -3.5 in even strength).

In shorthanded situations, we can see that Brendan Shanahan has really been brought in for both sides of special teams.  He's gotten enough minutes in each area!  And he's been OK, at least interms of CORSI.  Yet, the CORSI numbers reveal themselves to be better for Elias, Langenbrunner, and Zajac - the forwards on these penalty kills.  Sutter does have them forecheck sometimes while killing and if there's a rush down ice while shorthanded, it usually does involve these three.  Either by shooting it themselves, or setting someone else up.

Oh yeah, I don't think it's accidental that Zajac and Elias are among the best Devils in CORSI in all three areas.  They truly have strong overall games. That  is not too surprising for Elias, as he's been used in all situations for years.  However, it's a very pleasant surprise for Zajac, compared to his sophmore season which typified the term slump, .  He truly has blossomed in his third season of NHL hockey!

These numbers also help explain why Pandolfo hasn't had such a good season - his CORSI on the kill is the worst.  I know he's not an offensive dynamo; but Madden at least can take it up ice.    Basically, when Pandolfo's out there, it seems the other team notices this and fires away.

Lastly, I think these numbers help realize that the Devils really don't have a true offensive defenseman.  Salmela still has the highest CORSI among defenders in this analysis. Oduya's and Martin's aren't bad; but they are usually out there when the top two lines are out there.  Salmela looked to shoot whenever he had the chance (to a fault, really).  Hopefully Salmela's game overall will improve enough to warrant a full season in New Jersey.  He could fill in that role to a point.  But if you want to think about trades, I'm sure Lou is thinking about a defender who can fire it strong and often from the point.

Still, by looking at the overall picture, it's pretty solid for the Devils.  Again, shots (and goals) are coming consistently enough and often enough when the top two lines are out there. The Devils, in fact, have a proper checking line if these stats are any indication.   And most of the players with negative CORSI numbers are sensible, given their regular roles.   As the Devils will continue to their current form and assuming no one enters a big slump, I expect this to continue.