Share All sharing options for: Slow Starts Have No Effect on New Jersey Devils' Success - So Far

The New Jersey Devils are certainly enjoying their hockey as of late. They won their last 7 games, they remain undefeated on the road, and they are currently as of this writing, the leaders of the Eastern Conference.  All while having a significant number of injured players and against an array of various opponents.   That said, among today's updates, Tom Gulitti reported from Jacques Lemaire thinks that the Devils could play better.

"I think our previous game was probably our best game we played all around," Lemaire said of the Devils’ 3-1 home win over Anaheim on Wednesday. "Tonight, we won, but I don’t think we played as good. Maybe some guys were a little tired (back-to-back games). But I want them to play like they played against Anaheim. Tonight to me was not a good night. I want them to play all the time their best hockey. So, it doesn’t mean we’re going to win more games or we’re going to have a better record. We might have a worse record and play better. I don’t know. Now, we’re getting the breaks, we’re getting the goals at the right time and things are going well."

Incidentally, Gulitti went on to list a number of impressive and praise-worthy stats of the Devils during this streak as well as noting in the comments that the Devils are 5-2 when they allow the first goal of the game.  That's pretty impressive all by itself, but I can't help but wonder if giving up the game's first goal that is an issue Lemaire is concerned with.  You would think that he would, as getting the first goal in the game normally swings momentum, builds confidence, and sets the tempo for at least the next part of the game.

I'm actually surprised he didn't specifically name the team's recent trend of allowing the game's first goal as an issue.  While the Devils, obviously, went 5-0 in those 5 games, they won after letting up the first goal in 4 of those games. 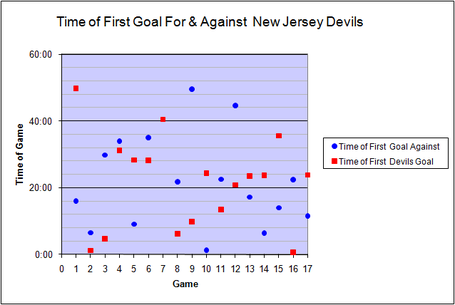 This situation has happened more often recently, four times in the last five games. Before then, it only occurred twice.   So giving up the game's first goal in the first period is really more of a recent concern.   The 5-2 record that the Devils have when that happens hides that little fact.

In the opposite situation, the record is quite positive.  When the Devils score first in the first period, they are 5-1.  Among those 5 wins, the opposition doesn't get their first goal until the next period with the first Pittsburgh win as an exception - they finally got on the board in the third period.

With respect to the Devils striking first in the game, the second period has been more fruitful.  The Devils have scored their first goal 9 times in the second period.  6 times their first was in response (either as an equalizer or the start of a comeback) to the opposition's first goal in the first period.  4 of those times came in the last 5 games  In those 9 games where the Devils have got on the board for the first time in the second, the Devils won 7 of them.  The only mis-steps were the games against Atlanta, where the Devils scored first but melted down in the third period, and Buffalo, who was already beating on New Jersey when the Devils finally scored first.

Lastly, there aren't many cases where the first goal of the game by either team comes in the third period. Twice, the Devils got their first goal of the game in the final period - one was a consolation goal in the team's home opening loss against Philadelphia, the other was the only non-empty net goal against Carolina.   When opposition finally scores their first in the third period, it's eventually a lost cause: the aforementioned first Pittsburgh win was the first example, the second being the fluke Steve Stamkos scored for Tampa Bay - though that led to a win via the shootout.

So what does it all mean?  This probably confirms what you already may know. Based on the data so far this season, I wouldn't worry too much if the Devils give up the first goal of the game.   I'm not exactly sure how or why, but the Devils just have the guts and heart to find a way to get an equalizer and eventually pull ahead.  A comeback will usually begin in the second period and before the half-hour mark of the game.

Will this always happen? Will this continue throughout the season?  Probably not. I would like to see the trends change such that the Devils are scoring first more in the first period and ahead of the opponent's getting their first goal. That would put the Devils in more advantageous positions to win the hockey game.  Not that it's been an issue now, but the Devils aren't always going to be able to find the goals to get a comeback going in every game from now through April.    Sometimes, they're going to have to make the effort to get the game's first goal themselves and build on it.  Hopefully, Lemaire will address this issue even if he isn't publicly mentioning it.