Share All sharing options for: The Devils Betray Your Trust (and Cash) with The Worst Bobbleheads Of All Time 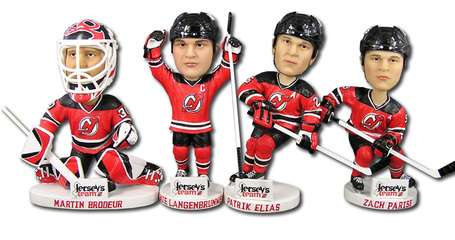 Back in September, Fischer did a fantastic, detailed post going in-depth on which Devils partial plans were worth your hard-earned dollars, and conversely which were not.  He also did an equally great one about the Devils mini-packages, which is where we look for his opinion (initially) on the Devils 4-game "Bobblehead Pack", which features replicas of Martin Brodeur, Jamie Langenbrunner, Patrik Elias and Zach Parise:

The Bobblehead mini-package is one of the two mini-packages that offer seats for the Devils red sections, the ones adjacent to the club seats in the lower bowl as well as the lower half of the lower bowl sections in either end. However, that's beside the point. The main point is you'd save absolutely nothing on games by selecting this mini-package. Not one dime.

The only benefits to getting this plan is that A) you get tickets to those 4 games on the plan for certain and B) you will get a bobblehead set of Devils players. The Devils' site page for this package is clear on this matter: "Bobblehead sets are available only to those who purchase this Bobblehead Pack and to full season ticket holders." I assume that it's one bobblehead per game, but I could be wrong. Also, if you're one of the first 100 people get to this package, you'll get an autographed bobblehead set. Still, bobbleheads are the only feature in this package. Great if you're a serious Devils collector or you're really into bobbleheads. Otherwise, I don't see any advantage to getting this mini-package over getting games separately.

Well, Fischer turned out to be pretty perceptive.  Unless these are mere prototypes, the Devils should apologize to any fan who plunked down $224-$460 for these lazy atrocities.  Considering you don't save any money from buying tickets to all the games individually, they could've tried some detail on these things.  At least the Brodeur one gets away with putting the right logo on the helmet, but honestly, if you covered up the names and showed them to even the most diehard Devil fan, would they know who it was?

As the proud owner of the well-crafted (if not totally accurate) Scott Stevens bobbleheads from way back, these look to be a disgrace.  If you did purchase one, shoot us an e-mail when you get them to let us know if there are any redeeming qualities.  We'll hold out hope that maybe the materials used on it are as good as the one for Scotty's, but were kind of doubtful.  Enjoy Tampa, Nashville and St. Louis!