Yesterday wasn't just the opening of the 2009-10 regular season for the New Jersey Devils.  It was also the official opening of Championship Plaza.  When the Prudential Center opened two years ago, there was a big empty space just outside of the PNC Tower.   The Devils and the City of Newark - specifically the Newark Downtown Core Redevelopment Team - have since been working together to get the surrounding area developed such that it's not just an arena surrounded by old buildings.   Since then, there are some new places to go around the arena (e.g. Brick City Bar & Gril; Brick City Coffee) and the Devils have redeveloped that big empty space to something they called Championship Plaza.

So at 2 PM, a press conference was held prior to the official Ribbon Cutting ceremony for the plaza.   It was raining prior, but almost on cue, the rain stopped, and the sky cleared up later on.  Among those who spoke included the Devils owners, Jeff Vanderbeek and Mike Gilfillan; as well as Bill Crowley, statue artist Jon Krawczyk, and Newark mayor (showing up fashionably late) Cory Booker. 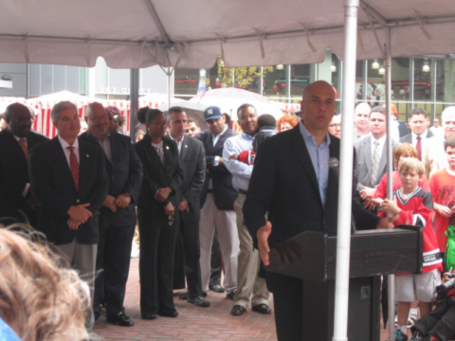 There wasn't a whole lot that was notable said outside of statements thanking those who made it happen, how this is a continued sign of progress, and so forth.  Gilfillan did share an amusing anecdote about how the sculpted rock that now sits in front of the plaza literally came at midnight that morning and how it was fully installed at 4:30 AM.  And a fan popped a balloon accidentally while Booker was speaking (and right in front of me!), leading to a quick quip from the mayor about how she could be banned from Newark International Airport like a certain talk show host.  It was a bit clever, honestly.

As far as the Plaza itself goes, it's still a largely empty space. But instead of painted blacktop, it looks like, well, a plaza.  The ground is now made of bricks, including a giant Devils logo in the center with the fan-purchased bricks sitting below with their phrases (including a marriage proposal). 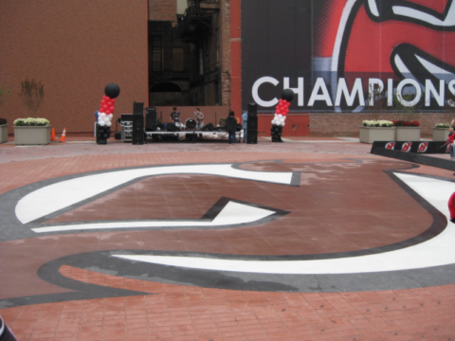 There are three other landmarks at the plaza.  First, the giant Championship Plaza banner.  I have no idea if was up for just yesterday.  But it definitely made it clear what the place was called. 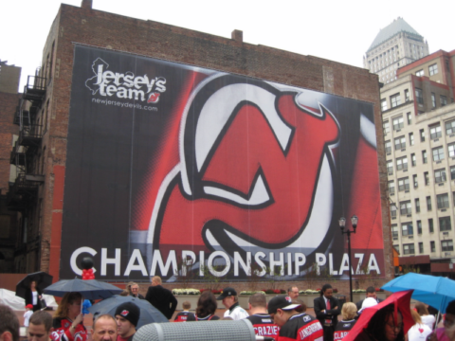 Second, the giant hockey player metallic statue sculpted by Devils fan and artist Jon Krawczyk, seen here in front of the statue.  During the press conference he claims that the stick is facing in the direction of "some other team's arena across the river."  I wonder who that could be and whether the Devils will play them on Monday? 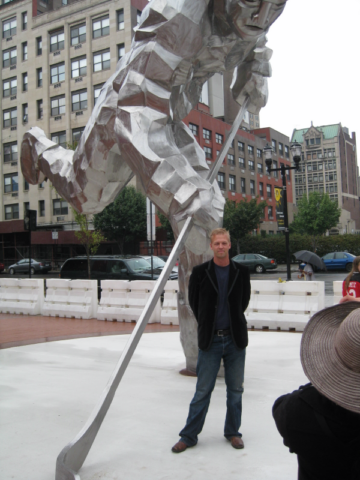 Here's a fuller version of the statue with the Gateway Center in the background.  I personally think this is a fantastic landmark for people to meet up. 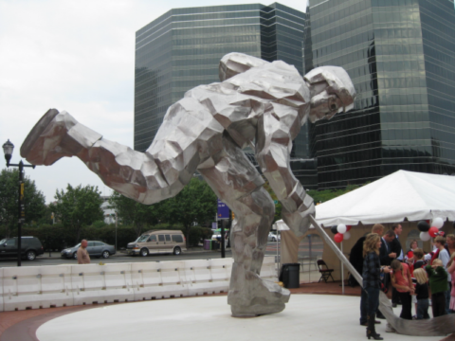 Incidentally, Cory Booker noted that the statue has no nickname for it yet.  Booker suggested the "Iceman Cometh" or somesuch.  I would personally suggest Scotty Steel-vens.  Feel free to come up with a much better suggestion in the comments.

Finally, the third landmark is the scuplted rock itself.  The rock outside The Rock has a plaque both on the rock and the platform itself. 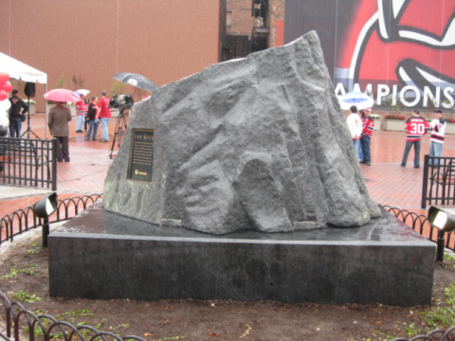 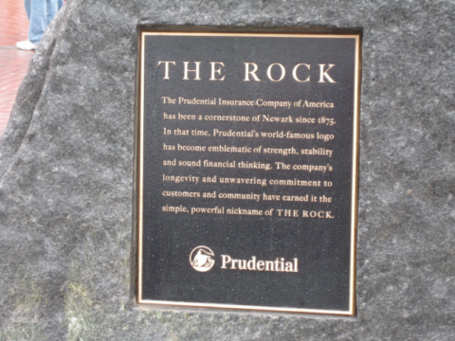 It's a nice and fitting touch, and not a bad advertisement of the arena's connection with Prudential.  An executive from Prudential also spoke, but the name unfortunately escapes me.   Another fitting touch are that all of the Devils' accomplishments as a franchise were carved into special stones in the ground.   This includes all of their division and conference championships as well as their three Stanley Cup wins.  Hence, it is truly Championship Plaza.  Here's the 2003 Stanley Cup commemorative stone. 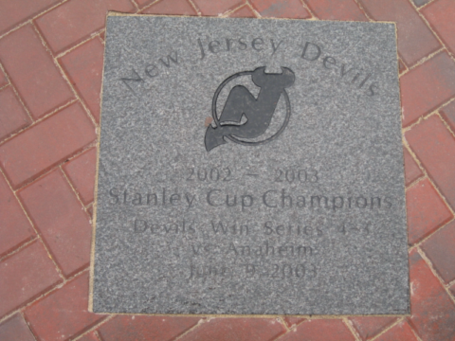 Of course, we'd love to see the fourth Stanley Cup come to the new plaza as soon as possible.  Last night's results notwithstanding.

Truth be told, the renovations to make Championship Plaza really makes the area outside of the PNC Tower look much better.  OK, it doesn't seem like much, but there really wasn't anything there before hand. Now there's landmarks to hang out at, there's ample space for "FanFests" when the Devils want to hold them (as they did yesterday afternoon), and aesthetically I think it just looks so much better than a dreary, blacktop area.  Fitting for the Brick City.  Now the Devils and the Newark Downtown Core Redevelopment team can work on the future projects to bring in more retail and to further develop the area.