Follow-Up: The New Jersey Devils Still Score the Most in the Third Period, but Shoot More in the First Period

Share All sharing options for: Follow-Up: The New Jersey Devils Still Score the Most in the Third Period, but Shoot More in the First Period

Earlier this month, I found that the New Jersey Devils endure slow starts when it comes to scoring goals - they tend to come mostly in the second period.  Then, in comparing the Devils' scoring to the league average from 1997 and onward, I found that the NHL as a whole scores most of it's goals in the second and third period instead of the first period on average.   Now that the Devils have played 11 games this season and with the month closing, as a follow-up to both findings, I decided to break down each game's scoring by period to see what we more we can learn in terms of trends and other findings.

In addition, I also recorded the shots the Devils put on net and shots they gave up by period in each game.  This way, we can see whether there is any connection on the surface to shots and goals.  We can see when the Devils are taking it to their opponents as well as when the Devils are taking so many shots against.  Given the now-depleted Devils defense - now without Johnny Oduya who might be day-to-day and won't play tomorrow per Gulitti, they'll have to be more focused in their efforts and in their shifts.  Knowing what period the Devils take the most shots against would certainly be helpful for that in my opinion. 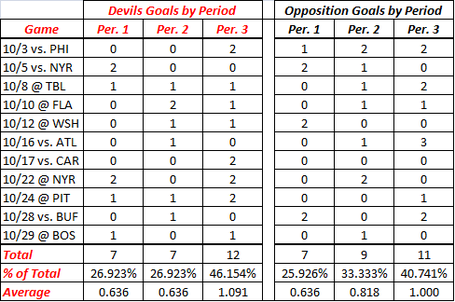 There doesn't seem to be a clear trend on either side, in my opinion.  With respect to this chart, the Devils offense would be wiser to get their goals sooner so they aren't reliant on a strong third period (or a few good shifts late) to win points.  On defense and in net, they need to play tighter in their own end and adjust themselves to how the opposition changes their tactics in-game.   More wins would come that way, even a few at home.  So shoot a lot elsewhere, prevent them on defense, and the goals will come

The shots by period, however, tell a different story. 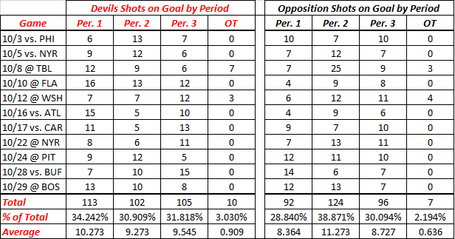 The Devils don't have a clear period of dominance in terms of shots.  Yes, the first period has seen more shots and five of their games had 10+ shots in that period.  Yet, in 6 games, the second and/or the third period put up 10+ shots as well.  But it's only an extra shot per period on average.  In terms of raw numbers, there have only been a total of 11 more shots in the first than in the second period.  As the chart breaking down the goals by period, it doesn't lead to more goals as the team has scored as many goals in the first (7) as in the second (7).  The third period sees a good number of shots on average, right in between the first and second periods in terms of shots, and yet it sees the most goals for the Devils.

The breakdown of shots against per period is certainly interesting. The opposition has take the majority of their shots in the second period, clear ahead of the other two periods in regulation.   This is aided/skewed by Tampa Bay's 25 shot effort that yielded them all of 1 goal.  Yet, the period of the long change yields more 10+ shots against performances with 6 than the other two.   It's also the only period where the opposition has taken more shots than the Devils this season as well.  Overall, the Devils defense has at least done comparatively better with respect to preventing shots in the beginning and the end of the game.

Yet, the opposition doesn't score most of their goals in the second period despite enjoying so many shots on net. Again, that happens in the third period where the Devils have allowed 11 goals this season.

I'm led to believe that this means that shots alone won't lead to goals. The quality of the shot and the on-ice situation is important.  The Devils' 2-1 win over Boston is a good example. Boston bombed New Jersey with 25 shots in the first 40 minutes of playing.  Yet, despite wearing down the Devils' defense, the shots were largely directed at Yann Danis or Danis had enough time to get into position to make a good save.   The only time he was beaten was when Patrice Bergeron got a pass from Marco Sturm after a big scrum in front of the net.  By the time Danis saw the puck, Bergeron put it into the largely empty net.  He was right in front of the net, wide open, and the pass was right to his stick. That was only one shot, but the opportunity to score on it was glorious.  The quality and the timing was impeccable.  Yet, the Bruins never generated as good of a chance with their other 12 shots on net in the second period.

The on-ice situation is actually more important of the two, as with nearly all of the Devils' wins this season, the game tying or game winning goal came in the third period.  Depending on what happened prior to that period be it starting down 2-1 or up 2-1 or just tied, the Devils' understood the importance of scoring then.  Their mentality seems to be based around that if they can "win" the third period or make the most of what scoring chances they get, they can come out of the game with points.  The opposition seems to understand this as well, and so both sides try and set-up a high quality shot (e.g. a point-blank deflection, cycling down low until an opening is found, crashing the net as the puck flies into or through the slot).  This makes for some tense, exciting third periods; and for the Devils to succeed with that mentality is admirable.

However, it isn't balanced and it basically means oppositions just have to really stop the Devils in the third. This can be by crushing the Devils so they can't come back or go ahead in the third to make the game their own.  Or by sitting back and see if the Devils can crack a defensive shell and/or a hot goaltender.  That's why I'd like to see the Devils get more production earlier in the game so they don't have to do this so often as well as re-focus their efforts on defense.

To help prevent oppositions lighting up the Devils in the third, they would be wise to not only keep them off the scoreboard in the second but to play better positionally so they can't take as many shots in the second.  That would hurt their momentum as well as build confidence in the defense going into the third period.  It'll help prevent situations where the Devils absolutely, positively, have to tie it up or win the game in the third period and that would be helpful overall.

Likewise, the Devils' offense scoring more often in the first 40 minutes could lead to fewer games where their defense needs to be perfect as they mount a comeback from a lost lead or a deficit, something the Devils did in 5 of their 7 wins this season.   When the Devils aren't able to get the job done in the third period, they will suffer greatly until they figure out how to balance their scoring with respect to the period of the game.

Yet, just shooting alone won't be the answer.  The quality of the shots and the mentality based on the game's situation has to improve.

Would you like to see something like this more regularly?  Did this interest you in any way?  Was there something in the data that you saw that I missed?  Feel free to add your thoughts, questions, and criticisms in the comments.