Since the New Jersey Devils prepare for tomorrow's game against Buffalo, most of the news today focuses on the Devils' gameplan for tomorrow.  That will be covered in tomorrow's preview.  To pass the time, why not check out how the team's prospects are doing in their respective leagues?

Now, I've seen none of them actually play with their current teams.  So feel free to call this lazy, stat-sheet analysis.  Nevertheless, I took Hockey's Future's list of the Top 20 Devils prospects and looked up the stats for each player.  The only exceptions are Nicklas Bergfors and Matt Halischuk, as both are with the New Jersey Devils.  I also included some additional notable prospects in Lowell (e.g. Eric Castonguay) as well as the rest of the 2009 draft class to give a broader look at who is in the system.  That draft class, by the way, is now college-heavy on the lower end now that Curtis Gedig has committed to Ohio State for next year.  He joins Derek Rodwell as a 2010 NCAA committed player and Helgeson, who is already in with Minnesota.

The big chart comes right after the jump.  Please note that all stats were taken from the team's or league's respective sites as of October 27, 2009. 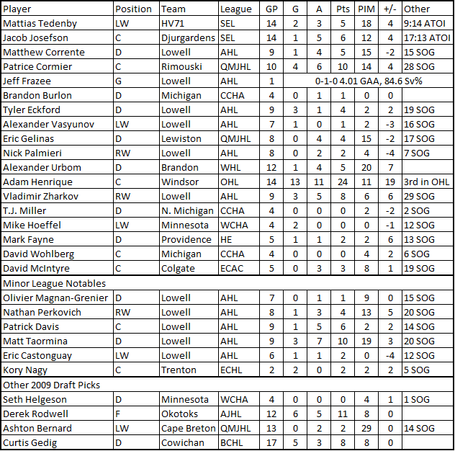 Notice that the current top scorer among HF's list of Lowell players is Vladimir Zharkov, who has continued his solid play after a solid preseason.  For the notables, though, Matt Taorima has been on fire with 10 points to lead the Lowell Devils in scoring - all from the blueline.   As far as Frazee goes, he's only played one game and as far as I know, still recovering from injury.  Mike McKenna and Gerald Coleman have been holding it down in Lowell in his absence.

Among junior players, Adam Henrique is currently, believe it or not, third in the OHL in scoring and second on his team behind the highly touted 2010 prospect, Taylor Hall.  The overage junior player is certainly enjoying his hockey in Windsor!   In other somewhat surprising stat news, Alexander Urbom is actually tied for third in the WHL in scoring among defensemen.  Go Urbom.

As far as the Swedes go, Mattias Tendenby and Jacob Josefson haven't lit it up, but per the SEL's site, is it more impressive that Josefson is given quality time at such a young age, or that Tedenby has been productive with such little time on HV71's third line?  Could it be both? (Aside: Tedenby's HV71 team has been killing it in the SEL with a 10-3-1 record to lead the Elitserien and with a +25 goal differential.)

If you have seen any of these players play, please, by all means, let us know how you think they are playing in the comments.