Share All sharing options for: The New Jersey Devils vs. the NHL Average in Goals by Period: 1997-2009

On Tuesday, I broke down the New Jersey Devils' goal scoring and goal conceding by period from this short season all the way back to 1997-98, the earliest season with available data from NHL.com.  In that, I found that the Devils are definitely slow starters in goal production and prevention this season relative to the averages of past seasons.   Moreover, I found that in general, the Devils consistently score fewer goals and let up fewer goals in the first period in comparison to the second and third periods.    This struck out more than the thought that the Devils have conceded more goals in the third than in any other period - which is true but often not by many more goals against in the second period.

would be to see a league-wide breakdown. is this a pattern consistent for everybody? if everyone’s scoring most of their goals in the 2nd/3rd periods, and/or conceding them then as well, this may be more of a statement about hockey in general, and less about the devils offensive woes. someone somewhere probably has situational stats for the league, although i couldn’t say exactly where to find it.

It's a very good criticism.  OK, so we know that the Devils have started off slowly relative to prior seasons and we know in what periods the goals - for and against - normally come from.   But is lower production in the first period a league-wide phenomenon?  If so, is it consistent over the same time frame?  That would answer the first question. As far as the second issue of offensive woes, how do the Devils stack up against the league in terms of goals for and against?

To answer this, I compiled the goals for and goals against per period numbers for each team from every season, starting from September 20, 2009 (this season, prior to that evening's games) all the way back to the 26-team league in 1997-98.   Read on for the full answer to those questions after the jump.

The first question is pretty simple to answer.  I took the league average in terms of goals per period and charted them to show the trend over each full season from 1997-98 to 2008-09.   Since all the goals scored by each team would be goals against for some other team, the title reflects that this applies to just "goals by period." 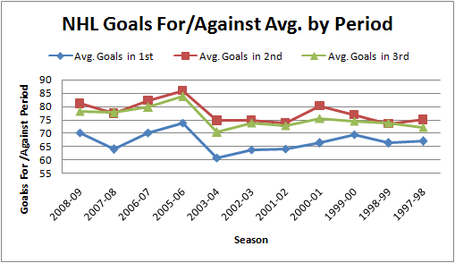 Immediately, we can see that the number of goals scored in the first period lags behind the second and third period in nearly every season.  The closest the first period comes to meeting the production of the other two periods comes in the 1999-2000 season. Even then, the difference in averages for the small gap between the first and third period from that season is still approximately 4.928 goals.  In addition, more goals are scored on average in the second period over the third period in most seasons.  There are two exceptions: 1998-99 and 2007-08, and those differences aren't large at all.

So the Devils not scoring many goals or letting up as many goals in the first period as they do in the other two periods follows the league's average in past seasons.  Sure, there are some teams who break that mold in some seasons; but averaging out each team's goals for and goals against bears out this trend.   Therefore, it should not be something to be really concerned about.

Now, I've done this kind of chart for each season, so if you're really interested in seeing the team's rank for each period for both goals for (GF) and goals against (GA), then feel free to ask and I'll put it up as an addendum later on. 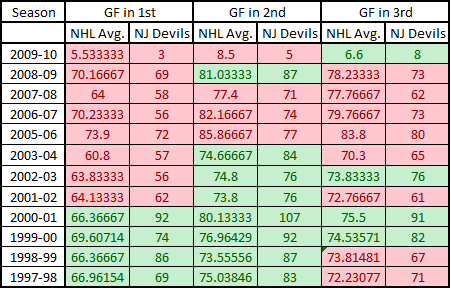 This is mitigated by the fact that the Devils were quite successful in those regular seasons; as well that the Devils weren't far off from the average in some periods.  Yet, this suggests to me that a lot of credit for the team's success should go towards the Devils' defense and Martin Brodeur. After all, if scoring goals is a problem, then you better be on point in your own end.  And the Devils traditionally have that down to a "T."  Here's how it breaks down for goals against: 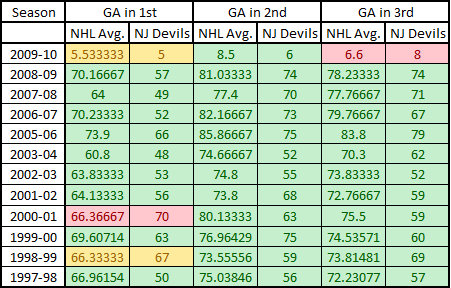 Look at all that green.  Only in one period in a full season did the Devils perform worse than the average by more than a goal and that was all the way back in 2000-01 for first period goals against.   In some cases, most notably the 1997-98, 2002-03, and 2003-04 seasons, the Devils performed well under the league's average goals given up in a period.   Keep in mind that this has held true despite changes in players and coaches, making this chart a true testament of the success of the organization's emphasis on team defense.

Lastly, I've made graphs for each period to see if there's any trends - whether or not the Devils have been better or worse than the average for a consistent number of years in each period.  For these, I kept the charts to full seasons only so I can compare total goals for/against instead of averages by period. 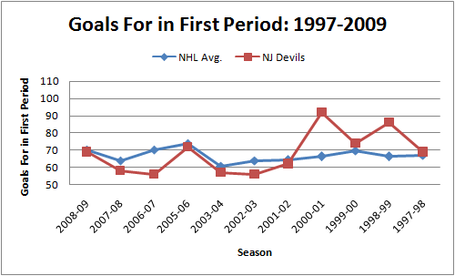 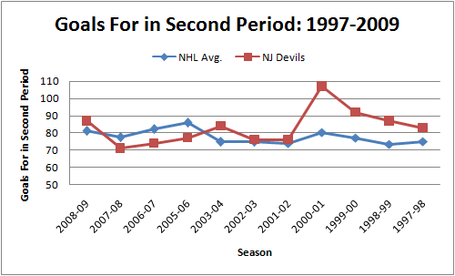 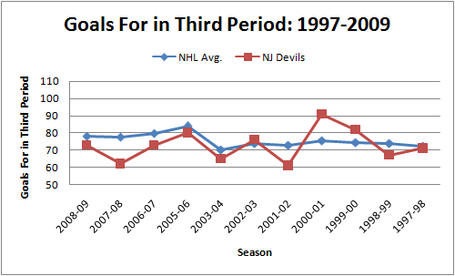 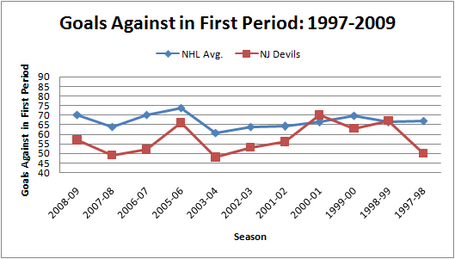 In terms of goals against, the Devils keep it on the down low.  Only twice did they break the league average, in the 2000-01 and 1998-99 seasons. Yet only in 2000-01 was it a significant increase.  For all other seasons, the Devils have been relatively really tough to beat early in terms of goals.  Even after a rise in 2005-06, the Devils got that number down to some of their lowest levels in the last 11 full seasons.  This is a trend I'm sure we'd like to see continue. Therefore, the Devils would be wise to tighten up early on in the game, even though the first period goals against all came in 3 games (1 by Philadelphia, 2 by the Rangers, 2 by the Capitals). 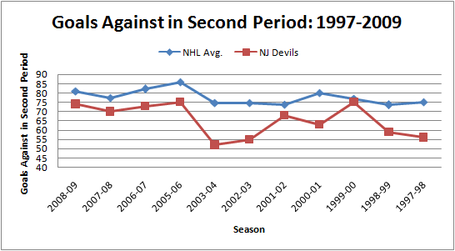 The same goes for the second period goals against, only the difference is even starker.  In no season since 1997-98 did the Devils concede more second period goals than the league average.   One trend I'm noticing is that the Devils have allowed more goals against since 2003-04, and unlike the first period goals, it hasn't gone down considerably. That said, it's still noticeably lower than the league average, and that's worthy of praise in of itself. 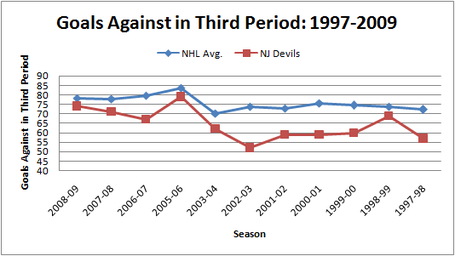 Overall, I think this clears up a lot of the underlying questions that one could raise from the initial post I made on the Devils' goal production by period.  The NHL, on average, sees fewer goals in the first period in comparison to the second and third period.  Generally, it's the second period that usually has more goals scored/given up on average.

The only remaining question beyond all this is the same one I had in the last post:  Why are goals seemingly harder to come by in the first period as opposed to the other two periods?  This whole exercise showed that this is a league-wide phenomenon.  Therefore, is the reason for lower goal production in the first period league-wide, or is it specific for each team (or a group of teams)?  Beyond that, I don't think this gets us any closer to answer.

Now it's time, once again, to have your say.    I would hope that it at least you found it interesting - I certainly thank you for your readership.  Did any of these findings surprise you; did they confirm some of what you already thought about the Devils or the league? Do you have any guesses as to why the first period sees fewer goals for the Devils and the league on average?  Of course, please leave any questions, concerns, criticism, and other thoughts about this topic in the comments section.