Is This a Youth Movement? How the Current New Jersey Devils Roster Got to the Rock

Share All sharing options for: Is This a Youth Movement? How the Current New Jersey Devils Roster Got to the Rock

With the big news yesterday of Brendan Shanahan announcing that he will leave the Devils - effectively cutting him from the roster - the Devils are now currently at 22 players on their active roster with 3 players on IR.

A constant theme among Devils fans since this past July has been the thought of a "youth movement."  This fanpost by thejerseydevil back in July touches on this idea, for example.  The Devils gave prospects a chance to make the team last month; and, well, some actually did - which at least partially explains why Brendan Shanahan will leave.

But is it really a youth movement right now? Back in October last season (and before Shanahan even thought of signing with New Jersey), James Mirtle calculated the average age of each NHL team and found that the Devils were the third oldest team with an average age of 29.65.   For a quick and dirty comparison, I took the current ages of Devils on the roster to see how "young" this youth movement actually is at this point in time.

As a bit of a "did you know," I figured it would be interesting to include how each got into the Devils organization for this season.  Just to see how many were free agent signings, draft picks, and acquired by trade.   Believe it or not, most of the lineup are free agents, but it is only a plurality.  Should the 2009-10 version of the New Jersey Devils perform well with this lineup, it speaks well (or continues to speak well) of their drafting in the past. 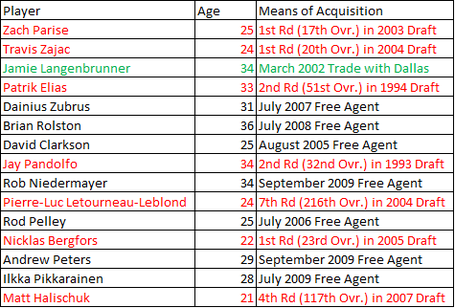 I've included current IR holders Patrik Elias and Ilkka Pikkarainen on the basis that they will likely be on the roster to play one game.  We know Elias definitely will play and Pikkarainen's on a one-way contract, so I doubt he goes straight down to the minors. Hence, this is a list of all 15 forwards, even though the Devils will only be able to have 14 should they only keep one defenseman.

The average age of all 15 forwards is 28.333.  Removing Elias and Pikkarainen drops it to an even 28 years old.  In terms of how the forwards got here, Langenbrunner was the sole arrival from a trade. Specifically, the 2002 deadline deal that saw Jason Arnott, Randy McKay, and a first round pick go to Dallas in exchange for the current captain and Joe Nieuwendyk.   The rest is evenly divided between those who were drafted and those who were signed as free agents.   Three first round picks and

One additional "fun fact:" Rod Pelley and David Clarkson were never drafted.  Pelley was signed right out of college and into the organization after his senior year. Clarkson came through then-AHL affiliate Albany after playing out his junior career in Kitchener.

I didn't include Mark Fraser, who is on IR with New Jersey, under the assumption that he'll be sent down once he is activated.   For what it's worth, Fraser would add another Devils draft pick to the blueline (third rounder in 2005, making it 3) and reduce the average age to 28.875 years.

But without Fraser, the blueline is more of a result of free agents; only 2 were drafted and they were second round picks.  Also, the range in ages is much more compact than the forwards. Greene is the "young" man at 26, but most of the unit is in their prime as the "elder statesman" of the group is Bryce Salvador at a not-so-old 33.   Salvador, of course, came to New Jersey in a straight up deal with the Blues for Cam Janssen in February 2008.  A deal that still makes me smile looking back at the transaction.

Here's another "fun fact." Johnny Oduya actually was drafted - he was a seventh round selection by the Washington Capitals in 2001. He was drafted 221st overall and ultimately never signed a deal with the team (or, the team didn't offer him a deal). Anyway, Oduya continued playing the SEL before getting a contract with the New Jersey Devils.  So he was a free agent pick up, but not technically an undrafted player.

Well, Martin Brodeur represents only the fourth first round draft pick by the Devils on the roster and, unsurprisingly, is the longest tenured Devil on the roster.  Danis joined up with New Jersey just this summer.  Since he's not young and Brodeur is old, the netminders have an average age of 33.

Including the three players on IR -Elias, Pikkarainen, and Fraser - the Devils have a current average age of 29.125 years.  Excluding the three on IR and it drops to an even 29 years old.  In both cases, the Devils are younger on average than last year's roster.  Not by a big amount, but they are currently younger than last year's team on average. We can honestly say that this is a youth movement.

As an added bonus, this team also can properly proclaim "the kids are alright and they are here" because the Devils could have an actual rookie season from a player in Bergfors (and if he impresses early, maybe Halischuk).

That said, as contracts run out and players move on (or get moved), I don't think the youth movement is necessarily only for this season. Particularly for defense in the 2010-11 season. But that's a topic for another time.

In terms of how the players were acquired, 12 out of the 25 currently on the active roster or IR arrived from New Jersey via free agency.  That's 48% of these 25.   In addition, 4 of those free agents weren't in the NHL prior to being signed. Only 10 were drafted by the Devils (44% of the 25) and 4 of those were first round draft picks.  Further proof that it's not just the draft that's important, but who you sign.  Not even on the first day or first week in free agency either; but also for college seniors after their season ends, players on a tryout basis, and so forth.