Slow Starts: The New Jersey Devils & Goals For and Against by Period

Share All sharing options for: Slow Starts: The New Jersey Devils & Goals For and Against by Period

Earlier today, Cory Murphy has been sent down to the Lowell Devils and is currently available on waivers.  At practice, Tom Gulitti reported that the Devils have worked on the power play (which could really use it) and got more than a few words about Nicklas Bergfors, the Devils' frequent shooter yet goalless rookie.   All of these decisions all has to do one thing: offense. Lighting the lamp.  Putting biscuits in baskets.  Scoring goals for the New Jersey Devils.

Murphy was signed under the intention of providing points from the blueline and not only has he not done that in 3 regular season games, but he hasn't looked nearly as poised as Andy Greene has been on defense this season.  The power play is scoreless in it's last 15 man advantages; and put in only 5 out of 34 chances so far, oh, and none in any 5-on-3 situations. Bergfors has impressed on the second line with 24 shots (only Zach Parise has more with 33), and yet only has 2 assists to his name.   In total, the Devils have only scored a total of 16 goals in 7 games (no more than 3 in any game) while giving up 19.

Clearly, the offense is off to a slow start this season.   Hopefully, this will change.  What is interesting is that the distribution of goals by period show the Devils both scoring and conceding mostly in the third period.  This current fact led a Devils (and ILWT) fan to theorize that the Devils have recently been giving up too many goals in the third period.   In conjunction with all the offensive woes I just mentioned, I decided to take a look all the way back to the 1997-98 season to see where the Devils scored goals and let them up.

Amazingly, the beginning of this season isn't the only place where the Devils seemingly get to a slow productive start.  Despite changes in coaches, players, and the league as a whole, the first period isn't kind to New Jersey or their opponents.  The Devils have scored most of it's goals in the second period in 9 of the 11 past seasons, with one season where the second and third period scored exactly the same amount.  In terms of giving up goals, the third period saw the most against 5 of the previous 11 seasons.  Read on to see how it breaks down and where the Devils are trending so far this season.

Here's the raw numbers of the goals by period breakdown from this season all the way back to 1997-98.  All numbers come straight from NHL.com. 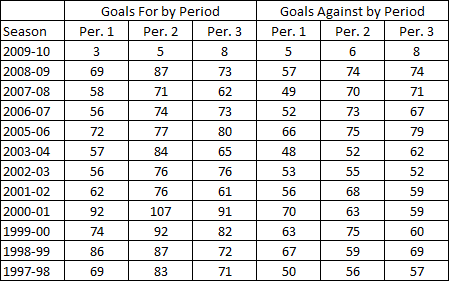 Now, this season is already starting off contrary to the Devils' offense in the past 11 seasons.  The Devils have generally scored most of their goals in the second period, then the third period, and then first period.  In some seasons, there's a very stark difference between the first period and the other two. Such as the 20 goal differential between the first and either period in 2002-03, or the increase of 18 goals in the second period over the first.

In terms of giving up goals, amazingly, the same situation occurs.  The Devils concede more in the second and third periods than in the first period.  As much as 21 goals, as in the case of the 2006-07 and 2007-08 seasons.  Here, no one period really dominates as the "worst" period for giving up goals.  Since the lockout, the third period has yielded the most goals given up in 3 of the past 4 seasons; but the difference between the second and third period isn't all that much.   In fact, last season saw the Devils gave up as many goals in the third period as they did in the second period.  But before the lockout, it was split down the middle between the two periods; with the first period seeing the most conceded in 2000-01 as the lone exception.

Now, to take this season's results into account, I decided to take the average goals for and goals against per period and charted each. This way we can better see how the various seasons compare and see where the Devils currently stack up.  I understand it's only been 7 games for the Devils so far, and that skews things; but we can only look at data we have instead of guessing at the future. 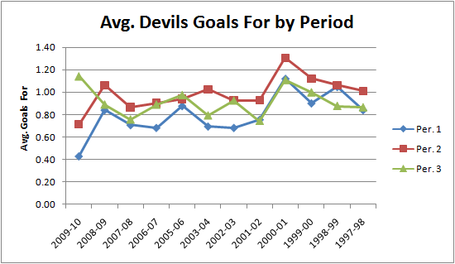 It's quite apparent that the Devils are definitely starting off this season slowly in terms of offense.  But this should clearly show why Lemaire is focusing on the power play, talking about Bergfors' shot placement, shifting lines around, and all of these other efforts. The goal production is currently not where it should be.  While the Devils don't tend to score many goals in the first period in previous seasons, it was never as bad as it has been in the team's first 7 games so far this season.   This has to be corrected.  Especially when the Devils have good first periods where they dominate the other team in terms of shots (e.g. 10/10 against Florida, 10/16 against Atlanta)

The second period is also of concern, as the current average is much lower than in prior seasons.  The third period, in contrast, is much higher than past seasons and that's mainly because the Devils had to come from behind or seal the game in the third period in each of their 4 wins this season. 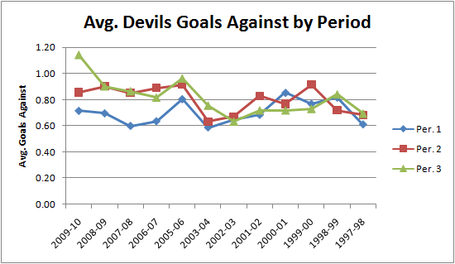 Looking at the other direction, this is a bit different. The third period is far higher, mainly the contribution of the opposition either blowing up in the third period (e.g. 10/3 against Philadelphia, 10/16 against Atlanta).  Yet, the averages in the other two periods aren't that far off from recent seasons.   Perhaps this is why we're not seeing reports from Gulitti or Chere of the Devils focusing on defense throughout practice?

This chart also further confirms that there isn't really a sure sign that the Devils are significantly worse in the third period than the second period in recent seasons when it comes to giving up goals.  This is season is the big exception, of course; and the Devils do need to work on that. You'll notice in earlier seasons that the averages are more varied for goals against instead of goals for in terms of what period leads in that stat.

All of this leads to a larger question: why do the Devils tend to score less goals in the first period than in the other two?  Why are they consistently slow starters in producing across a whole season?  Why are they consistently better at keeping the puck out of their own net since the lockout in the first period than in any other?  It can't one person or a core of players; as so much has changed from season to season - especially at head coach.

To this, I can only give an educated guess.  The first period of a game is where a tempo to the game overall is established.  You'll notice who's playing well, who's hustling, what the goaltender's tendencies are, and who's looking like they are a step behind across all players from both teams.  You'll see initial strategies and plans come into action and in that sense, it can be a feeling out process. Once teams are familiar with what's going on, both teams try to make adjustments to their lines, their defensive patterns, their gameplan, and in other aspects of the game.  And as such, they have more knowledge on what needs to be done to succeed and so the goals come - at both for and against the Devils.

But that really is a guess as it's a very difficult question.  Either way, the Devils still have to get more productive on offense.  I, for one, really do not want current trends to hold.  Even if past seasons show that the offense isn't as productive in the first period; but it needs to become more proficient overall.  This way the Devils can build leads and so one or two goals in the third period don't kill the game for the Devils.

If I had made a mistake, if you need something to be clarified, or you want to add your two cents on this topic, please put them in the comments so we can discuss this further. Thank you for checking this out.  I hope this at least showed some insight into what past teams did, what past teams are doing, and why the Devils are working on offense more often in practices these days.