Hits and Wins: So Far, So Good, So What?

Share All sharing options for: Hits and Wins: So Far, So Good, So What?

The New Jersey Devils aren't necessarily a team that avoids physical play, but it begins to wonder how the Devils respond in a physical game.  From the last post, Blez had this interesting theory in a comment:

They went from playing incredible hockey to playing some of the worst, listless hockey I’ve seen from them in some time. And my theory is that they had quite a few very physical games in a row. The Rangers, Blues and Stars games were all incredibly physical games and I think it took its toll. You couple that with the fact that this team has suddenly played a lot of games in a short time span and you see the kind of hockey they’ve played because of it. Even Parise, who is usually darting and dashing everywhere, seems to be a step slower these days.

Well, let's test this theory out by seeing how the Devils look in giving and receiving hits so far this season.   Here is a caveat, I'm mostly using the hits recorded on official super stats at NHL.com.  I am most definitely aware of the issues surrounding this approach.  It isn't always clear to assign whether a player successfully hit someone or got hit by someone.  Some teams are very particular about this and it's why you see some fairly physical games end up only having an official total of 20 or less hits.  Conversely, you see some teams (I'm looking at you, Rangers) get massive bumps in the hit column when they play at home.

Now, some sites have attempted to provided an "adjusted" hit stat: like here at Hockey Analysis.  The fellow there (I didn't see a name, sorry), came up with a method to adjust them and it bumps the Devils 652 hits up to 775, which puts them 15th in the league on the adjusted scale.  As comparison, the Rangers' 1152 hits gets adjusted down to only 817.  Unfortunately, I only bring this up as additional information to support the idea that the Devils aren't particularly physical or non-physical. They got some guys who like to throw the big hits (Mike Rupp, David Clarkson, Colin White), but it's not prevalent up and down the roster (Mike Mottau, Paul Martin, Brian Rolston).

Anyway, what I wanted to see were two things: First, does Blez's theory hold up? Was he right in stating the Devils have played some very physical games recently and, if so, whether that could be a cause for why they have been so sloppy.  Second, and the larger question at hand, how do the Devils perform with respect to hits in a game.? Since I compiled hits on a game-by-game basis, I am forced to use the official numbers from NHL super stats report, as questionable as they are.  I'm not familiar with how Hockey Analysis adjusted their numbers, nor do I think they are feasible from game to game. Short of coming up with my own metric and re-watching every game, which is nigh impossible, we'll just have to make do with this.

An attempt at analysis follows after the jump, trying to see if there's any connection between hits and wins.  I am also assuming that we care about wins here, not ties or shootout losses to simplify matters; and that winning a game is proof of a better performance than a loss (which is part of the point of counting wins to begin with).  I think you'll find this interesting.

Let's answer the initial question first: Yes the Devils have most definitely played some physical games as of late.  In fact, here are the hits from the past 6 games:

That's a total of 258 and, unless I'm missing something, that's the most in any 6 game stretch this season.  And the Devils went 3-3 over those 6 games.  A couple stretches come close, though the results on the scoreboard were different.  The first 6 games of the season, where the Devils won 5 games, featured a total of 245 hits.  It even included the Devils' most physical game so far this season: the first Rangers game, which had 43 hits by the Devils (still a season high) and 37 by the Rangers.  And the Devils lost that one at the Garden.  There was also a stretch where the Devils won 5 out of 6 and had a total of 242 hits in those games.  The only way you can top the last six games' total is if you go back two games and include the Rangers' and the Penguins' games prior to St. Louis to get a grand 6-game total of 270.

My point with all this is that, yes, the most recent stretch of games has been brutal. However, there have been comparable stretches of games where the Devils have put up more wins.  Let's take it a step further.  In the last 6 games, the least physical game was the Montreal game where the Devils won 4-1.  I used the 20 total hit count as a metric to see how many games the Devils have played in where there were more than 20 hits.  They played 31 games, which is 77.5% of all games this season.  Of those 31 games, the Devils have won 16 of them - 51.6% of all of those games and a solid 69.5% of all wins by the Devils' so far this year.

From this, I can conclude that, yes, the recent struggles have been in some very physical games.  However, the Devils have had other series of games with lots of hitting and have come out winners more often than not.  Moreover, the majority of their wins come in games where there's some decent level of hitting going - in fact, most of their games involve some team throwing out a good number of hit.  That all said, I think we also have to consider the symptoms of the team's sloppy play: poor special teams play, errant passes, too much patience on scoring chances on the rush, not enough patience in cycling the puck, conceeding possesion.  I don't think it's a result of the other teams hitting the stuffing out of them.  In fact, the game that had the biggest deficit in hits was the best one they've played since December 30, the 4-1 win over Montreal.   So, Blez, you're partially right.  In terms of the bigger question, the numbers don't agree, though.

The average number of hits between wins and losses, as well as home and road games, is particularly telling: 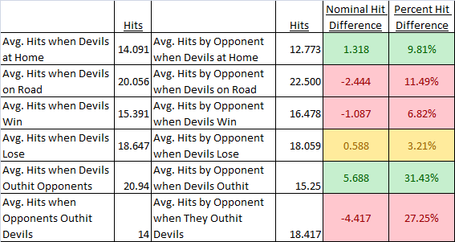 There's plenty to conclude here. The Devils put up the body more on average on the road and in losses. Only at home do they average more than a hit than their opponents.  In addition, when one side is leading in hits, on average, it's a pretty big lead.

Regardless, there isn't much of a correlation that I have found between the Devils hitting and the Devils (eventually) scoring more goals than the other team.  Given the Devils' tendency to cycle the puck down low and start their attacks by winning possession off the boards, this makes some sense.   The Devils are in the fray and fighting those battles, throwing those checks regardless of whether they can put the opposing defense to the sword or be lame like they have been in the last 2 games.  I don't think the answer to the Devils' woes will be to play more (or less) physical and/or beat up on their opponents.

In any case, I hope you all thought this was at least somewhat interesting.  Should you find an error or have a question or a comment or some other though, please let me know.  I go through all this effort to at least shine some light on a subject.  And, of course, answer the questions at hand.