A Response to Tonight's 5-1 Win

Share All sharing options for: A Response to Tonight's 5-1 Win

In lieu of the standard postgame Quickie Thought fanshot; I figure I do something a little different.  Nevertheless, here is the NHL.com recap for your access to the straight story, boxscore, and stats.  IPB did a running game diary of tonight's game,  Gulitti did a live blog as well.  For a perspective from the other side, Sherry at Scarlett Ice scolds her favorite hockey team for being awful.

Did the Devils outclass the Ottawa Senators overall throughout the game? 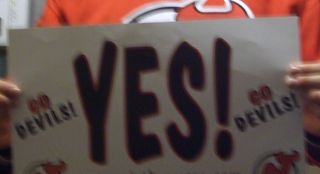 Were Patrik Elias and Zach Parise magnificient, as justified with 4 point games?

Was it not amazing to witness not one, not two, but three power play goals by the New Jersey Devils?  In one game?

Will we see three power play goals from the Devils anytime soon?

The only real downer within the game was the shorthanded goal by Jarkko Ruutu of all people.  However, it can be forgiven given how well the Devils did, especially in finishing plays, right?

Lastly, was that sign was handed out at the end of the game as a promotion for a movie?